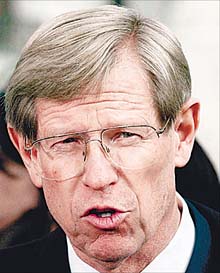 (APJP) — Five times in just the last eighty years, conservative Republicans have assaulted the Constitution in order to grab power they couldn’t gain at the ballot box. Theodore Olson was at the center of three of those five plots. In 1933, conservative industrialists conspired to topple Franklin D. Roosevelt through a military coup. They picked Marine General and Congressional Medal of Honor winner Smedley Butler to command the uprising, after which Roosevelt would be forced out through chicanery and deceit, and a fascist government would be imposed. The plot was only foiled when Butler went public and told all.

In 1972, facing re-election, Richard Nixon deployed an intermediary named Anna Chenault to go to the South Vietnamese and convince them to wreck the Paris Peace Talks so that the war would be extended. Nixon was re-elected, and twenty thousand more Americans died — a sacrifice to the brutal quest for conservative Republican power.

In 1988, when President Reagan left office, Theodore Olson became his personal attorney and represented him in matters relating to the Iran Contra scandal. Olson monitored Reagan’s testimony throughout the investigations and hearings, a central and indispensable figure during the examination of the extra-Constitutional power grab effected by conservative Republicans.

Shortly after President Clinton took office in 1993, a loose cabal of conservative Republicans plotted to drive him from office. The same Theodore Olson, and his wife Barbara, were at the core of the effort, which nearly succeeded in deposing a popular, duly elected president against the expressed will of the American people.

In 2000, Theodore Olson represented George W. Bush as conservative Republicans seized the presidency by forcing Florida to cease the counting of lawful votes through the machinations of the conservative Republican majority of the U.S. Supreme Court. Olson, again, was central to the effort — a successful coup d’Žtat. In return for his three glorious services to the power grabbers (and other services rendered), the conservative George W. Bush appointed Theodore Olson to the position of Solicitor General of the United States, in which capacity it would be his duty to represent the interests of the United States before the Supreme Court.

In the hearing for his confirmation by the Senate Judiciary Committee in May, Olson was less than candid about his partisan activities against President Clinton, and sought to minimize their significance. Democratic senators asked for clarification of his role in the Arkansas Project, a plot against the Clintons that funneled millions of dollars through the tax-exempt American Spectator magazine’s education fund. The money was used to develop scandals with which to smear the Clintons. As the senators’ questioning focused on the subversive plot, the vast covey of GOP first responders began a barrage intended to intimidate Democrats — the same kind of verbal warfare they have deployed to quash and threaten Americans who protected Roosevelt, or who voted for Al Gore, or who questioned the truthfulness of Oliver North, or who protested the continuation of the Vietnam war.

On Thursday, May 17, conservative Republican attorney Joseph diGenova wigged out on CNBC’s Rivera Live, attacking former conservative author David Brock (who now bears testimony against Theodore Olson’s truthfulness about the years at American Spectator when they both worked to harm the Clintons). DiGenova, eyes bulging, face contorted, hand jabbing at the camera, screamed down the presentation of evidence damning to Olson.

“Stop it! Stop it now! Shame on you! You know better! Evidence, my fanny!” The tirade went on each time Brock and investigative author Joe Conason attempted a declarative sentence. DiGenova heaped ridicule and insult on Brock, claiming that no one would believe Brock’s words, and that it was all “silly.” Other conservative Republicans who participated in the coup attempts took to the corporate-owned press, which was all too willing to be of use and all too afraid of exposure for its own complicity with conservatives.

And ultra-conservative coup player Lucianne Goldberg trashed David Brock, previously outed as gay by Internet gossip and impeachment player Matt Drudge. On her right-wing web site Goldberg warned Brock to back off on Olson, saying that embarrassing photos are “out there.”

Flash back to 1933. A “villager’s chorus” of right-wingers came forth to attack Roosevelt and then to destroy those who exposed the coming coup d’Žtat. At the same time the fascist plot was moving forward, a “policy advocacy group” called the American Liberty League was being formed, its executive ranks stacked with cronies of the financiers and industrialists — some of them open admirers of Mussolini. When the plot against Roosevelt was exposed, and the conspirators were named and the deeds described and the hearings begun before Congress, the “chorus” began the bitter defense through offense, printed on the front page of the New York Times. (The account of Butler’s expose was relegated to inside pages.) “Perfect moonshine! Too utterly ridiculous to comment upon,” said Morgan partner Thomas Lamont. “A fantasy! I can’t imagine how anyone could produce it or any sane person believe it. It is absolutely false as far as it relates to me and my firm, and I don’t believe there is a word of truth in it with regards to Mr. MacGuire,” said Grayson Murphy. “It’s a joke! A publicity stunt! I know nothing about it. The matter is made up out of whole cloth. I deny it completely,” said Gerald MacGuire. “He had better be pretty damn careful. Nobody said a word to me about anything of this kind and if they did, I’d throw them out the window. I know nothing about it,” said Hugh Johnson. http://members.tripod.com/~american_almanac/morgan3.htm

And so you see how familiar and constant the plots and the plotters are, through the long decades of conservative assaults. Same dynastic families. Same corporate moguls. Same bitter ideologues, same impotence translated into treachery, same modus operandi, same brazen tricks, same old chimera, same defenses, same old words – a pattern that amounts to the same old conservative playbook of anti-democratic, totalitarian solutions through which to impose rigid conservative ideology on the unwilling American people.

Same old Theodore Olson, for whom the same old Washington press corps whores itself, again, as the same old chorus of Capitol Hill crows screeches out attacks via C-SPAN. Chairman of the Senate Judiciary Committee Orrin Hatch (a co-member of the Federalist Society conservative advocacy group with diGenova and Olson) got snippy when Democrats showed determination: “Who the hell cares about the Arkansas Project, anyway?”

Neo-Fascists on the Move from Vancouver to Eugene
Jun 13