Reporters without Borders Press release
27 May 2010 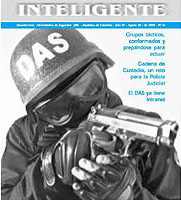 Three years after an on-the-spot investigation into paramilitaries (“Paramilitary ‘black eagles’ poised to swoop down on press”), a Reporters Without Borders delegation went back to Colombia from 10-16 May 2010 chiefly to probe a witch-hunt carried on during President Alvaro Uribe’s two terms in office against critics of the government and its “national security” project.

Among those targeted, from what is known so far of the official investigation, were 16 journalists working for around a dozen media. It is the results of this investigation that we are releasing today, 27 May 2010, three days before the first round of the presidential election to choose Uribe’s successor.

Far from limiting itself to phone-tapping (chuzadas), the scandal extended to tailing individuals, acts of sabotage and intimidation often hatched by those who were supposed to be protecting journalists under threat, combined with “black propaganda” vilifying opposition figures as “enemies of the state”.

The case has thrown into question the future of the country’s top intelligence service, the Administrative Department of Security (DAS), identified as being behind these practices. It also reaches into the presidency, whose incumbent did not hesitate to make public accusations against journalists, even though it made their position even more precarious. The scandal continues to echo today in a tense election campaign played out against the legacy of the Uribe years.

Journalists, media editors, press freedom defenders, and election observers have all pieced together the truth of what happened as witnesses or victims. The organisations involved also managed to get access to the current director general of the DAS, Felipe Muñoz.

Another report will be published tomorrow, 28 May, by the World Association of Community Radio Broadcasters (AMARC), whose president for Latin America and Caribbean accompanied Reporters Without Borders on its visit to Colombia. It is based on information obtained during a visit to the community media on the Atlantic coast and the Andean region of Cauca. The accounts of representatives of these media, legally recognised but getting scant respect from the authorities, underline the difficulties journalists face working in the regions and the press freedom contrasts in Colombia. Indigenous journalists in Cauca, caught in the crossfire between paramilitaries, the army and FARC guerrillas, reminded us that the conflict that has destabilised the country for half a century is not yet over.