How Nazi War Criminals Got Into Canada

" ... Canada's do-nothing policy about Nazis over the next 40 years was influenced by a persistent anti-Jewish bias within the federal bureaucracy. ... As war criminals were being let into Canada, their Jewish victims who barely survived the Nazi Holocaust were strenuously kept out. ... " 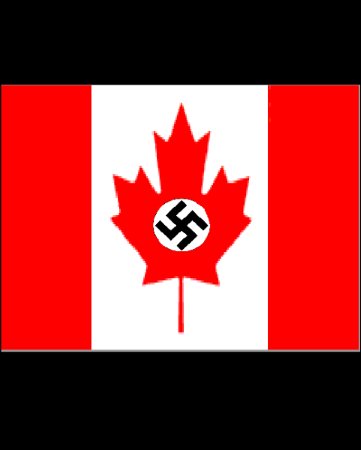 As the nation honoured its war dead this week, some who gave their lives for freedom were still left with an ironic injustice. Though Canada played an outstanding role in the Allies' success in World War II, a number of Nazis who committed war crimes against Canadians fighting overseas were allowed later to immigrate here and remain unpunished.

The Canadian Armed Forces held post-war trials in Germany. But further prosecutions were to be handled by the British military. They were soon stopped. And Canada failed to bring to justice any of those accused against the Canadian military even when some were later found living here.

Historian Alti Rodal says this is part of "Canada's complicity in crimes against humanity."

Strong charges, especially since Rodal was chief historian for the 1986 Deschenes Commission of Inquiry on War Criminals. She wrote a 580-page report on how Nazis were virtually welcomed into Canada and how successive governments ignored allegations of war criminals among them.

A federal government consultant, Rodal is currently writing a book based on her findings and new research - Other Priorities, to be published by Malcolm Lester Books.

Though Justice Jules Deschenes called for wide distribution of her report, Ottawa first buried it, then released it heavily censored. Even the bureaucrats must have been ashamed of its evidence of authorities caving in to pressure, of racist political decisions, and of investigators' incompetence. Other historians have since pursued the story. Here's just part of what Rodal and others uncovered:

In 1948, the government agreed to a top-secret deal with Britain to stop all war crimes trials and turn their focus to the Cold War with Russia.

According to John Loftus, former prosecutor for the U.S. Nazi-hunting unit, the idea of bringing Nazis to North America came from double agent Kim Philby, a Communist mole highly placed in British intelligence.

Philby's scheme was to create an anti-Communist network in the West, then to sabotage their efforts by reporting their plans back to Moscow. Canada was the destination for the Nazis, wrote Loftus as 1991 co-author of Unholy Trinity.

Politicians were successfully lobbied to accept Nazis as immigrants by an umbrella group of Canadians of German background, says Rodal.

By 1951, former members of the Nazi party were admitted to Canada. By 1955, members of Hitler's murderous elite SS force were accepted. Other groups of immigrants were granted waivers by the immigration minister, again following intense pressure from people representing huge voting blocs in Canada, says Rodal.

Latvians, Lithuanians and other East Europeans were accepted under "bulk labour programs" with no attention to their wartime military activities.

Special dispensation was granted to former members of Waffen SS groups who fought alongside the German Wehrmacht - without scrutiny.

A number of alleged French Nazi collaborators got ministerial waivers after a campaign by influential members of the Quebec elite, Rodal says.

Bob Keyserlink, a University of Ottawa history professor who did immigration screening in Bonn, Germany, in the early 1950s, says officers were given the attitude to "forget the past" when interviewing applicants.

"If he told you he was an SS officer and the regulations allowed members of the SS, that's all we asked. It was up to the Royal Canadian Mounted Police to do a security screening."

But RCMP staff sent for the task had, Keyserlink says, "a Grade 10 or 11 education" and backgrounds in jobs like highway patrol. "They didn't know a Hungarian from a Bulgarian. They didn't ask the right questions."

Canada's do-nothing policy about Nazis over the next 40 years was influenced by a persistent anti-Jewish bias within the federal bureaucracy, Rodal says. As war criminals were being let into Canada, their Jewish victims who barely survived the Nazi Holocaust, were strenuously kept out - blatant discrimination documented by historians Irving Abella and Harold Troper in their book None Is Too Many.

Rodal also speaks of the "prominent role Pierre Trudeau played as justice minister and as prime minister in making sure no action was taken against war criminals, all the while promoting a "Just Society."

For Canadian veterans who were war crimes victims, getting out the story of why justice was denied them is an appropriate tribute for future Remembrance Days.