By Jerry Markon and Stephanie McCrummen 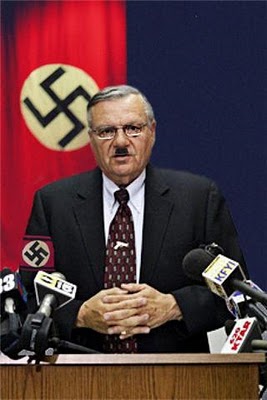 A federal investigation of a controversial Arizona sheriff known for tough immigration enforcement has intensified in recent days, escalating the conflict between the Obama administration and officials in the border state.

Justice Department officials in Washington have issued a rare threat to sue Maricopa County Sheriff Joe Arpaio if he doesn't cooperate by Tuesday with their investigation into whether he discriminates against Hispanics. The civil rights probe is one of two targeting the man who calls himself "America's Toughest Sheriff" -- a federal grand jury in Phoenix is examining whether Arpaio has used his power to investigate and intimidate political opponents and whether his office misappropriated government funds, sources said.

The standoff comes just weeks after the Justice Department sued Arizona and Gov. Jan Brewer (R) over the state's new immigration law, heightening tensions over the issue ahead of November's midterm elections. It focuses renewed attention on Arpaio, a former D.C. police officer who runs a 3,800-employee department, and a state at the epicenter of the debate over the nation's estimated 12 million illegal immigrants.

Once seen as a quirky figure who dresses inmates in pink underwear and forces them to work on chain gangs, Arpaio has in recent years become a kind of folk hero to those favoring his heavily publicized "crime sweeps,'' conducted mostly in Hispanic neighborhoods. At the same time, civil rights groups accuse the 78-year-old lawman of racial profiling. And some Maricopa County officials say Arpaio has launched meritless corruption investigations against officials who have criticized his policies or opposed his requests.

Those allegations are at the core of the Justice Department investigations, according to documents, lawyers familiar with the probes and people who have been questioned by FBI agents and the grand jury. ...