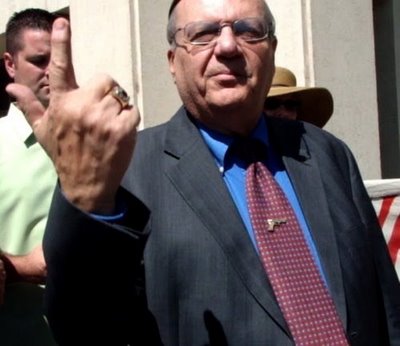 Arpaio: Always on the hunt for "dime droppers"

Want more proof that Sheriff Joe Arpaio is a cross between Tricky Dick Nixon and Vincent "the Chin" Gigante? Take a gander at the Bobby Wetherell affidavit.

Much of the local media continues, bass-like, to be impaled on the hook of Deputy Chief Frank Munnell's loving memo to Sheriff Joe, informing him of all the dastardly stuff going on in his office, as if it's all news to the jefe.

This would assume, of course, that Arpaio had never read a paper in 17 years, like, you know, New Times, maybe. But, oh, he does read his negative press. And he reads closely.

His office has retaliated against those it suspects of gabbing to reporters. Arpaio himself has long been obsessed with rooting out "dime-droppers" in his ranks and making their lives miserable.

Ironically, Munnell himself could be considered one of those "dime-droppers." I have an inkling that he is the one that leaked his memo. And to tell you the truth, it wouldn't surprise me if Arpaio gave him the dime.

As I suggest in my recent Bird column, Munnell's memo is a little too convenient for Arpaio. Back in the Watergate days, Nixon advisor John Ehrlichman would have called it a "limited hangout." Read the column for an explication.

The Wetherell affidavit, linked to above, makes it quite clear that Arpaio has run his office like Joe McCarthy on overdrive.

Back in 1996, Lieutenant Wetherell was tapped by then MCSO Director Hendershott to investigate Sergeant Mark Battilana, who was suspected by Hendershott and Arpaio of being a source for a New Times story by Tony Ortega. (A suspicion New Times never confirmed or denied.)

Read Ortega's story "Insider Account," for background on the affidavit.

Basically, Wetherell accuses Hendershott of a number of familiar transgressions: offering up rewards for the testimony he wanted from potential witnesses, altering statements from witnesses, threatening witnesses, spying on witnesses, retaliating against witnesses, and making misleading statements under oath, among other illegal activities.

The end result was that Battilana was fired because of the trumped up inquiry. Wetherell later resigned and spilled his guts in an affidavit on Battilana's behalf.

There's some juicy stuff in this document, like Hendershott meeting with Wetherell in the parking lot of a Circle K, mafia-style, door-to-door, without either man exiting their respective vehicles. This, according to Wetherell, so Hendershott and Wetherell would not be seen together.

Also, Hendershott, Wetherell, Arpaio's chief flack Lisa Allen, Tom Bearup (still with the MCSO as Arpaio's right-hand man at the time), and Arpaio himself supposedly met at an old, rented-out house to discuss how they could retaliate against those who were not cooperating with the vendetta against Battilana.

"Director Hendershott told me that I was to be at the meeting because they needed to know which individuals were not cooperating in giving damaging information against Mark Battilana," Weatherell wrote, "and who the dime droppers were so they know who to transfer. Sheriff Arpaio stated that we must put the dime droppers where they could not do any damage."

So Arpaio was in on it, according to Wetherell. (In Ortega's story, Bearup tells Ortega that he distinctly remembers the meeting.) Additionally, Wetherell had this to say about Arpaio's involvement:

This mirrors what Tom Bearup and others have had to say about Arpaio's direction of his office. Arpaio was and still is in control of the MCSO, no matter how the media attempts to portray him as an echo of an Alzheimer's-incipient, post-Iran Contra Ronald Reagan.

In fact, Arpaio's obsession with Bearup, who left the MCSO in 1997, is evident in Wetherell's affidavit, as in this passage:

According to Wetherell, Hendershott and Arpaio rushed to get a transcript of Bearup's testimony after he'd given it so that they could pore over it together.

And Wetherell informed Ortega, now the editor of the The Village Voice, how "Arpaio and Hendershott made daily calls to me about what they wanted done."

Arpaio and Hendershott. Hendershott and Arpaio. Joined at the hip in iniquity, like the Sith.

In the affidavit, Hendershott makes it plain to Wetherell that he's doing his dirty deeds on the sheriff's behalf.

"The dime droppers are going to learn that if you fuck with the Sheriff, you die," Hendershott says at one point in the document.

Wetherell recalled Hendershott saying, "We have to protect the Sheriff from dime droppers," and, "We will make an example of Mark Battilana so that these fucking dime droppers will keep their fucking mouths shut."

Interestingly, Wetherell told Ortega at the time that Hendershott began to target the lieutenant after he began to raise questions about the pink underwear money.

One of those to whom Weatherell says he forwarded the info was none other Lisa Allen, portrayed as a white hat in the Munnell memo for supposedly warning Arpaio about Hendershott's misdeeds.

And people wonder why I'm skeptical of the Munnell memo.