When Sheila Polk, Yavapai County Attorney, considered what former Maricopa County Attorney Andrew Thomas and Sheriff Joe Arpaio were doing back in 2009, Nazi Germany came to mind. At least that's the implication in an article in this month's American Bar Association magazine, anyway.

Polk's now-famous letter in December of 2009 publicly condemning Thomas and Arpaio likened their dirty war against political enemies to "totalitarianism." The ABA Journal article shows where Polk's head was at when she wrote the letter: Since 2006, she'd been studying the Holocaust and how the Nazis perverted Germany's legal system.

The article's about a new, worldwide release of the 1940s film, Nuremberg: Its Lesson for Today, and how studies of the Holocaust in the last few years "is instructing a new generation on the horrific outcomes that result when laws and legal systems become untethered from basic moral forces."

In 2006, Polk was among 12 Yavapai officials who traveled to the Holocaust Museum in Washington DC and learned about a museum program that trained police how not to act like Nazis. Polk liked the concept so much that she asked the museum to design a similar program for her prosecutors.

A presentation was held for her deputy county attorneys in 2007, and museum historian William Meinecke Jr. took the show to other cities starting in 2008. According to the article:

Meinecke has traveled the country presenting his interactive program, called "Law, Justice and the Holocaust: How the Courts Failed Germany." With a Socratic dialogue provoking thought but not providing solutions, it shows lawyers and judges how easily their shortcuts, choices and decisions could lead to the same slippery slope that facilitated Nazi aggression and the systematic genocide of European Jews they referred to as "the Final Solution." 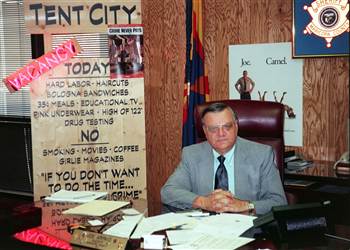 While Polk was taking pride in spreading the anti-thug message, she was asked to review criminal cases cooked up against Maricopa County leaders by Thomas and Arpaio. The article goes on to state:

In December 2009, Polk apparently had her own epiphany. She had been asked to take over the prosecution of members of nearby Maricopa County's board of supervisors--who were facing corruption charges after challenging the controversial policies of Sheriff Joe Arpaio and Maricopa County Attorney Andrew Thomas.

After investigating the allegations, she was taken aback by their disturbing lack of substance. After Thomas filed criminal charges against yet another county official--a judge who ruled against him--Polk wrote a letter published in the Arizona Republic:

"I can no longer sit by quietly and watch from a distance. ... I am conservative and passionately believe in limited government, not the totalitarianism that is spreading before my eyes."

Polk later testified under oath about her dealings with Thomas and Arpaio, noting that she was "shocked" when Arpaio's deputies arrested County Supervisor Don Stapley despite her argument to them that the case against him still needed work. We left a message for Polk this afternoon to see what she thought of the article, but she didn't call back.

The Journal article notes that both Thomas and Arpaio are under federal investigation for alleged abuse of power, and that Thomas faces a disciplinary hearing in July that could result in his disbarment.

Who was Mike Brown? Profile of Black Teenager Murdered in Missouri

North Carolina: Drug-Addict County Sheriff Who Threatened to Kill His Own Family Tasered to Death in Jail