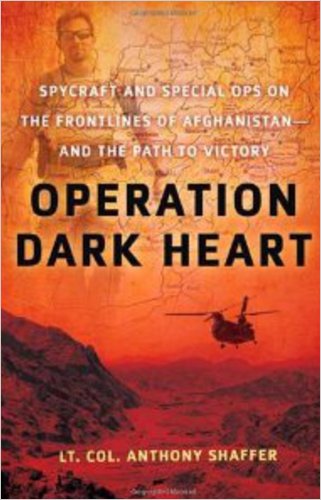 WASHINGTON — The National Security Agency, headquarters for the government’s eavesdroppers and code breakers, has been located at Fort Meade, Md., for half a century. Its nickname, the Fort, has been familiar for decades to neighbors and government workers alike.

Yet that nickname is one of hundreds of supposed secrets Pentagon reviewers blacked out in the new, censored edition of an intelligence officer’s Afghan war memoir. The Defense Department is buying and destroying the entire uncensored first printing of “Operation Dark Heart,” by Anthony Shaffer, a lieutenant colonel in the Army Reserve and former Defense Intelligence Agency officer, in the name of protecting national security.

Another supposed secret removed from the second printing: the location of the Central Intelligence Agency’s training facility — Camp Peary, Va., a fact discoverable from Wikipedia. And the name and abbreviation of the Iranian Revolutionary Guard Corps, routinely mentioned in news articles. And the fact that Sigint means “signals intelligence.”

Not only did the Pentagon black out Colonel Shaffer’s cover name in Afghanistan, Chris Stryker, it deleted the source of his pseudonym: the name of John Wayne’s character in the 1949 movie “The Sands of Iwo Jima.”

The redactions offer a rare glimpse behind the bureaucratic veil that cloaks information the government considers too important for public airing.

Several recent books by former spies and soldiers show the government’s editing with blacked-out passages, a gimmick that publishers use to give a book an insider’s feel. The reader can only guess at what is concealed.

But in the case of Colonel Shaffer’s book, uncensored advance copies — possibly as many as 100 — were distributed by St. Martin’s Press before military officials found what they thought were security lapses. The New York Times bought an uncensored copy online this month, and on Friday got the redacted version from the publisher.

The list of “key characters” in the initial printing is gone, as is the blurb on the original cover from a former Defense Intelligence Agency director, Lt. Gen. Patrick M. Hughes, who had called it “one terrific book.”

Black ink obscures Colonel Shaffer’s descriptions of intelligence operations in Afghanistan, including vague references to N.S.A. communications intercepts. One deleted passage, for instance, describes a plan by N.S.A. technicians to retrofit an ordinary-looking household electronic device and place it in an apartment near a suspected militant hideout in Pakistan. “The collection device would function like a sponge, soaking up any low-level signals too faint to be detected by N.S.A.’s more-distant devices,” Colonel Shaffer wrote.

The Pentagon’s intervention has greatly increased interest in the book: one uncensored copy sold for more than $2,000 this week on eBay, and when the story broke last week, preorders for the new edition pushed the book as high as No. 4 among best sellers on Amazon. ...

“While I do not agree with the edits in many ways,” Colonel Shaffer wrote, “the Defense Department redactions enhance the reader’s understanding by drawing attention to the flawed results created by a disorganized and heavy handed military intelligence bureaucracy.” ... CONTINUED