J.T. Ready, the Early Years, Courtesy of His Hometown Newspaper

I knew Gilbert massacre shooter J.T. Ready was from Polk County, Florida, and I had contacted some relatives of his over the weekend seeking comment. (No luck, alas.) But until today, I could find no mention of him in his hometown newspaper, The Ledger, located in Lakeland, Florida.

Thankfully, Ledger reporter Elvia Malagon fills in some of the blanks. Seems Ready had a bad attitude as a young man as well. Here's an excerpt from Malagon's piece:

Cobb, 36, of Lakeland, said he knew Ready from ROTC and hung out with him a few times. He remembers Ready being interested in the military.

Cobb said he saw how enraged Ready became at the Lakeland students the night of the party.

"He was dead-set ready," he said. "Beat them up, basically."

Cobb said he broke ties with Ready after that night and was shocked to hear about last week's shootings.

Lyn Stevens, 50, still lives next door to the home Ready grew up in Lakeland.

Stevens said she didn't know Ready well, but knew he showed an early interest in guns and the military.

"He was strange," she said. "Jason was into guns really heavily."

Stevens said Ready joined the Marines but was later discharged.

You can read Malagon's story in full at theledger.com.

The 39 year-old anti-Semite once told me with a straight face that his mother was Jewish, though I always figured he was full of it.

Malagon didn't score an interview with Ready's mom, so I guess a debunking of this improbable piece of Ready lore will have to wait. 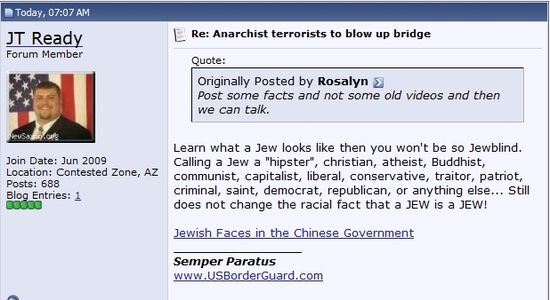 Neo-Nazi J.T. Ready could be quite lucid and genial. Sometimes, he came off as an autodidact, widely read if not highly educated. That impression would last only so long, however. Inevitably, he would make some anti-Semitic or racist comment, or go off on some related tangent involving eugenics or the supposed superiority of Caucasians.

You could tell he believed the insanity he was spouting.

The Anti-Defamation League, which dogged Ready for years, has released what it says are some of Ready's last online comments both to the white supremacist message board Stormfront.org and Youtube. 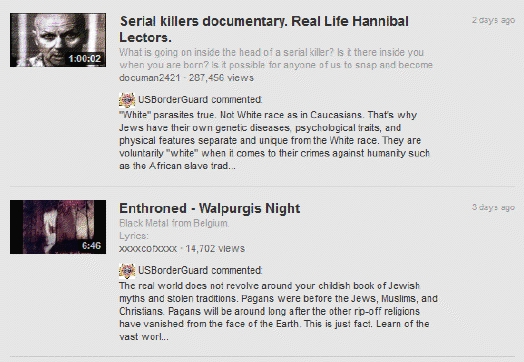 ADL's blog reports that Stormfront erased Ready's account from its site not long after the Gilbert massacre in which Ready killed himself and four others, including a baby girl. But the ADL was able to retrieve Ready's messages, either through Google cache or through the responses other posters made to his racist blatherings.

The ADL's blog discusses these posts in detail. Here is an excerpt:

Early in the morning of Wednesday, May 2, the day of the massacre, Ready posted a steady stream of messages to the video hosting site YouTube as well as to the white supremacist message forum Stormfront.

"These messages from Ready drip with heavy-handed racism and anti-Semitism. `Hitler was right,' Ready responded (posting under his screen name of USBorderGuard) on YouTube to a comment from a British user. `And if you are too stupid to see that then you deserve to get pushed off your island into the sea by a bunch of foreigners. Jews like Jack Straw have sold you down the river[,] mate.'"

"In another post, he opined, `Too bad traitors from within are selling the UK down the drain and letting Pakis in at home to destroy the British race once and for good. I hope the soldiers revolt and take back their island from the scum.'"

"In response to a video of journalist Mike Wallace interviewing Morgan Freeman about Black History Month, Ready asserted that `Jews are not White. They hate White people. [T]hey genocide Whites from the planet.' He also repeated this opinion in another post in response to a different video: `The Jew parasites want to genocide Whites from the planet in order to enslave the rest of the races. All races should unite against this evil.' 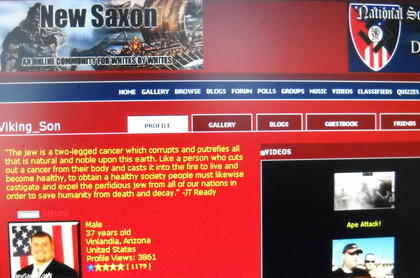 Ready was nothing if not consistent, as is evidenced by an old screenshot I saved from his account with the neo-Nazi social media site Newsaxon.org, "an online community for whites by whites."

If you had any illusions about Ready's political beliefs, this will cure you of them:

"The jew is a two-legged cancer which corrupts and putrefies all that is natural and noble upon this earth. Like a person who cuts out a cancer from their body and casts it into the fire to live and become healthy, to obtain a healthy society people must likewise castigate and expel the perfidious jew from all our nations in order to save humanity from death and decay."

And this guy was running around with grenade launchers and the grenades to go with them?

Sadly, law enforcement failed us when it came to J.T. Ready. I think the tendency by some is to write people like Ready off as clowns. But as John Wayne Gacy proved, even clowns can be deadly.

As heinous as the Gilbert slayings were, I shudder to think how many he could have killed if so inclined.

Now We’ve got Nazis Running Around the Desert

J.T. Ready’s Neo-Nazi Patrol for Migrants in the Vekol Valley

Nazis Patrol the Border … What Could Go Wrong?