Nazis in Olympia: A Chronology - The Constantine Report
0 SHARES

Nazis In America » Nazis in Olympia: A Chronology 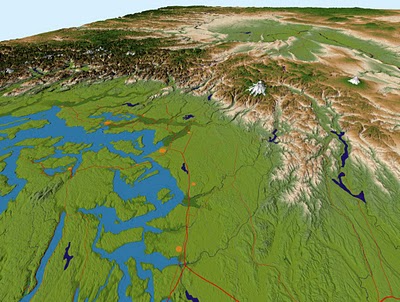 Names, email addresses and meeting times and locations have been removed from many of the items below. Some links lead to disturbing material published online by the National Socialist Movement.

At the state Capitol today, 12-13 Nazis were confronted by 275 police officers and more than 500 opponents in a counter-rally organized by OMJP. A report. 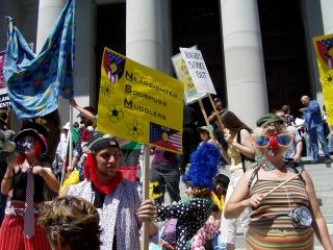 "...group member Shawn Stuart claimed the group could have brought many more than 14. 'This is all our headquarters will allow us to have,' he said." Spokes-Rev slide show.

Several hundred people (and a few Nazis) attended Unity in the Community's festival at Sylvester Park.

Neo-Nazi leader hopes to be heard by Venice Buhain, The Olympian, 19 June 06.

Groups mobilize against neo-Nazis by Venice Buhain, The Olympian, 19 June 06.

Jim Ramm's highly informative version (audio file) of the April 02 rally at the Capitol, in which he records sound from the rally and discussions with the State Police and his fellow nazis. 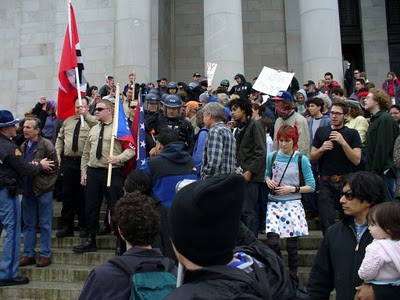 The Austin American-Statesman falsely reports that "Altercations broke out between protesters and National Socialist Movement members at a neo-Nazi rally that took place on the steps of the Capitol in Olympia."

Neo-Nazi Members Outnumbered By Counter-Protestors At Capitol by KIRO TV. Identical story published in the Seattle PI and broadcast via KOMO news.

Once again, nazis were forced out of Olympia. Seven nazis were confronted by 100-150 anti-racism activists at the Capitol. (The nazi's lied again, first saying they would rally in Sylvester Park and then claiming they had cancelled the event.). A concurrent event by Olympia Unity in the Community at Heritage Park was also a success (speech by Pete Bohmer). Photos: at Capitol steps 1 2 3 4 5 6 7 8 9 10 11 12; police escort nazis to State Police van (driven by an African-American police officer) 13 14 15 16 17; activists await nazis at nazi van 18 19 20 and decorate windshield 21 with flowers and notes; police transfer nazis from State Police van to nazi vehicle 22 23 24 25 26; some final messages 27 28. Additional photos from the community: police dislodge nazis from Capitol steps 29; Oly community escorts nazis as they withdraw 30; State Police 31.

Larry Mosqueda is targeted by nazi Bill White, administrator of the web site Overthrow.com, described by the Southern Poverty Law Center as the second most popular racist site on the Internet after Stormfront. Bill White's troubled history extends from his roots as a middle high school anarchist through some 22 arrests for assault, weapons, explosives, property destruction, graffiti and use of false identification, to spokesman for the National Socialist Movement and leader of its Roanoke, Virginia chapter.

Rallies planned to offset neo-Nazis by Diane Huber, The Olympian.

Flyers are prepared and distributed, the media is notified, and radio stations announce two coordinated events scheduled for Sunday April 02 to counter nazi presence. One group will meet in Sylvester Park at 11am with the intention of directly confronting the nazis. The other group will offer a pro-diversity, anti-hate message at Heritage Park at noon.

A local family schedules a meeting to plan a community response to anticipated nazi presence in Olympia.

The NSM posts on its web site its intention to rally in Olympia on Sunday April 02. It subsequently posts "NSM Olympia RALLY GOYIM UNITE! Is cancelled for April 2. We will return to Olympia on April 20th: Hitler's Birthday." Local activists have reason to suspect the cancellation is a ruse.

NSM steps up attacks on Olympians, singling out long-time peace and social justice activist and educator Pete Bohmer as well as OMJP, Media Island and Free Radio Olympia. The NSM published online the photographs of, and email, home and work addresses and phone numbers of targeted individuals, and the times and locations of organizational meetings.

Olympia Unity in the Community lauched its web site.

The Diveristy Poster Campaign and Education subcommittees of Olympia Unity in the Community met.

Hatred has no place here, Editorial, The Olympian.

Racist messages dumped on lawns by Jennifer Latson, The Olympian.

An organizing meeting was held in Olympia and attended by 70 concerned citizens, clergy, and representatives from community organizations, the Olympia Police Department and the Thurston County Prosecuting Attorney's Office.

King5 Seattle reports the distribution of easter eggs filled with hate and pornographic messages throughout Lacey, Tumwater and Olympia. Photo

Two Olympians wrote to web site owner Jim Ramm (aka Matthew Ramsey) at mindfelon@yahoo.com, cc'd to the Seattle FBI at fbise@leo.gov and requested to be added to his list of enemies.

Free Radio Olympia and Oly Unity report that Nazi's have called upon all white supremacists to converge on Olympia July 2-4 for a rally at the Capitol.

Who Are Those Neo-Nazis? by KLM. All about Jim Ramm (Matthew Ramsey) and Justin Boyer.

"Woman who sheltered Jews in WWII dies," by Barry Ginter, The Olympian.

"Olympia does not welcome Nazis for long weekend," by AS. Community meeting scheduled.

"Neo-Nazi group has date at Capitol," by Adam Wilson, The Olympian.

Correction: Nazi permit for Monday, 03 July, 2-4 pm on the State Capitol Steps, by AS

Activist meeting scheduled for Feb 03 at a local restaurant, per S

Why Nazis Can Not Be Ignored: 1992 Murder of Bob Buchanan, by LM

A summary of the Anti-racist, anti-Nazi protest by Pete Bohmer

Proud of Olympia: Why Hate Groups Should Not Be Ignored by ZG

Olympia grandmother from Dachau to march

The Olympian reports that Nazis will rally in Olympia tomorrow.

OMJP notifies community, schedules counter-rally in coalition with others.

another world is possible . . .