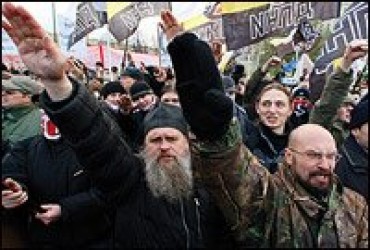 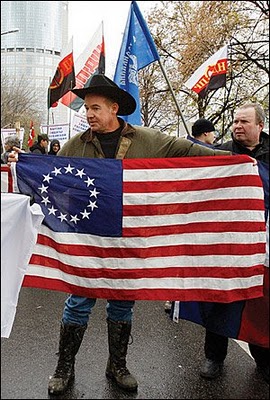 He lives part of the year in a Moscow apartment that he sublets from former Klan boss David Duke. His best friends are Russian skinheads. He boasts of pumping $50,000 a year of his own money into the white nationalist movement. He's tight with the leader of the racist British National Party as well as ultra-right politicians and white supremacist academics in Russia, his adopted homeland.

His name is Preston Wiginton, and his newfound purpose in life is forging international connections between anti-immigration extremists and white supremacists to prevent the populations of "white nations" from becoming what he has termed "a homogenous muddle of sludge." A 43-year-old native Texan and former owner of a shipping pallet manufacturing company, Wiginton declined to comment for this article when contacted by E-mail, calling himself "the wrong Goy" to ask for information. "You [the Southern Poverty Law Center] have a political objective to destroy European and Slavic peoples and cultures," Wiginton wrote. "We can exist only if we live in the yoke of your Judaic system."

Wiginton first appeared on the white nationalist scene in October 2005, not long after he turned 40, when he attended Hammerfest, a neo-Nazi skinhead festival in Draketown, Ga. It's unclear from his prolific subsequent blog posts and essays whether he subscribed to white nationalist ideology relatively late in life or was a longtime believer who came out publicly in middle age. Either way, it's certain that in less than two years Wiginton became a major behind-the-scenes player in the white nationalist movement and the most dynamic American far-right extremist making waves abroad other than Duke, who Wiginton calls a good friend and claims to speak with twice a week.

The accelerating trajectory of Wiginton's activism began in the fall of 2005, one month after Hammerfest, when he organized a lecture at Texas A&M University by anti-immigration extremist Frosty Wooldridge. When about 100 anti-racist protesters surrounded Wiginton and Wooldridge in a "free speech zone," Wiginton threatened to "bring in the Hammerskins," apparently a reference to members of Hammerskin Nation, a nationwide coalition of violent skinhead gangs.

Wooldridge's appearance at Texas A&M was originally sponsored by the university's chapter of Young Conservatives of Texas. But that group backed away from the event after its chairman revealed that Wiginton had duped him by falsely claiming to be organizing the lecture on behalf of the organization's state officers.

Wooldridge's Texas A&M appearance occurred in the midst of an uproar on campus over a video posted to YouTube that showed a white student in blackface being whipped by his "slavemaster." In the aftermath of that brouhaha, Wiginton publicly challenged Tito Guerrero III, Texas A&M's vice president and associate provost for diversity, to debate Jared Taylor, editor of the white supremacist magazine American Renaissance.

According to campus media accounts, Wiginton attended a campus diversity symposium holding a 2-by-4 foot sign that read, "Why Won't Tito Guerrero Debate Jared Taylor?" When a professor during a panel discussion described widespread institutional racism in America, Wiginton interrupted from the audience. "Sir, you're lying and I'm having a hard time listening to this," he said. "I hate to see young minds get lied to."

Wiginton's next public move was the NoAztlan aerial banner campaign. By his own account, he paid $5,500 for a gigantic banner that bore the message, "USA LOVE IT OR LEAVE IT," a crossed-out Mexican flag and the Internet address of Wiginton's conspiracy theory website NoAztlan.Com (a reference to an alleged secret plan by Mexico to reconquer the southwestern United States, part of what some Mexican revanchists refer to as "Aztlan"). The banner made its debut the morning of April 10, 2006, when a Cessna 188 took off from a regional airport in Ellis County, Texas, with the NoAztlan banner in tow. For 90 minutes, the plane circled above Dallas. Then its engine failed, and the pilot was forced to make an emergency landing in a weedy field near a residential neighborhood. No one was injured.

Twelve days after this inglorious beginning, the banner was flown over a NASCAR race in Phoenix, Ariz., that was attended by more than 40,000 people. The website it promoted contains an essay by Wiginton that describes non-white immigration as "an abnormal growth that is threatening the life of American culture and the life of American people."

Preston Wiginton has worked to build alliances with key figures on the Russian radical right, including Alexander Belov, former spokesman for the virulently anti-Semitic group Pamyat.

"If action is taken, and time is of the essence, this cancer can be eradicated," Wiginton writes. If not, "the death of the American way of life, identity and sovereignty is certain."

The language in Wiginton's NoAztlan essay is about as harsh as his rhetoric gets if it's intended for a general audience. When he interacts with college students, talks with American media or posts to mainstream conservative blogs, he typically assumes the guise of a Minuteman-style nativist concerned chiefly with illegal immigration. He strategically limits his Jew-bashing and endorsements of racially motivated violence to his personal website and a handful of white supremacist online forums including Stormfront, which he joined in October 2006 using the screen name "Ruskybound."

According to his own posts, Wiginton moved to Moscow shortly thereafter and began forging connections with racist "skinheads, leaders of Russian nationalist parties, Russian skinhead and patriot bands and Russian WN [white nationalist] academics." He has since repeatedly boasted on Stormfront of his close relationship with Alexander Belov, the former spokesman for the Russian ultranationalist and virulently anti-Semitic group Pamyat. Currently, Belov is the leader of Movement Against Illegal Immigration, or DPNI, a powerful white nationalist organization with 5,000 members in 30 regions of Russia. DPNI has close ties to neo-Nazi Russian skinhead gangs, whose members carried out more than 600 xenophobic attacks last year, including 68 murders, according to the Sova Information and Analyis Center, a Moscow-based watchdog organization.

In the last two years, Preston Wiginton has become the most dynamic American far-right extremist making waves abroad other than David Duke, who Wiginton calls a good friend and claims to speak with twice a week.

"Russia is under third world invasion. Luckily Russia is the only nation that understands RAHOWA [Racial Holy War]," Wiginton wrote in a Stormfront post last July. "Because of this immigrants think twice about coming to Russia."

Wiginton returned to America in the spring of 2007 to ramp up his activism here by organizing a series of lectures on college campuses by racist leaders, starting with a lecture at Clemson University last April that was co-sponsored by the South Carolina chapter of the Council of Conservative Citizens (CCC), a white supremacist organization.

Last summer, Wiginton was back in Russia for the annual DPNI congress, which was attended by skinheads and other white nationalists from at least five European countries. "There were many Seig Heils and Roman Salutes," Wiginton wrote on Stormfront. Also in the summer of 2007, Wiginton promoted a series of concerts in Russia by the Bully Boys, an American hate rock band. In his spare time, he tried to find a Russian girlfriend. "Real Russian women, not half-breeds or Jews, want real Russian men," he wrote on his website. "I know I have been turned down a few times, but also I was lucky in knowing many people over here when I came."

Wiginton reappeared in America last October when he co-sponsored another lecture at Clemson with the CCC, this one by Nick Griffin, the Holocaust-denying chairman of British National Party (BNP). The following day, Griffin lectured at Texas A&M at the invitation of the so-called Aggie Independents.

Griffin then flew to East Lansing, Mich., for an Oct. 26 lecture at Michigan State University that was sponsored by the MSU chapter of Young Americans for Freedom. Griffin later described Wiginton on the BNP website as the "host and organizer of the whole tour."

The week after Griffin's lectures, Wiginton was back in Moscow, where he spoke at a rally against non-white immigration last Nov. 4 that was attended by approximately 5,000 Russian ultra-nationalists, including a large contingent of skinheads. Lifting his black cowboy hat into the air, Wiginton said, "I'm taking my hat off as a sign of respect for your strong identity in ethnicity, nation and race." The skinheads raised their arms in Nazi salutes and chanted "White Power!" in English.

It was the first time Wiginton stepped from the shadows into the spotlight. It's unlikely to be the last.