" ... The 43 Group was formed by Jewish ex-servicemen in the wake of World War II who returned home to the UK to see Nazis in Sir Oswald Mosley's British Union of Fascists (BUF) organising openly, and resolved to continue their fight against fascism. The organisation fought pitched battles, often armed with knives and razor blades, with the BUF and eventually smashed them off London's streets. Sassoon's weapon of choice? Fittingly, a pair of scissors. ... "

Channel 4 News reporter Katie Razzall speaks to a childhood friend of the late hairdresser Vidal Sassoon who reveals he and Sassoon took up the fight against fascist oppression. 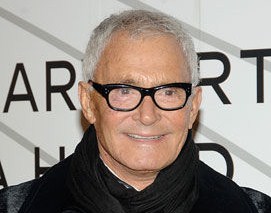 We all know about Vidal Sassoon the hairdresser, the first person to put his name to hair products, the man who revolutionised hair styling in the sixties.

The iconic stylist died of leukaemia on Wednesday at his Los Angeles home at the age of 84.

Born to Jewish parents in west London in 1928, his father left when he was five, and his mother had to put him and his brother into a Jewish orphanage because she could not afford to keep them.

But Channel 4 News has heard about another side of Vidal Sassoon.

I went to meet Jules Konopinski. He grew up with Vidal Sassoon in London's East End.

This was a time when fascist leader Oswald Mosley and his blackshirts were on the streets making life difficult for British Jews.

This pair - and others - decided to fight back. They joined the 43 Group, an organisation of Jews who fought fascism.

As Mr Konopinski told me: "Vidal was a fit boy, he knew how to fight." This pair used their fists to break up fascist meetings. They were met, Mr Konopinski says, by iron bars, belt buckles and coshes.

As Vidal Sassoon's career fortunes rose, he had to be careful of his hands - "they were his livelihood" says Mr Konopinski.

But he never stopped fighting extremism, says his childhood friend, wherever he found it.

... The 43 Group was formed by Jewish ex-servicemen in the wake of World War II who returned home to the UK to see Nazis in Sir Oswald Mosley's British Union of Fascists (BUF) organising openly, and resolved to continue their fight against fascism.

The organisation fought pitched battles, often armed with knives and razor blades, with the BUF and eventually smashed them off London's streets. Sassoon's weapon of choice? Fittingly, a pair of scissors.

In an interview with the Iranian Jewish Chronicle he recounted his involvement in the group:

It was a rather strange situation because the war was over. Before the war there was quite a strong fascist party led by Oswald Mosley and he and his cohorts were put in detention (jail) during the war by Churchill. After the war they came out and immediately started up again with their anti-Semitism and running through the streets and having meetings, it was quite ridiculous. Many truly brave Jewish ex-servicemen started the “43 Group” because there were 43 people at the first meeting they had. These were tough men who had been through the war. Of course volunteers were needed, I was 16 or 17 at the time, most of my friends joined the 43 Group and there were quite a few hundred of us. Truly the fascists were smashed in the streets and yes if you were scared at times because it was scary. But after we saw the pictures that came out and the whole story of the Holocaust, there was actually no way we could allow fascists to run through the streets. I was arrested one night and put in jail, the following day the judge told me ‘to be a good boy’ and let me go. That was our life in those days, we decided that we were absolutely not going to allow what happened pre-war when Jews were just beat up indiscriminately in the streets. It worked beautifully because of mainly the tough Jewish characters that were in the British armed forces during the war, they were the people that did it. But also there were quite a few gentiles who had seen the camps, the horror of Europe and fought with us.

In a recent BBC documentary he told how he once turned up to work with a black eye after a night of fighting.

"I'll never forget one morning I walked in and I had a hell of a bruise - it had been a difficult night the night before - and a client said to me, 'Good God, Vidal, what happened to your face?' And I said, 'Oh, nothing, madam, I just fell over a hairpin'." ...

[…] Vidal Sassoon’s Fight Against Fascism By pau1ie on May 16th, 2012 Posted in Style 0 http://www.antifascistencyclopedia.com […]

PHOTO: Posters Of Romney Portrayed As Adolf Hitler Being Plastered Around Los Angeles - Page 3 - Stormfront May 14, 2012
| |

[…] Maybe Vidal Sassoon could have saved the day and fought these evil fascists: Vidal Sassoon’s Fight Against Fascism People's imagination sure runs wild, especially after someone's death – to create the […]

10 Points of Fascist Policy: Manifesto of the British Union of Fascists, by Oswald Mosley

UK: BNP's Griffin under fire: 'Send him to the South Pole. It's colourless there'

Thousands of BNP Members Named in Document Posted on Internet

UK: Nazi Collaborator a Reminder that Not All Fascists are BNP or Skinhead Loons

UK: For Sale, the Deadly Three Lions Badge of the British SS