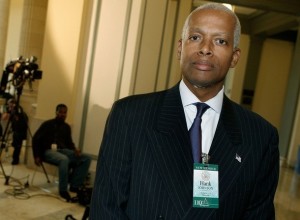 Johnson also called for an investigation into reprisals against the USA TODAY journalists who have reported on the program, whom he said were “targeted in a possibly criminal disinformation and reputation attack.”

Within days of beginning work on the story, USA TODAY reporter Tom Vanden Brook had a bogus website, Facebook profile and Twitter feeds created in his name. The sites disappeared once the Pentagon made informal inquiries. Still, Johnson said, “it raises the deeply disturbing possibility that a federal defense contractor that specializes in information operations may have targeted American journalists.”

Johnson introduced an amendment to cut $122 million from info ops — and then immediately withdrew it, concerned that the program might be “supporting our men and women in harm’s way.” Spokesman Andy Phelan explained that the legislative tactic was intended to send “a very clear message that this program is under serious scrutiny.”

Johnson adds his name to other congressional interest. Rep. John Tierney, D-Mass., has asked for an inspector general’s investigation. Sens. Tom Carper, D-Del., and Tom Coburn, R-Okla., want the Pentagon to withhold payments to contractors, like Leonie, whose owners have had tax liens.

Defense spokesman Lt. Col. James Gregory said the Pentagon had no active investigations into propaganda operations. “The Defense Department continues to be transparent and responsive in our efforts to ensure Congress has the information they need to provide oversight of the department’s Information Operations activities,” he said in a statement.

L. Lin Wood, an Atlanta lawyer who represents Leonie’s brother-and-sister owners, said he had not spoken to his clients and did not have an immediate comment. The company previously issued a statement saying it condemns the campaign to target USA TODAY reporters.