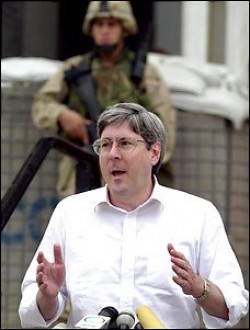 Mistakes were made. But not by him.

Doug Feith, the No. 3 man at the Pentagon before, during and after the invasion of Iraq, has come in for his share of blame for the failures there — in large part because he led the Pentagon policy shop that badly misstated the case for war and bungled the planning for the aftermath. Gen. Tommy Franks called him “the dumbest [bad word] guy on the planet.” George Tenet of the CIA called his work on Iraq “total crap.” And Jay Garner, once the American administrator in Iraq, deduced that Feith is “incredibly dangerous” and, “He’s a smart guy whose electrons aren’t connected.”

Now Feith, whatever the state of his electrons, is showing just how dangerous he can be. He’s written a book designed to settle the score with his many opponents in the administration, and in a book-launch event last night at the Center for Strategic and International Studies, he pointed his finger every which way but inward. …