Who is Stephen Payne? 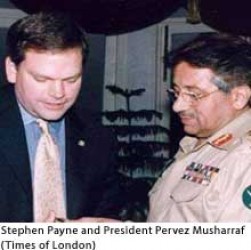 “… Payne is also a founder and managing partner of Envion Worldwide … Envion’s senior advisor is none other than Frank Carlucci, chairman emeritus of the Carlyle Group. … Another former member of Team Eagle and current member of Worldwide Strategic Partners is Brian Ettinger, a former legislative aide to Sen. Joe Biden. This is especially interesting because Biden’s name came up in the influence-peddling sting operation. …”

Stephen Payne continues to make Jack Abramoff look like a piker. You want a Republican super-lobbyist? I’ll show you a super-lobbyist …

As you may have heard, Republican fundraiser and lobbyist Stephen Payne was caught on tape offering meetings with Dick Cheney and Condi Rice in exchange for a hefty donation to the George W. Bush presidential library. …

Of course, the Bush administration and the library project are frantically trying to disassociate themselves from Payne.

My research confirms that Payne was about as plugged in as you can imagine. White House press secretary Dana Perino admitted that Payne has probably met with the president on a number of occasions, but she balked when reporters asked her about visitor logs that might establish how often, citing “lawsuits and stuff.”

If even half of what Stephen Payne says about himself is true, there is no question that he had acces to the highest levels of the Bush administration. Payne was a Bush Pioneer in 2000 and 2004. He was also a member of Bush Cheney 04, George W. Bush for President, and Tom DeLay’s Congressional Committee.

According to a cached copy of Payne’s curriculum vitae that I found on the Worldwide Strategic Partners website (now scrubbed), Payne claims to have been George W. Bush’s personal travel aide during his father’s 1988 Presidential campaign. Payne served as Senior Advisor to the NASA Administrator on White House and Congressional Affairs in 2001, according to the same document.

If the old Worldwide Strategic Partners website is to be believed, Payne has accompanied Bush and Cheney on offical trips, as well as served as an advance man for them: “Currently, Mr. Payne assists the White House as a Senior Advance Representative traveling internationally in advance of and with President Bush and Vice President Cheney, including trips with President Bush to Jordan for the Red Sea Summit (Mid-East Peace Summit), and with Vice President Cheney to the Mid-East, Korea, Kazakhstan, and to Afghanistan for the historic swearing-in of President Hamid Karzai.”

According to the same bio page and a WSP brochure obtained by the Sunday Times, Payne personally advised General Pervez Musharaff and helped secure billions of dollars in aid to Pakistan. I was able to confirm through public records that Payne was a registered lobbyist for the Islamic Republic of Pakistan and a member of a lobbying group called Team Eagle (formerly known as Team Barakat). 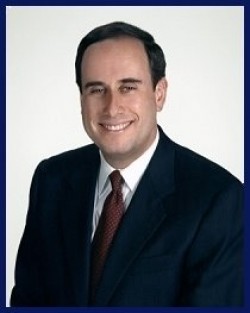 Republican heavyweights Gary Polland and Tim Powers served alongside Payne on Team Eagle. All three were registered foreign agents of the Islamic Republic of Pakistan.

Another former member of Team Eagle and current member of Worldwide Strategic Partners is Brian Ettinger, a former legislative aide to Sen. Joe Biden. This is especially interesting because Biden’s name came up in the influence-peddling sting operation.

When it comes to Republican bona fides, Polland’s website bio says it all:
“Gary is on a first name basis with President Bush (he is called ‘Chairman’), his political alliances are widespread from the White House, where he is friends with key Presidential assistants like Karl Rove to United States Senators Cornyn, Graham, Hutchison, and Kyl; and to House leaders like Eric Canter and Ted Poe. In Texas, Gary is an advisor to the GOP and its statewide office holders. Gary is also a key fundraiser for Republicans and is responsible for raising more than $3.35 million for Republican candidates and causes during the last ten years.”

Payne’s closest current ties to the executive branch appear to be through the Department of Homeland Security. According to the WSP brochure, Payne is a member of the Homeland Security Advisory Council, the Rice/Chertoff Commission on Visas, and Border Protection, and the Essential Technologies Task Force of DHS.

Another of Payne’s claims to fame is that he is one of Latvia’s Honorary General Consuls to the United States.

Payne is also a founder and managing partner of Envion Worldwide, a D.C.-based globally networked investment firm that “works to acquire and consolidate natural gas, petroleum, alternative energy, and other power generating assets.” Envion’s senior advisor is none other than Frank Carlucci, chairman emeritus of the Carlyle Group.

Payne is a strategic limited partner in MSH Ventures and where Carlucci is senior advisor. Payne is a co-founder of Alliance & Co., which appears to be led by most of the same people as Envion and MSH, including Carlucci.

Carlucci and Payne both serve on the board of the National Defense University. Payne is also the president of a firm called Advanced Clean Air Technologies, which allegedly holds an exclusive NASA patent to scrub emissions from coal plants.

These preliminary findings are only scratching the surface of Stephen Payne’s strange network of influence.