Liberty City 7: Trial and Trial again in an FBI Travesty 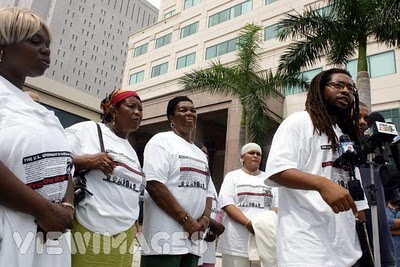 Give federal prosecutors their due for imaginative charges to go on top of their prosecution of imaginary plots. In their attempt to convict six Florida men of plotting to blow up the Sears Tower in Chicago and FBI offices across the country, prosecutors are charging that the men were planning to trigger a big anti-government insurrection. If that’s what the men were really up to, that alone should have tipped off prosecutors about the alleged plotters’ loose screws.

Two juries so far appear to have caught on. In December, the jury convened in the first trial of the men, then numbering seven and known as the Liberty City Seven (after the poor Miami neighborhood where they live), acquitted one of them and couldn’t decide what to do about the rest. Prosecutors convened a second trial and tried again. Same result: hung jury. The jury couldn’t agree on a single charge for a single defendant. Wednesday, prosecutors announced they’d try again with a third trial and a third jury. Security alone, so far, has cost more than $1 million. The cost of the trials is several times more that. Taxpayers are footing the bill of what looked like a travesty of justice almost from the beginning.

FBI informants posed in spring 2006 as al-Qaida operatives. They hooked up with poor Haitians in Miami’s Liberty City neighborhood, all of them in their 20s or early 30s, and began coaxing them — if not coaching them — into saying anti-American things. Their leader, Narseal Batiste, was a FedEx deliveryman who organized Bible readings and dabbles in other religious traditions in the back of a store. Federal agents somehow tagged him and his buddies “a radical Islamic group” intent on destroying the United States. One informant managed to get one of the seven to utter an oath to al-Qaida.

The defendants had no weaponry. The FBI discovered no plans, either, nor money or any means or knowledge to prepare for an attack. Some of the men under arrest may not even have known where Chicago is. All of which lends at least some credence to the defense’s claim that Batiste’s worst crime was to tell the FBI informants what they wanted to hear in an attempt to con them out of some money. The only justice in this case would be to end it.