THERE WILL BE BLOOD: Mariner Energy is Owned by the Texas Pacific Group & Carlyle, Fascist Fronts with Little Regard for the Environment & Worker Safety - The Constantine Report
0 SHARES

Corpwatch » THERE WILL BE BLOOD: Mariner Energy is Owned by the Texas Pacific Group & Carlyle, Fascist Fronts with Little Regard for the Environment & Worker Safety

THERE WILL BE BLOOD: Mariner Energy is Owned by the Texas Pacific Group & Carlyle, Fascist Fronts with Little Regard for the Environment & Worker Safety 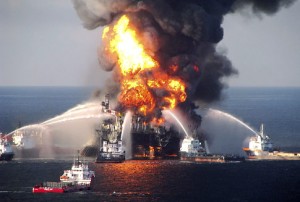 Yesterday morning, a gas rig operated in shallow water on the Continental Shelf by Mariner Energy exploded, sending 13 workers into the drink. The company is part-owned by the Texas Pacific Group.  Carlyle/Riverstone also owns a piece of Mariner. (Riverstone is a private equity firm that operates primarily in joint venture with Carlyle. Wikipedia: "Riverstone was founded by Pierre F. Lapeyre, Jr. and David M. Leuschen, who had been instrumental in the formation of the Goldman Sachs Global Energy & Power Group in the mid 1980s.") Former Enron execs haunt the boardroom. I'm not suggesting in any way that the inferno in the Gulf was a conspiracy of some kind, but when these stinkbugs run a company, worker safety & environmental caution are the least of their concerns. Fascist management always looks for cost-cutting in areas not strictly related to revenue, and accidents like the rig explosion are therefore likely to occur. Ethical lapses in the boardroom have serious consequences in the workplace but the corruption ultimately affects all of our lives. Given the corporations and political shilling involved, it would be inconsistent if rigs weren't blowing up and poisoning the local sealife. A revealing perspective on Carlyle's complete disregard for life and the environment  is posted here. A share of responsibility for both the BP and Mariner disasters rests with the immensely-corrupt Bush administration and poor federal oversight of BigOil. Enron is the previous owner of Mariner and is heavily represented in its boardroom. In 2002, the Guardian reported on the Bush adminsitration's emerging energy policy: " ... A thumbnail sketch of politics and the environment in the United States today depicts oil as the lifeblood running through every vein of an administration forging ahead with its energy policy. The White House has just been forced to disclose (after being faced with a Congressional subpoena) that it drew up a national energy plan based on increased production without regard to the environment or conservation, having failed to consult with anyone other than its friends among the producers themselves, notably the disgraced Enron." Mariner is a bastard son of Enron. The first posting below explains ownership of Mariner Energy, and the second traces some of the Texas Pacific Group's numerous fascist ties. (Carlyle is infamous enough, but if the names Bass Group, Colony Capital, World Wildlife Fund, William Rogers, Gemalto, etc. are not clear to the reader, it is well-worth researching the deep histories of these corrupt, CIA-linked commercial and political pariahs). From "New Oil Rig Explosion Raises More Questions," at the Opposing Views website, September 2, 2010:

" ... Here’s what we know about Mariner Energy: In January 2004, the private equity funds Carlyle/Riverstone and Texas Pacific Group purchased Mariner Energy from Enron for $271 million and took the company public in March 2005.

Carlyle/Riverstone then exited as an investor, but Texas Pacific Group, through its ACON Investments subsidiary, still has significant interests, with ACON’s Bernard Aronson and Jonathan Ginns both serving on Mariner’s board.

Mariner’s Enron legacy continues, as the company’s Chairman, CEO and President is Scott D. Josey, who served as VP of Enron North America from 2000-02. At the time, Enron was engaged in one of the biggest corporate rip-offs in history, stealing billions of dollars from West Coast energy consumers. Jesus G. Melendrez is Mariner’s CFO and he served as a VP with Enron North America from 2000-03. Mariner’s General Counsel, Teresa G. Bushman, worked as a lawyer with Enron from 1996-2003.

Public Citizen revealed that Mariner Energy has escaped paying more than $44 million in royalties because it has legally been producing oil and gas from Gulf of Mexico leases royalty-free. On Aug. 11, 2007, the federal government fined Mariner Energy $30,000 after an employee “fell 11 feet.”

The founder of the Texas Pacific Group is David Bonderman, a director of the World Wildlife Fund - a fairly well-known intelligence front. RE BONDERMAN, NAZI CONNECTONS & CIA - From a prior post of mine:

.. Bonderman was co-founder of the Halifax Group, formed in January 1999 with David W. Dupree, a former director at The Carlyle Group, William L. Rogers, founding partner of Colony and the Robert M. Bass Group, also Thomas J. Barrack, chief executive of Colony Capital and a former principal at Robert M. Bass. .... Bonderman went to TPG in 1992 direct from the position of chief operating officer at the Bass Group, Inc., then based in Fort Worth, Texas. ...

Bonderman serves on the board of Gemplus International S.A.6 And this is where the Texas Pacific Group shows its true colors as a Nazi/CIA appendage. ...

In January 26th, 2000, Gemplus announced the signing of a financial agreement with the Texas Pacific Group. The latter agreed to pour $300-$500 million in equity into Gemplus: "Texas Pacific Group will join founder and chairman Marc Lassus, Gemplus employees and members of the QUANDT Family of Germany, as one of the major shareholders of Gemplus. Terms of the transaction were not disclosed. Gemplus will use the new capital to dramatically expand Gemplus' presence in the wireless communications, e-commerce, and Internet security markets."

The partnership was billed as one of the largest private equity investments in technology history. But there was no call for champagne at the next stockholder's meeting. The Quandts have well-deserved reputation for Nazi collaboration, as Jeffrey Myers, Department of History, Avila University, reports:

"With the rise of Hitler, the Quandts became enmeshed in the Nazi horror. The marriage of Gunther Quandt's ex-wife Magda to Joseph Goebbels initially linked the Quandt family to the Nazis, but Guenther Quandt and his sons all played significant independent roles in the Third Reich. Each eventually became a member of the Nazi party, and, more importantly, the Quandt firms of AFA and DWM (as well as the heavily Quandt-invested Daimler-Benz) utilized slave labor from the concentration camps of Hannover-Stcken, Mauthausen, and Sachsenhausen. In the immediate post-war period, the Quandts were subject to close scrutiny and heavy fines as a result of denazification. The family also faced the loss of factories due to wartime destruction and confiscation of properties in the Soviet zone. The Quandts' version of the Economic Miracle occurred largely thanks to the rearmament of West Germany in the mid-1950s, which made DWM and AFA profitable once again." http://alexconstantine.blogspot.com/2006/11/lexington-comair-crash-part-11-gps.html

With big brothers like this in the BigOil fraternity, there will always be blood at Mariner.

The Silence of the Quandts: The History of a Wealthy German Family (Film Review)