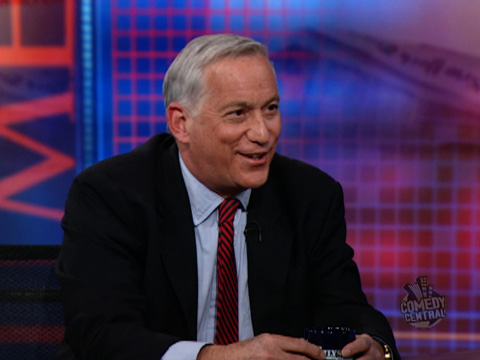 Walter Isaacson is the president of the Aspen Institute and has been the chairman and CEO of CNN and managing editor of Time Magazine. He also authored Kissinger: A Biography." Books

As  the chairman of the Broadcasting Board of Governors (BBG), Walter Isaacson oversees Radio Free Europe, Voice of America, Radio Free Asia, Radio/TV Marti, Radio Sawa, and Alhurra TV," all on close terms with the CIA.

Isaacson's appointment to the BBG:

"November 18, 2009 - One of the worst managed U.S. federal agencies will have a new leadership. President Obama has announced his intention to nominate former CNN chairman and CEO Walter Isaacson, a Democrat, to chair the Broadcasting Board of Governors, BBG, an independent federal agency in charge of all U.S. civilian international news broadcasting. President Obama also intends to nominate seven other new members of the bipartisan board, including Dana Perino, the former White House Press Secretary to President George W. Bush, and former U.S. Ambassador to Poland Victor H. Ashe. They would be among four new Republican members of the BBG. ... "

" ... The propagandistic nature of the war coverage was made crystal clear by AOL Time Warner’s CNN a few weeks after the war began in Afghanistan. CNN president Walter Isaacson authorized CNN to provide two different versions of the war: a more critical one for the global audience and a sugarcoated one for Americans. Isaacson instructed the domestic CNN to be certain that any story that might undermine support for the US war be balanced with a reminder that the war on terrorism is a response to the heinous attacks of September 11. ... "

From "Robert Fisk: Hypocrisy, hatred and the war on terror"

" ... Infinitely more shameful – and unethical – were the disgraceful words of Walter Isaacson, the chairman of CNN, to his staff. Showing the misery of Afghanistan ran the risk of promoting enemy propaganda, he said. 'It seems perverse to focus too much on the casualties or hardship in Afghanistan ... we must talk about how the Taliban are using civilian shields and how the Taliban have harboured the terrorists responsible for killing close up to 5,000 innocent people.' ...  "

Why did Isaacson toe the Bush administration's "progaganda" line on Afghanistan? Explanation from "The media and the patriotism police"

" ...Walter Isaacson is pushed hard by Moyers and finally admits, 'We didn't question our sources enough.' But why? Isaacson notes there was "almost a patriotism police" after 9/11 and when the network showed civilian casualties it would get phone calls from advertisers and the administration and "big people in corporations were calling up and saying, 'You're being anti-American here.'  ... "

Is this journalism, or is this cheerleading?

Excerpt: ... [Thursday] morning Flag War broke out among the cable news networks. CNN declared itself the victor, having put its animated American flag near the bottom of the screen at midnight Wednesday; MSNBC and Fox News Channel followed suit yesterday morning.

"I'm thrilled we were the first network to put up the American flag," said Garth Ancier, vice president of programming at Turner Broadcasting Systems, which includes CNN.

"We all started hearing about friends and neighbors who were buying flags. Walter Isaacson said he didn't want anyone getting an American flag on before us; he ordered the animated American flag [Wednesday] night."

The Far-Right Politics of the BBG, from "Cleaning house at the BBG; former CNN CEO to manage U.S. international news programs" -- and follow the "Holocaust deniers" link for KKK propaganda in the Middle East, gratis the American taxpayer:

"... The agency with the estimated $717.4 million budget in FY 2009 and nearly 3,800 employees has been consistently rated by the U.S. Office of Personnel Management, OPM, in employee surveys as one of the worst managed within the federal government. Some of the current BBG members and their executive staff tried to withhold from the U.S. Congress and journalists independent taxpayer-funded studies revealing cases of serious mismanagement at the BBG and its privatized broadcasting entities, especially Radio Sawa and Alhurra Television. One of the studies described substandard journalistic practices at Alhurra, including broadcasting statements from Holocaust deniers, and its failure to attract a meaningful audience in the Middle East.

"To pay private media contractors favored by the Bush Administration, the BBG eliminated all Voice of America Arabic news programs and cut broadcasts to many other countries without free media. VOA Russian-language radio broadcasts were terminiated in July 2008, just 12 days before the Russian military attack on Georgia.

"Both Republicans and Democrats appointed to the BBG by President Bush approved these controversial decisions. The effort to create contractor-managed broadcasting to the Muslim world, as opposed to broadcasting by the Voice of America, which operates under a Congressional charter as a U.S. government entity with guarantees of journalistic independence, was led by former Democratic BBG members: Norman Pattiz and Edward E. Kaufman who is now a U.S. senator from Delaware. Their alliance with neoconservatives in the Bush administration was essential for carrying out plans to privatize U.S. international broadcasting. Only one current BBG member, conservative radio host Blanquita Walsh Cullum, was reported to have opposed some of the questionable management practices at the BBG, particularly the push to eliminate Voice of America broadcasts to countries without independent media. ... "

Walter Isaacson: America's Voice Must Be Credible And Must Be Heard

(Washington, DC) Broadcasting Board of Governors (BBG) Chairman Walter Isaacson tonight announced a new direction for U.S. international broadcasting that "seizes on the latest media tools and technology to stay one step ahead of those who seek to repress free information around the world."

As Chairman of the BBG, Isaacson oversees RFE, VOA, Radio Free Asia, Radio/TV Marti, Radio Sawa, and Alhurra TV, which have a combined weekly audience of more than 171 million people.

"And just as the founders of Radio Free Europe succeeded in developing creative and innovative ways to get news and information to people suffering behind the Iron Curtain, so too must today's U.S. international broadcasters respond to modern threats to freedom in new and inventive ways."

Speaking at the Newseum in Washington, D.C., Isaacson said, "America cannot let itself be out-communicated by its enemies."

"Our traditional role of delivering the news top down needs to be complemented by a new approach that catalyzes social networks," said Isaacson. "By creating peer-to-peer global communities, we help guarantee the universal human right of access to the free flow of information."

... "We remain a lifeline for people living in war zones and under authoritarian rule who seek accurate and reliable news," said RFE President Jeffrey Gedmin, who moderated tonight's reception.