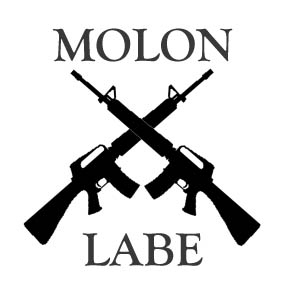 A handful of people have been arrested by the FBI’s anti-terrorism task force in connection with an investigation of an Adrian, Michigan-based Christian militia group — Hutaree, a group that claims it is made up of Christian soldiers preparing for a war with the anti-Christ.

Over the weekend, a large number of agents, aided by helicopters and the Department of Homeland Security, swept through Michigan, Ohio, and Indiana in raids that were apparently part of a probe into the group’s activities, claim numerous news reports from the Detroit area that quote FBI officials and/or unnamed sources.

More will be known tomorrow because suspects are expected to appear in U.S. District Court in Detroit. The arrests are sure to thrust the little-known Hutaree group into the national spotlight.

A group of men dressed in combat gear pose for a photo in a forested area, armed with assault rifles, on the group’s website along with the statement, “Preparing for the end time battles to keep the testimony of Jesus Christ alive.” The group further explains itself on the website: “We, the Hutaree, are prepared to defend all those who belong to Christ and save those who aren’t. We will still spread the word, and fight to keep it, up to the time of the great coming. Being Hutaree is to stay the Testimony of Christ alive, and follow a motto, John15:13, ‘Greater love hath no man than this, that he lay down his life for his friends.'”

The Hutaree’s website also has online forums, including one called the “Evil Jew Forum,” where people “talk about being an evil Jew and how we are taking over the world in our own private forum where no one else can see. Shalomi or something.” Another forum includes, “Local Threats/Intel,” where participants are invited to “post any intel relating to local threats to the Hutaree such as government operations against us or Ed’s constant playing of Dancing Queen (something wrong with that boy).” Another forum is simply called “Weapons,” where people discuss “the things you kill with.”