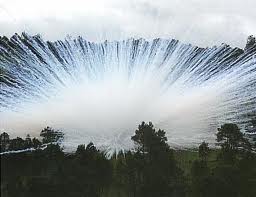 ” … Around 20,000 civilians are believed to have been killed or injured by explosives since the end of the war. Some 40 percent of the victims in the past 10 years have been children. … “

The explosive US “legacy” in Laos has roots in the genocidal brain of Henry Kissinger — a post-WW II recruiter of Nazis for the US intelligence undergound — an American media “hero” to the present day: “Mr. Kissinger’s most significant historical act was executing Richard Nixon’s orders to conduct the most massive bombing campaign, largely of civilian targets, in world history. He dropped 3.7 million tons of bombs between January 1969 and January 1973 – nearly twice the two million dropped on all of Europe and the Pacific in World War II. He secretly and illegally devastated villages throughout areas of Cambodia inhabited by a U.S. Embassy-estimated two million people; quadrupled the bombing of Laos.” — AC

Two young Laotians are touring the U.S. to educate Americans on the dangers of unexploded bombs dropped on their country by the U.S. during the Vietnam War and to raise funding for the removal of these dangerous explosives.

Thoummy Silamphan, 26, who lost a limb to unexploded ordinance, and Manixia Thor, a 25-year-old leader of a female bomb clearance team, joined Washington-based nongovernmental organization Legacies of War on its “Voices of Laos” tour across a dozen cities.

The U.S. military dropped two million tons of bombs on Laos over a nine-year period up to 1973 while attempting to disrupt the Vietcong supply line known as the Ho Chi Minh Trail during the Vietnam War.

Experts estimate that about 30 percent of cluster bombs failed to explode after they were dropped from high-flying U.S. aircraft over Laos and that much of the country’s northern region and its eastern border with Vietnam remain contaminated with the explosives.

“To this day there are 600 living survivors of UXO [unexploded ordnance] explosions and many of them are children, Thoummy told RFA’s Lao Service in an interview last week.

“Of the 600 survivors, less than 100 have received any aid and are in desperate need of it,” he said.

The Voices of Laos tour kicked off on April 3 in New York when the United Nations marked the International Day of Mine Awareness and Assistance in Mine Action.

Funded by the U.S. State Department, the trip has taken the two young Lao speakers through California, Oregon, Washington, and Minnesota, and culminates in the U.S. capital on April 30—the anniversary of the end of the Vietnam War.

They have held discussions along the way on how individuals and communities in Laos are affected by unexploded Vietnam War-era ordnance and bombs, how the problem is being addressed in the country, and ways in which people in the U.S. can help to clear Laos of bombs and support survivors of accidents.

In need of aid

Thoummy said that without support, many of the victims of the unexploded bombs feel that they have become a burden on their loved ones—draining the family’s resources.

“Some could not live [with themselves after] the explosion and ended their own lives. They felt worthless for not being able to help their families because they could not farm as they used to,” he said.

“It’s so sad what remains from the war—that legacy still harms innocent Lao people, even though the war is long over.”

Thoummy lost his left arm to a cluster bomb at the age of eight while digging for bamboo shoots to make soup near his home in Xiengkhouang province.

After the accident, he was viewed with pity by his community and no longer dared to go to school. He said that he fell into a deep depression and wanted nothing other than to die. But he said that his family worked hard to help him adapt and that one day he was lucky enough to receive assistance from an American who supported him financially through high school and university in Vientiane.

Thoummy realizes that he is lucky to have been one of the very few to receive aid and said he wants other victims in Laos to receive the same opportunities that he did.

“I would like Americans to be aware of the UXO problems in Laos and help us out,” he told RFA. We need to find additional sources of aid for UXO clearance and for the victims.”

Manixia, who is ethnic Hmong and has a 2-year-old son, works for the British charity Mines Advisory Group. She told the Associated Press that 15 years ago her uncle lost his left hand while attempting to extract ball bearings from inside a cluster bomb.

“I came here because I want to share with people the continuing dangers of UXO in Laos,” she told AP.

“There’s still a lot of work to do [to clear UXO] and not enough resources to do it. I don’t want people to be injured like my uncle was, or for my son to grow up and also be hurt.”

Thoummy said that during the Voices from Laos tour he has discussed issues related to UXO that very few Americans were aware of. But he said that his audiences were eager to learn and that many expressed an interest in helping clear Laos of ordnance. He said he was eager to travel to Washington to meet with lawmakers on Capitol Hill before returning to Laos at the end of the month.

Around 20,000 civilians are believed to have been killed or injured by explosives since the end of the war. Some 40 percent of the victims in the past 10 years have been children.

International assistance for bomb clearance in Laos began in earnest only about 20 years ago and experts believe that it will take many more decades to ensure that affected areas are safe. Since 1997, the U.S. has provided U.S. $47 million in assistance, including U.S. $9 million in 2012.

Last July, Hillary Rodham Clinton became the first U.S. secretary of state to visit Laos since 1955. She met with the victim of a cluster bomb and pledged to deliver more assistance to the country for clearance efforts.

Previous Article
Former GOP Candidate for Mississippi State Rep. Charged in Ricin Mailing Case — AND for Child Molestation
Next Article
The Propaganda System that has Helped Create a Permanent Overclass is Over a Century in the Making 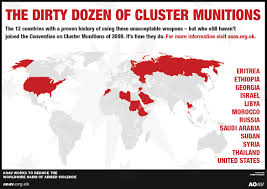 US Accuses … Forgetting its Own Use of Cluster Bombs and WMDs