” … Bruce had once tried to start his own militia. He told an FBI agent that he was afraid of the recently-elected President Obama, who he thought was out to take away his guns. …. “ 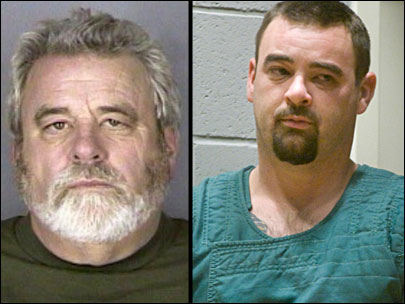 Josh Turnidge (right) is trying to pin blame on a bombing that left two police officers dead on his dad.

The sad thing about anti-government nuts is that they suck at limiting collateral damage. Take Bruce and Josh Turnidge, for example. A father and son team accused of killing two police officers in a botched bank bombing.

On December 12, 2008, prosecutors say the Turnidges left a bomb outside of a bank in Woodburn, Oregon in a poorly thought-out attempt to gin up some cash. Bomb technician William Hakim took the explosive inside and was dismantling it when it was inadvertently triggered by a signal from a passing trucker talking on his CB radio on nearby I-5.

Hakim and a police captain were killed. Woodburn’s police chief lost his leg.

The FBI quickly turned its attention to Bruce, who was running a failing biodiesel business with his son. But prosecutors say they’d started telling family members to expect a windfall soon.

Bruce, 59, and his boy had allegedly begun talking about robbing banks. A turn to crime that fit with their wacko beliefs about government intrusion.

Bruce had once tried to start his own militia. He told an FBI agent that he was afraid of the recently-elected President Obama, who he thought was out to take away his guns. He’d also spoken about how the Oklahoma City bombing was a good thing, which is a strange view to hold considering the brunt of that blast was felt in a children’s nursery. (Remember that thing about collateral damage?)

When police raided Bruce’s offices they found plywood bearing the outline of the metal box that held the bomb. Not overwhelming evidence, to be sure. But fortunately for prosecutors, son Josh, 34, is now turning against his dad.

Josh’s defense lawyer told a court that his client’s father always had a few hare-brained schemes ready for deployment. He also said he found his dad the day after the bombing in his shop muttering, “No one was supposed to get hurt.”

Unfortunately for Josh, he doesn’t look so innocent either. Police say he’s linked to a pair of cell phones used to call in the bomb threat. A recording taken of the call indicates a much younger voice. And handwriting analysis links Josh to a calculation of how much $24 million in $100 bills might weigh, indicating that someone was thinking ahead to their getaway plan.

Both Turnidges are facing multiple counts of aggravated murder, among other charges. If found guilty they could face the death penalty.

Human Experimentation: US to Apologize for Medical Atrocities in Guatemala
Oct 01