Iraq Election – A ‘Birther’ Movement and Comparisons to Nazi Germany

Ahead of Iraq election results due today, the main challenger to Prime Minister Nouri al-Maliki – Ayad Allawi – has been criticized for his mother's Lebanese citizenship and his ties to the CIA, with some comparing an Allawi victory to the Nazi gains in 1930s Germany. 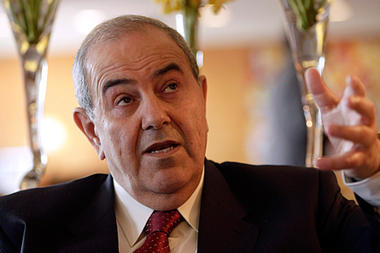 With Iraq election results expected in a matter of hours, secular Iraqi candidate Ayad Allawi has overcome extensive political maneuvering against him and emerged as the main challenger to incumbent Iraqi Prime Minister Nouri al Maliki, whose State of Law coalition is tied with Allawi's Iraqiya alliance in a race that's too close to call.

With only a few thousand votes now separating the Allawi and Maliki coalitions, the election has shown that US forces are preparing to withdraw from a deeply fragmented Iraq in which sectarian interests remain paramount. As Allawi's ticket has gained steam, Maliki and other rival Shiite Muslims have hinted that their followers would rise up rather than accept a winning bloc of newly emboldened Sunnis, secular Shiites, and factions that they say are linked to Saddam Hussein's Baath Party.

Before the March 7 parliamentary elections, Allawi's political enemies purged his ticket of anyone they considered a Baathist, and on election eve, they disqualified many of the replacement candidates, too. Then, they took to the airwaves and the Internet to label Allawi a CIA tool, a Saddam Hussein sympathizer, and a sellout to his fellow Shiites for allying with prominent Sunnis. Finally, they questioned whether his mother's Lebanese citizenship barred him from seeking the post of prime minister, a strategy akin to the "birther" movement against President Barack Obama.

"It's very difficult for the political forces in power to accept that the Iraqiya collation led by Ayad Allawi could possibly reap such results in the elections," said Haider al Musawi, a political analyst at an independent, Baghdad-based research institute. "In their minds, the majority of the population of Iraq is Shiite and would, therefore, vote for Shiite parties. In spite of all the nationalist, nonsectarian propaganda, they took that for granted and therefore are shocked that quite a large number of Shiites must have voted for the secular Iraqiya coalition, too."

A full tally of votes from the elections is due on Friday. Iraq's interior minister Thursday called for a delay because of the high potential for unrest, but Iraq's election commission refused to postpone the results.

In recent days, Maliki associates have taken to the streets in small protests and warned of a possible Shiite uprising if the votes don't end up in Maliki's favor. The prime minister himself demanded a manual vote recount in a sternly worded communiqué that warned of violence and invoked his status as commander-in-chief.

With the long-awaited results comes a new round in a battle that's far larger than Maliki and Allawi, two politicians with strongman tendencies and broad popular bases. Baghdad's political and clerical elites are casting the race as a fight for whether Iraq will continue down the thorny path of Shiite-led democracy or revert to the secular, pan-Arab authoritarian rule of the ancien regime. It's political hyperbole of the kind that leads to street violence in Iraq.

"There are some figures on [Allawi's] slate that are not acceptable. There are still characters who glorify the former regime or do not accept the current situation," said Jalaladin al Sagheer, a well known Shiite cleric who ran, and lost, as part of the main Shiite alliance. "We have good relations with Allawi and we appreciate his efforts against the former regime, but we want a person who's acceptable by all sides."

Allawi's supporters – chief among them Sunnis who've grown tired of being on the sidelines and are counting on him to represent their interests – view his electoral success as a pushback against Shiite religious parties with close ties to neighboring Iran. Allawi's detractors, especially Shiite leaders who spent years trying to topple Saddam, are riling up their followers by telling them bluntly that an Allawi win is akin to a renaissance of the Baath Party.

Video-sharing portals, social-networking sites, and the Arabic-language press are full of sectarian-laced propaganda from both camps. Religious factions are beseeching Maliki to rejoin his former Shiite allies and blame him for splitting the Shiite vote, paving the way for Allawi's strong showing.

An online article that likens Allawi's success at the polls to the Nazi Party in 1930s Germany is getting wide circulation on Iraqi blogs. The author, Taqi Jassim Sadiq, warns that an Allawi win would mean renewed Arab persecution of the Kurdish minority, a possible military coup, and a rolling back of so-called "de-Baathification laws," which identify and remove former Baath Party members from holding state jobs.

Even Sheikh Khaled al Mullah, a Sunni cleric from the predominantly Shiite heartland of southern Iraq, joined in the calls for Shiite parties to unite as a front against Allawi's secular, mixed-sect ticket, "lest the Baathists enter through the window after they were expelled through the door."

Predictably, Allawi's Sunni patrons in the Arab world, especially Saudi Arabia, are thrilled with the Iraqiya coalition's strong showing, hoping the bloc can stay together and act as a foil against archrival Iran's designs on the region. Hussein al Shabakshi, a Saudi columnist, dismissed the smear campaign against Allawi as evidence that Maliki's just a sore loser now in desperation mode.

"All Maliki could do in facing Ayad Allawi and his slate is to accuse them of being Baathist and of harboring old-fashioned Baathist ideologies, thus bringing out the scarecrow of the former regime to frighten people," Shabakshi wrote in the Saudi-funded Sharq al Awsat newspaper.

Allawi's Sunni supporters in provinces to the north and west of Baghdad are willing to forgive Allawi for a lot – including his longtime ties to the CIA.