Censorship Nuremberg Film Suppressed by the OSS & War Dept. to Premiere in Toronto

" ... The English-language version of Nuremberg was never properly completed or officially released, people have never really had a chance to see how the Nuremberg trial was actually conducted. ... More than 60 years later, there are many people alive who really don’t know anything about the trial. ... "

Nuremberg: Its Lesson For Today has been called “one of the most historic films never seen,” even though it concerns something that can never be forgotten: the Nazi brutality of World War II. 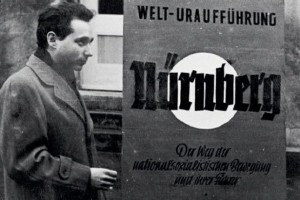 The 1948 documentary revealed in the starkest of terms the extent of Nazi complicity in the war and Hitler’s genocidal policy against the Jews and others. The film is framed by footage of the post-war Nuremberg trial, in which many of Hitler’s most dedicated disciples were brought to justice.

Yet Nuremberg is only now receiving its North America premiere, which will happen 7 p.m. Sunday at the Bloor Cinema, as a major presentation at the Toronto Jewish Film Festival (April 17-25, details at www.tjff.com).

The film was viewed widely in Germany, but it is almost unknown on this side of the Atlantic. U.S. authorities sought to keep it out of North American theatres, fearful that it would provoke a taxpayers’ revolt against the European rebuilding policy known as the Marshall Plan, which included funds for reconstruction of Germany.

The suppression of the film occurred even though Nuremberg was made under the authority of the U.S. War Department and the Office of Strategic Services (OSS), the precursor of the CIA. The director was Stuart Schulberg, the youngest member of the field photo/war crimes unit of the OSS. He was the brother of Budd Schulberg, the Oscar-winning screenwriter of On the Waterfront who also worked for the OSS during the war. Nuremberg makes extensive use of evidentiary footage of Nazi atrocities gathered by Budd Schulberg’s team, which was presented at the Nuremberg trial.

Hollywood producer Sandra Schulberg (Quills), the daughter of Stuart and niece of Budd, has spent the past five years restoring Nuremberg and preparing it for the wide audience it never previously had.

“I’d like to think that our world — as it gets smaller and as communication barriers break down — is slowly but surely making progress towards the day when it is unthinkable that we commit crimes against the peace, war crimes and crimes against humanity,” she wrote via email.

“And I hope that, by making Nuremberg accessible at last, I can play a tiny role in hastening that day.”

Prior to coming to Toronto to attend Sunday’s screening, Schulberg wrote to The Star about her work with fellow filmmaker Josh Waletzky, quoting in parts from an essay she wrote about the project ...

Q. Who made the decision in 1948 to ban the film from U.S. theatres? How far up the political chain of command did this decision go? Were Canadian politicians or bureaucrats involved in this, and Canada included in the ban, to your knowledge?

A. I wish I knew the answer to this question. None of the documents unearthed so far attributes specific names or titles in the chain of command. And by the way, I’m not sure I could go so far as to use the word “ban.” It makes for good publicity now — “Banned in the USA!” — but I think it was more complex than that. I think the War and State Department officials faced a real and complex dilemma, and there may not have been unanimity. Last summer, for instance, we (my senior archival researcher Lisa Hartjens) found a remarkable letter from Universal Pictures saying that the film was much too gruesome to show to an “entertainment-seeking” public, so I now think there were people in the administration who were making a bona fide effort to have the film distributed by a major studio. We’ve found nothing to suggest that Canadian authorities were consulted about the decision.

Q. The film is described as “controversial” in terms of U.S. attitudes in 1948, but was there in fact a debate about it in North America at the time? Or did bureaucrats simply block it from this side of the Atlantic, judging it to be potentially controversial?

A. I’ve described the decision as “controversial” because the three investigative news stories (by reporter John Norris) published in the Washington Post in September 1949 quote well-known writers and journalists (e.g., William Shirer, John Gunther, Walter Winchell) who declare themselves to be outraged that the government is sitting on the film. Winchell went on to write a column in The Daily Mirror that he titled “Hall of Shame,” in which he excoriated the unnamed government officials. At that time, no one would go on record for the Washington Post story about the decision. We also found letters sent by Pare Lorentz (actually by his attorney), who offered to buy the film from the War Department so that he could release it on his own. But his offer was refused. Many years later, he discussed his frustration in an interview.

And Justice Robert H. Jackson commented on his frustration with the situation. Jackson had played a key role — perhaps a first for a sitting Justice of the Supreme Court — in approving the Schulberg script, and later approving the version completed for German release. Later, he apparently requested a print to show at a meeting of the N.Y. Bar Association, but wound up having to show the Soviet film about the trial, Sud Narodov (Judgment of the People), instead.

Q. There seems to have been serious concern that the film’s revelations of Nazi atrocities would hamper the rebuilding efforts of the Marshall Plan. Do you think people would have rebelled against rebuilding Germany if the film had been widely seen?

A. I think it is possible that if Nuremberg had been widely released in U.S. theatres during 1949 it could have soured segments of the American public on the notion of rebuilding Germany, which was a major plank of the European Recovery Program — known more colloquially as the “Marshall Plan.”

Q. I was surprised to learn from the film that not all of the high-ranking Nazis tried at Nuremberg received death sentences. Albert Speer and Rudolph Hess, for example, were given life imprisonment. Do you know why there was such disparity in the sentencing?

A. Because the English-language version of Nuremberg was never properly completed or officially released, people have never really had a chance to see how the Nuremberg trial was actually conducted. Even people involved as prosecutors at the trial were never given the opportunity to see it. And of course, today, more than 60 years later, there are many people alive who really don’t know anything about the trial ...