The video above was made to put all the evidence that Dennis Gilman and Stephen Lemons, of the Phoenix New Times, have compiled over the years. It includes video of Russell Pearce at neo-Nazi rallies (also the still YouTube video above). Russell Pearce is the Senate President of Arizona, and author of SB1070. 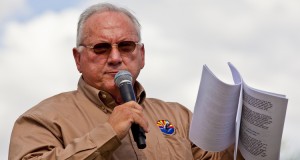 Russell Pearce – The Architect of Hate in Arizona.

While there is a lot of talk about hate-radio lately, let’s not forget about the most powerful man in Arizona.

Senate President Russell Pearce has a veto-proof majority. He can introduce legislation and get it passed without the governor.

Russell Pearce is the sponsor of SB1070, which was written by a known hate group, FAIR, and Kansan Kris Kobach.

Russell Pearce shrugged it off and even attended a neo-Nazi rally with JT Ready!

As long as Russell Pearce is in charge, the attacks on minorities and immigrants will continue while his private prison lobbyist friends make more money building more prisons. Russell Pearce is writing bills to ensure they will be filled and especially with schools receiving more cuts in spending during Arizona’s Republican rule.

The next big cut in spending comes on March 4th, when Arizona will use HB2281 to cut 10% of TUSD’s budget.

Do people even care?