IG Farben and the Holocaust 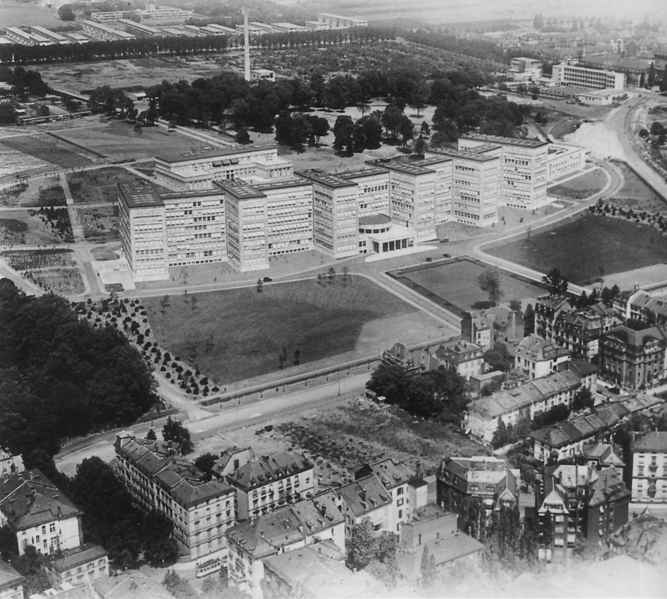 I.G. Farben was a German Limited Company that was a conglomerate of eight leading German chemical manufacturers, including Bayer, Hoechst and BASF, which at the time were the largest chemical firms in existence.

Prior to the First World War these firms had established a “community of interests – Interessengemeinschaft – hence the initials I.G. which merged into a single company on the 25 December 1925, thus constituting the largest chemical enterprise, in the whole world.

Costly innovations such as the production of synthetic rubber (Buna) from coal or gasoline, persuaded IGF, when the economic crisis of the 1920’s and 1930’s that the company should establish close ties with Hitler and the Nazi Party.

At an early stage Hitler had become aware of the opportunity for Germany to become independent of imported raw materials by means of the processes established by I.G. Farben. In order to be profitable the new IGF products needed an assured market, and Hitler indicated that he would be ready to give guarantees for the purchase by the state of these products, in appropriate quantities.

Notwithstanding the presence on the IGF board of several Jewish members, and the fact that even after 1933 Nazi propaganda continued for a time to attack IGF as an example of an international Jewish firm that was exploiting its workers, the contacts between IGF’s management and the government became increasingly close, since the products of the great chemical conglomerate were an indispensable element in the Nazi’s drive to re-arm.

The Four-Year plan proposed by Hitler in 1936, which intended to put the entire German industry on a war footing, further enhanced IGF’s influence. A member of the board, Carl Krauch, was given a leading position in the organisation, headed by Goering that had the task of implementing the Four–Year Plan. By this time the company was also adapting itself to the regime’s ideological requirements; in 1933 Bosch had still objected – although in vain – to the removal of Jewish scientists from the company and from various scientific institutions, but by 1937 no Jews were left in the IGF executive or on its board of directors.

The majority of the board members joined the Nazi Party; by means of economic and political blackmail, IGF took over important chemical factories in the areas annexed to the Reich or occupied by the Germans.

Bosch resigned his post as chief executive officer in 1935 and was instead elected chairman of the board, his successor as chief executive officer was Hermann Schmitz, a member of the BASF board. After Bosch’s death on the 26 April 1940 , Krauch took his place as chairman of the board, adding this position to the different posts he held in the Four-Year Plan administration.

More than anyone else, Krauch personified the link between private industry and the growing government involvement in economic life during the Nazi period.

In connection with the economic preparations for the forthcoming war against the Soviet Union, the IGF board, with government support, decided to establish an additional Buna works and installations for the production of synthetic fuels.

The board decided on Auschwitz in Upper Silesia, as the place where the new installation was to be located, not only because of the excellent rail links and the proximity of its coal mines, but primarily because the concentration camp being constructed offered IGF with a considerable and cheap workforce, up to 10,000 prisoners to build the new plant.

Board members Otto Ambros and Heinrich Butefisch were responsible for the Auschwitz plant in their capacity as the managers in charge of Buna and gasoline respectively. Dr Walter Durrfeld became general manager.

At first, the plant managers protested against the maltreatment of the prisoners working in the plant and their poor physical condition, but Durrfeldeventually went along with SS policy, in order to speed up the work.

There were 5 IG Farben owned or contracted manufacturing plants that produced Buna, most of which utilized slave labor:

Dowry: After a contract was initiated by a March 2, 1942 contract with "IG Farbenindustrie AG Auschwitz", the synthetic rubber and oil plant at Dwory (near Auschwitz III-Monowitz, which provided forced labor) was under construction in November 1943). The Buna Chemical Plant) produced synthetic oil and rubber (from coal) was the beginning of SS activity and camps in this location during the Holocaust. At its peak in 1944, this factory made use of 83,000 slave laborers. The pesticide Zyklon B, for which IG Farben held the patent, was manufactured by Degesch (Deutsche Gesellschaft für Schädlingsbekämpfung), which IG Farben owned 42.2 percent of (in shares) and which had IG Farben managers in its Managing Committee. Today, the plant operates as "Dwory S.A."

Frankfurt: In addition to the IG Farben building at Frankfurt, a Hoechst AG chemical factory in Frankfurt was bombed by the RAF on September 26, 1944.

Waldenburg: An IG Farben plant was at Waldenburg

In the middle of 1942 a new section of the concentration camp – Auschwitz – Monowitz was established, close to the site of the I.G. Farben works, to house the prisoners working there and thereby save the time-consuming daily march from and to the main camp – Auschwitz 1.

The prisoner’s performance however, never came close to IGF’s expectations and was always considerably inferior to that of workers who had their liberty. The Buna production never got started – in part because of the Allied air attacks – and only small quantities of synthetic fuels were actually produced.

After a full tour of the various industrial and agricultural project Himmler attends the full extermination process at Birkenau, where he witnesses the unloading, the selection of the able-bodied, the mass murder by gassing in Bunker 2.

Following this Himmler and his retinue undertake a tour of the Buna plant and the installation of a sewage gas plant. The tour of Buna is extensively photographed.

After the defeat of the Third Reich at the International Military Tribunal held in Nuremberg, the United States, as the occupying power, conducted trials against the top officials of three major industrial concerns- Krupp, Flick, and I. G. Farben.

The prosecutors were convinced that their material would provide ample evidence that even long before Hitler’s accession to power, the managers of IG Farben had desired a dictatorship that would be "able to act without taking the whims of the masses into consideration" and that they had wanted to "dominate the entire European chemical industry, if possible also outside Europe". Even before Hitler seized power, IG Farben had entered agreements with him for government support for the expansion of their synthetic gasoline facilities.

In the IGF trial the accused were the chairman of the board Carl Krauch and several of his associates including Durrfeld. The major charges were:

2. Crimes against humanity by looting the occupied territories.

3. Enslaving and murdering civil populations, prisoners of war and prisoners from the occupied territories.

Prosecutor Telford Taylor asserted that the relations between IG Farben and the Nazi state had been "far beyond the scope of technical concerns and extremely aggressive and focused on war in every aspect". However, this evidence failed to impress two of the three judges.

Against the last four defendants, the decisive factor was their role in the construction of the Auschwitz installations, the tribunal did not find the IGF board criminally involved in the poison-gas deliveries made by the Degesch company.

The sentences imposed on Ambros and Durrfeld were the most severe – eight years each, by 1951 however, all the IGF officials convicted had been released from prison.

Under Allied Control Council Law No.9 of the 30 November 1945, IGF assets were seized by the Control Council, which in turn handed them over to the four occupying powers, instructing them that installations for the manufacture of war material were to be destroyed, certain plants were to be appropriated as war reparations, and the entire conglomerate was to be broken up.

The IGF plants located in the Soviet zone of occupation were nationalised, however, in the zones occupied by the Western powers no change of ownership took place.

Basically the conglomerate was broken up into its original three major component parts – Bayer, BASF, and Hoechst – whose balance sheet by the end of the 1950’s already exceeded that of the original IGF.

The final IGF Liquidation Act of the 21 January 1955, removed all the remaining restrictions imposed by the Allies; many of the top officials of IGF including Ter Meer and Ambros were soon again in leading positions in the German chemical industry.

A court of the Federal Republic of Germany in a 1953 decision established the principle that a Jewish prisoner who had been forced to work for IGF in Monowitz had a right to sue the company for compensation.

In the wake of this decision and after prolonged negotiations, the residual company IGF in Liquidation agreed to put 27 million deutschmarks at the disposal of the Jewish Material Claims Conference to cover the claims of all Jewish forced labourers and prisoners who had been compelled to work at Monowitz.

The payment was made on a purely voluntary basis and was not to be classed as an admission of guilt. IGF did not pay any compensation to non-Jewish forced labourers and prisoners.