Heidegger and Being and Time Among the Nazis (Book Review) 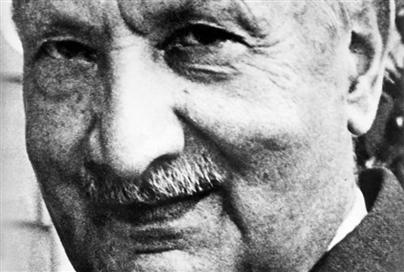 " ... Heidegger was not a philosopher who for a time became a Nazi; he was a philosopher of Nazism. His adherence to it was not an error but a natural outgrowth of his own thinking. Like Hitler, Heidegger was an enemy of the belief in reason and humanity that sustains philosophy. Heidegger and Hitler were a perfect fit ... "

The world will not be rid of Martin Heidegger's Nazism-infused philosophy for generations to come, writes Robert Fulford, because his admirers are tenured at universities around the globe.

How serious a Nazi was Martin Heidegger, how long did he maintain his Nazi convictions and how should the answers to those questions affect his status as one of the towering thinkers of the 20th century?

His political history has produced waves of controversy among his fellow philosophers in the last 65 years. It's resurfaced through an angry, dense and difficult book, Heidegger: The Introduction of Nazism into Philosophy (Yale University Press), by Emmanuel Faye, a professor at the University of Rouen. It was first published in France and now appears in an English translation.

Admirers of Heidegger (1889-1976) passionately defend their hero. They admit that in 1933 he greeted the rise of Hitler with enthusiasm, proclaimed Nazi beliefs while serving for a year as rector at the University of Freiburg and described Hitler as the embodiment of the German soul.

But, his supporters claim, that was merely a phase that ended when he resigned his position as rector. Alasdair MacIntyre of Notre Dame University, a major voice in moral philosophy, typically called Heidegger's time as a Nazi "a short period." His blunder, the pro-Heidegger people say, should not obscure his greatness.

That opinion seemed to make sense for decades, with the assistance of Heidegger's own carefully obscure accounts of his politics, delivered in a disdainful this-nonsense-is-beneath-me style. Major figures across the West, most famously Jean-Paul Sartre, built their reputations on versions of Heidegger's thinking.

But in the last two decades a series of books have revealed that he was a much more deeply involved Nazi than many believed, that he kept the faith until the end of the Second World War and that he never got around to disowning his mistakes -- if, in fact, he considered them mistakes.

Emmanuel Faye goes much further. He says Heidegger was not a philosopher who for a time became a Nazi; he was a philosopher of Nazism. His adherence to it was not an error but a natural outgrowth of his own thinking. Like Hitler, Heidegger was an enemy of the belief in reason and humanity that sustains philosophy. Heidegger and Hitler were a perfect fit.

Faye grounds his views in Heidegger's published lectures and the contents of seminars he gave. Working his way through Heidegger, thought by thought, he keeps coming upon the same ideas that animated Hitler. He notices "a progressive dissolving of the human being ... into a community of people rooted in the land and united by blood" -- a "community of biological stock and race." Those with the patience to read Faye will probably find his arguments persuasive, though Heideggerians in France have disputed them.

Faye doesn't want Heidegger's books burnt; he just wants them transferred from the philosophy sections in libraries to the archives of Nazism. While supporting his analysis with on-the-ground documents, he includes an evaluation made in 1938 by a Nazi bureaucrat assigned to check up on Heidegger, four years after he resigned as rector. It was framed as a questionnaire. Did he subscribe to the party newspaper? "Yes." Did his children belong to a Nazi youth organization? "Yes." Did he approve of the Nazi state? "Yes." Had he ever made negative remarks about it? "No." Does he buy from Jews? "No." The functionary marked him down as "a positive force" in the University of Freiburg.

Faye addresses his deconstruction of Heidegger in a relatively solemn tone. But the Chronicle of Higher Education in the U.S. decided that the subject deserved a more raucous approach. Last fall, it published Heil Heidegger!, an article by Carlin Romano, a University of Pennsylvania philosophy teacher. Romano described Heidegger as a "pretentious old Black Forest babbler," overrated in his own time, hideously overrated ever since.

Heideggerians in American universities weren't going to take that. Romano's article drew 167 replies, condemning it as scandalous, ill-informed, anti-intellectual, oafish, simplistic and presumptuous. One reader said, "This piece is reminiscent of watching a great Shire horse being pestered by a gnat." Another, "It is absolutely unbelievable! Someone who does not even have a PhD is criticizing Heidegger's contributions to philosophy!" One pro-Heidegger reader, apparently intent on setting a record for damning with faint praise, said: "Heidegger was an opportunist, a political suck-up, and a slimy little man. But as a philosopher, he had much to say -- mixed together with no little dreck -- which is challenging."

Curiously, people have stopped discussing Heidegger's embarrassing style. No matter who translates him, his prose emerges in English as a literary catastrophe, a gridlock of invented jargon. It means less than it says but insists always on its own profound seriousness. There may never have been another philosopher so willing to browbeat readers with his own gravity. He leaves no doubt that something vital is at stake whenever he applies pen to paper -- the future of civilization, perhaps, or the fate of Germany, which were in his mind much the same thing. Heidegger wrote with an ugly scowl on his face. It's no surprise that he seldom mentioned Socrates, who demonstrated a light heart even when confronting complex questions.

Heidegger became a great favourite of the most appalling paranoids among professional social theorists, like Michel Foucault and Louis Althusser, who passed on their ideologies to an army of acolytes. The Canadian philosopher George Grant was among the great admirers of Heidegger; Grant's essentially dark view of Western civilization shows the baleful influence of the Master.

Heidegger's effect on the teaching of the humanities has done much to deaden the appreciation of literature and art in the universities. In intellectually ambitious art magazines, he's inescapable. Typically, Michael Fried, an eminent American art critic, spent a couple of dozen pages of his recent book, Why Photography Matters As Art As Never Before (Yale University Press), trying vainly to show that the spectacular backlit photos by Jeff Wall of Vancouver illustrate Heideggerian thought. In extremely subtle ways, of course.

When Carlin Romano began his article by asking "How many scholarly stakes in the heart will we need before Martin Heidegger reaches his final resting place as a prolific, provincial Nazi hack?" the question was purely rhetorical. Romano knows that Heidegger's admirers are tenured in universities around the globe, spreading the poison by turning out replicas of themselves among young scholars. The world will not be rid of Heidegger for generations to come.