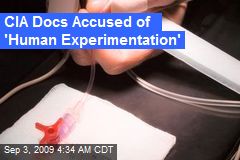 A National Research Council (NRC) 2008 report on a conference on Emerging Cognitive Neuroscience and Related Technologies examined briefly what it characterized as a "contemporary problem," the possibility of doing research on "war on terror" detainees, removed by the U.S. government from Geneva protections against experiments done on prisoners of war.

In a section of the report that looked at the "Cultural and Ethical Underpinnings of Social Neuroscience," the report's authors examined the "Ethical Implications" of these new technologies. The section explored the birth of the new field of bioethics, in response to the scandalous revelations of the Tuskegee experiments. The report noted that "On the whole, however, the system of protections for human research subjects is not well designed to capture instances of intentional wrongdoing," providing "rather... guidance for well-motivated investigators who wish to be in compliance with regulatory requirements and practice standards."

The report further described the history surrounding the importance of the rules that constitute the need for informed consent of research participants, and how the Nazi-era experiments led to the Nuremberg principle that "The voluntary consent of the human subject is absolutely essential." While claiming the current "formal procedures in place for the use of military personnel in medical experiments" are "stringent," that doesn't imply "that no abuses can occur, nor that convenient alternative frameworks (such as field testing) cannot be used to circumvent the research rules, but only that the official policies and procedures in the military are rigorous."

But even with such supposedly "rigorous" policies, the report's authors see a problem. They ominously ask whether "classified research can ever be ethically sound inasmuch as it lacks transparency, such as in the form of public accountability. For example, if a member of an ethics review board disagrees with a majority decision involving a classified human experiment, that member would be unable to engage in a public protest of that decision."

At this point in the discussion, another interesting, and even more ominous question rises up before the NSC panel (emphasis added):

A contemporary problem is the status of detainees at military installations who are suspects in the war on terrorism. Presumably, the ethical standards that apply to all human research subjects should apply to them as well. But if they are not protected by the provisions of the Geneva protocols for prisoners of war, the question would be whether as potential research subjects they are nonetheless protected by other international conventions, such as the Universal Declaration of Human Rights (United Nations, 1948). Those technical questions of international law are beyond the scope of this report.

Why should the question of research on detainees arise in this discussion at all?

Evidence of Military Research and Experimentation on Detainees

Jason Leopold and I have been investigating the possibility of research being conducted upon detainees at Guantanamo and other "war on terror" prisoners held by the Defense Department and the CIA. Back in September 2009, I published articles at Firedoglake, The Public Record, and Truthout that noted the research on "uncontrollable stress" conducted upon SERE survival school students subjected to mock torture predated the institution of the so-called "enhanced interrogation program of the CIA. The research was conducted by, among others, a CIA-linked psychiatrist, Dr. Charles A. Morgan III, who is affiliated with Yale University and the National Center for Post-traumatic Stress Disorder.

Morgan has denied his CIA affiliation, but for documentary evidence, see this list of participants at this 2004 DoJ/FBI conference.

This research used methods that were similar to those later instituted under a plan developed by James Mitchell and Bruce Jessen, formerly employed by the military's Joint Personnel Recovery Agency (JPRA), parent organization to the SERE program, to use coercive forms of interrogation on the new "war on terror" detainees, who the White House and their attorneys at the Office of Legal Counsel removed from the protection of Geneva Convention protocols. In a report on CIA experiments on torture, Physicians for Human Rights (PHR) noted in an appendix the existence of the Morgan research, but failed to make public the CIA connections, even though they certainly were aware of them.

Originally, the PHR report was going to include a footnote on the existence of a new protocol on human experimentation protections in the military signed by Paul Wolfowitz in early 2002. While they chose not to follow up on this, Leopold and I conducted a seven-month long investigation into the March 2002 issuance of Department of Defense Directive 3216.02, "Protection of Human Subjects and Adherence to Ethical Standards in DoD-Supported Research." We noted that "the Wolfowitz directive weakened protections that had been in place for decades by limiting the safeguards to 'prisoners of war'." Even more, it allowed for waivers of informed consent if the head of a DoD department thought it necessary. There had never been such loose rules on informed consent ever explicitly allowed in the history of military research, although no prominent ethicist had discussed this until we published our article. Prominent ethicist Alexander Capron was quoted in our story for calling these changes "controversial both because it involves a waiver of the normal requirements and because the grounds for that waiver are so open-ended."

While retaining the blanket prohibition against experimenting on prisoners of war, Wolfowitz softened the language for other types of prisoners, using a version of rules about "vulnerable" classes of individuals taken from regulations meant for civilian research by the Department of Health and Human Services (DHHS).

By removing the detainees from Geneva protections, and taking away "prisoner of war" protections, Bush and the White House lawyers, among them Jay Bybee, John Yoo and Alberto Gonzales, opened up the captured prisoners, many of them sold to the Americans for bounty reward, to possible experimentation.

DoD and HHS Acting Together on Experiments?

Buried in the Wolfowitz directive was a provision (4.4.1) that "actions authorizing or requiring any action by an official of the Department of Health and Human Services (HHS) with respect to any requirements" of research on "vulnerable populations" like prisoners "shall be under the authority of the Director, Defense Research and Engineering." The reason for HHS involvement was because research "supported or conducted by the Department of Defense that affects vulnerable classes of subjects" had to meet the protections of HHS's Common Rule language that covers protection of human subjects.

When queried whether there had ever been any DoD research on any kind of prisoner, or the use of HHS personnel to monitor such research, a spokesperson for Defense Research and Engineering indicated that they had no comment.

In 2002, there was another assault on prisoner protections for research, when Bush's Secretary of HHS asked for and received a year later a blanket waiver for all informed consent on prisoner experimentation for "epidemiological" reasons, including the taking of biological samples. In a future article, I will explore the repercussions of this new policy -- also never discussed by any ethical panel, and certainly not by the NRC -- on research upon prisoners, and more specifically the possibility of experiments done on the detainees at Guantanamo.

This further investigation may throw light upon the Guantanamo SOP wherein all detainees were subjected to a never-before-attempted use of mass administration of treatment doses of the controversial anti-malaria drug mefloquine (Lariam), as also  reported  in a special investigation by Jason Leopold and myself last December. The scandal was also the subject of an independent investigatory report  published at the same time by Seton Hall University Law School's Center for Policy and Research.

In a 2002 report on mefloquine adverse events, "Unexpected frequency, duration and spectrum of adverse events after therapeutic dose of mefloquine in healthy adults," published in top medical journal Acta Tropica, it was noted that 73% of the participants suffered "severe (grade 3) vertigo ..." which "required bed rest and specific medication for 1 to 4 days." Nevertheless, DoD maintains that the use of mefloquine was for public health purposes, to prevent malaria from spreading in Cuba. But as our investigation showed, talking with military medical experts, and examining other military responses to malaria threat, including in Cuba, no such use of such mass treatment doses, with its attendant dangers, was ever used or even proposed. Nor did DoD medical officers at Guantanamo demand the same protocols be used on foreign workers from malarial areas brought into the camp at this same time to work on building Camp Delta and other facilities at the naval base. The workers were employed by Kellogg Brown and Root, a subsidiary of Halliburton.

Was the mefloquine use part of an experimental protocol on the adverse side effects of the drug, a subject of much controversy within DoD at the time? Was it a method of softening up prisoners for interrogation? While calls for greater transparency go unheeded, further investigation by the press may bring answers to these explosive questions.