L.A. Times Blog: “Preventing Homosexuality in Utero: Could We? Would We? Should We?” 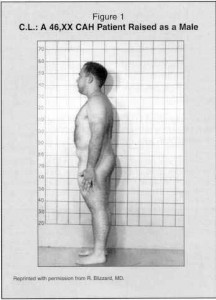 A workhorse drug that’s been around for decades has, in recent weeks, stirred up a biomedical debate that will likely resonate with any parent who’s ever asked him or herself: If I could prevent my child from being gay, would I?

Dexamethasone is a corticosteroid that has been widely used in the treatment of arthritis, of intestinal, kidney and thyroid disease, in certain kinds of cancers. It’s also been prescribed to — and used by — pregnant women carrying female babies who are at genetic risk of a condition called congenital adrenal hyperplasia, or CAH.

Children born with the genetic anomaly will need a lifetime of medication to ensure their normal growth, sexual development and reproductive function. But for girls, one manifestation of CAH is evident at birth: her external genitalia will look more masculine than feminine. The resulting person used to be called a hermaphrodite. The preferred term now is intersex, a condition of gender ambiguity that can be caused by a number of different conditions.

Dexamethasone, when administered in utero, appears to correct the development of a female fetus’ genitalia. As a result, it relieves parents and child of a difficult decision — to have later corrective surgery, with all of its risks.

That a parent should take it upon him or herself to “correct” a child’s ambiguous gender identity is debatable enough. (The Intersex Society of North America maintains that “parents’ distress must not be treated by surgery on the child.”) What ignites serious controversy is a side effect of  prenatal dexamethasone — its ability to feminize, not just the external genitalia of a girl with CAH, but her internal outlook and her behavior. That is significant because among CAH’s more subtle effects, according to Mount Sinai Medical Center endocrinologist Dr. Maria I. New, is that women who have it tend to be more masculine in their behavior and interests, including sexual attraction to women. New has been a leading researcher on CAH and, in an earlier practice, is reported to have prescribed dexamethasone. She and a research collaborator, Columbia University psychologist Heino F.L. Meyer-Bahlburg, has investigated at length the “psychosocial” as well as medical issues faced by those with CAH.

In short, dexamethasone seems to hold the promise not only of sparing a child a difficult and risky surgery, it may also redirect a sexual trajectory that will lead to bisexuality or lesbianism.

That, say bioethicists, is going too far. In a recent posting on the Bioethics Forum of the Hastings Center, a nonpartisan bioethics institute based in Garrison, N.Y., Alice Dreger, Ellen K. Feder and Anne Tamar-Mattis warn that treatment of the external manifestations of CAH are debaeable enough in and of themselves: But, in this case, that treatment will make it possible for some parents to take actions motivated — at least in part — by a desire to prevent their child from becoming a homosexual.

Dreger, Feder and Tamar-Mattis suggest that in insisting that homosexuality is not a choice but a biologically determined fact of identity, gay and lesbian rights activists may have set themselves up for medical researchers to see sexual orientation as a condition that can be “fixed.” They “should be wary of claims that the innateness of homosexuality will lead to liberation,” they wrote. Instead, it might “very well lead to new means of pathologization and prevention,” write the bioethicists.

Also unclear is whether the use of dexamethasone by pregnant women is safe — or for that matter, effective. Neither has been demonstrated by clinical trials. The prescribing of a drug in treatment of a condition other than that for which the Food and Drug Administration has approved it — called off-label — is very common and legal. But the debatable use of dexamethasone in pregnant women has caused sufficient concern among endocrinologists that the Endocrine Society next month is expected to issue a consensus document warning physicians who prescribe prenatal dexamethasone for CAH that the treatment should be considered experimental. That imposes far greater ethical strictures on physicians: They must seek the approval of an ethics and safety review board and satisfy other conditions designed to protect a patient’s rights.

Want to know more about what researchers have learned about the bases of homosexuality, and the ethical debates that result? Here’s an article on the subject from the LA Times Health section.

The Corporate Perversion of Journalism
Jul 26