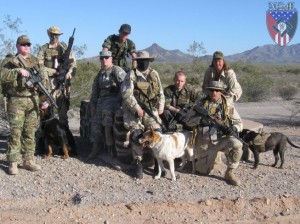 Neo-Nazis are currently conducting heavily armed patrols in and around Sanford, Florida and are "prepared" for violence in the case of a race riot. The patrols are to protect "white citizens in the area who are concerned for their safety" in the wake of the Trayvon Martin shooting last month, says Commander Jeff Schoep of the National Socialist Movement. "We are not advocating any type of violence or attacks on anybody, but we are prepared for it," he says. "We are not the type of white people who are going to be walked all over."Because nothing diffuses racial tension like gun-toting racial separatists patrolling an already on-edge community.

Schoep, whose neo-Nazi group is based in Detroit, tells Riptide the patrols are a response to white residents' fears of a race riot.

A group called the New Black Panther Party recently offered $10,000 for a citizens' arrest of George Zimmerman, Martin's shooter. Schoep said the bounty is a sign that "the possibility of further racial violence... is brimming over like a powder keg ready to explode into the streets."

The patrols are comprised of between 10 and 20 locals and "volunteers" from across the state, including some from Miami, he added. He couldn't go into specifics on what kind of firepower, exactly, the patrols had with them.

"In Arizona the guys can walk around with assault weapons and that's totally legal," Schoep said, referring to the group's patrols of the US-Mexico border. "What I can tell you is that any patrols that we are doing now in Florida are totally within the law."

Asked if the patrols wouldn't just make things worse -- spark a race riot, for instance -- Schoep insisted they were simply a "show of solidarity with the white community down there" and "wouldn't intimidate anybody."

"Whenever there is one of these racially charged events, Al Sharpton goes wherever blacks need him," Schoep said. "We do similar things. We are a white civil rights organization."

He went to great lengths to contrast his organization with the New Black Panther Party, who he blamed for scaring local whites and spurring the need for NSM patrols. Schoep admits that the NSM and the Black Panthers are actually alike in that they are both racial separatists. But he sees a double-standard in the government's treatment of the two groups.

"The Black Panthers have been offering bounties and all that," he says. "But if we called for a bounty on someone's head, I guarantee we'd be locked up as quick as I could walk out of my house."

Schoep was also quick to clarify that he isn't taking sides in Trayvon Martin's controversial shooting. "That's for the courts to decide," he says. Besides, Schoep says, Zimmerman's not even white.

"I think there is some confusion going on," Schoep says. "A lot of people think that this guy who shot Trayvon was white... but he's half Hispanic or Cuban or something. He certainly doesn't look white to me."

To some, sending in the storm troops seems like a sure way to incite -- not prevent -- a race riot. But Schoep says that's way off base.

"We don't wish for things like that," he says. "But there have been race riots in Detroit and L.A... So we know those types of things happen."

"You can either be prepared or you can be blindsided," he adds. "This way, if something were to touch off a race riot, we'd already be in the area."