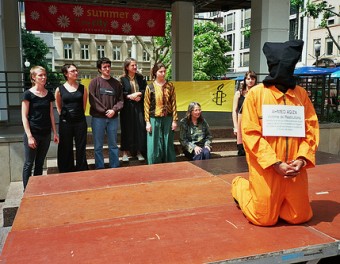 I received this interesting email from a reader that I think deserves its own blog entry. It centers on my brief account on the reading Sunday night at Long Wharf Theatre in New Haven based on the book "Torture Team," by Philippe Sands,  about how the U.S. policy on torture evolved. Performing in the reading were Vanessa Redgrave, Lili Taylor, Harris Yulin, Jeff McCarthy, Jay O. Sanders and Sands.

Here is the email I received from Ann Gerow:

"You were in the presence of the de facto international prosecutor of BushCo. He likely didn't cross the Atlantic just to speak to a small one-night audience in New Haven about his past book research.

WHAT DID SANDS SAY in Q&A? Is the international accountability community close to confronting BushCo?  Did Sands come to America to give notice?

Since Sands wrote "Torture Team: Rumsfeld's Memo..." in '08, a large amount of relevant official USG records have become public, through FOIA releases, piecemeal leaks, and the deluges from WikiLeaks. Sands' assessment of the criminality to be confronted has evolved and grown, his writings and comments clearly show.

There also have been the Senate Armed Services Comm. report on military interrogation and the SERE program, which was released in '09. It reported that Gen. Myers personally stopped the legal / policy review of the proposed Gitmo techniques, and Sands then branded Myers "complicit" in torture.

The Sen. Intel. Comm. narrative by Rockefeller of when they saw what legal memo came out early '09, but Feinstein's probe into CIA's rendition, detention, interrogation program, which was to have been completed in '09, has not been produced. 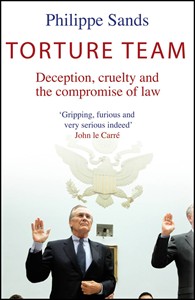 Since Sands' book in '08, we've learned, from records,  that Bush's  secret detention / rendition / interrogation and torture program was vast and that the laws were serially mangled to facilitate it. The Red Cross stated authoritatively, we've learned, that it's torture / war crimes. The CIA IG reported multiple crimes and violations of international law in the program, and appended to the report was voluminous backup, reportedly. Mandated UN experts stated authoritatively in a report last year multiple points of law, which a future tribunal can cite to, fingering many nations for various types of "complicity" wrt the explosion of international crimes of "secret detention" and "torture." The UN experts vetted and referred for immediate investigation, prosecution and restitution 24 specific cases, naming offender nations and the binding international laws that require their immediate action. US courts have dismissed these cases, and Scotus has the last "state secrets" civil case asking for cert. now. Last chance for the American high court.

Philippe Sands simultaneously slammed Bush's admissions and claims in a UK Guardian column. Critically, Sands linked Bush's use of torture to Bush's bogus claims for war on Iraq. Relying on tortured utterances wasn't innocent mistake, Sands implied, because expert interrogators uniformly say everyone knows that people undergoing torture interrogation say what they think the interrogators want to hear, whether it's accurate and true or not. What torture reliably produces is bogus information and false confessions, which Bush then used to got to war against Iraq. Bush's recent claim that Zubaydah's waterboarding / interrogation produced info that saved many lives "including in Britain" has not a shred of supporting evidence, Sands accused.

Sands is coming after BushCo for war of aggression on Iraq as the umbrella crime, it seems, under which all the other international crimes occurred. This is the legal framework that the US used at Nuremberg to prosecute German Nazi state officials and collaborators.

Outside the US, multiple relevant criminal investigations and human rights cases are underway that are the precedents for future legal confrontation of the US malefactors. Oxford U. Press, in preparation, is publishing an authoritative book that reportedly collects and analyzes the legal doctrines and points of law which the US elucidated and applied in the 12 Nuremberg trials that America alone prosecuted -- including the "justice" and "ministers" cases. US prosecuted stating our expectation that the law being laid down at Nuremberg would apply thereafter to the prosecuting nations and to all others.

One of the intents at Nuremberg was to stand up an international system that could prevent another world war. BushCo set out to destroy the international law of war (disapplying the Geneva Conventions) and human rights law (norming torture), selling it as a "Global War on Terror."

I believe that Sands and fellow lawyers, judges, academics, human rights experts intend to confront BushCo in an international tribunal to restore "rule of law" and get a judgment on war of aggression and underlying crimes including vast human rights abuses and war crimes. I believe it will include Nuremberg principles that America applied to Germany, plus current caselaw applying subsequent treaty / convention and customary international law.

Britain's constitution mandates that government operate under "rule of law" and take all necessary steps to restore it when there is a breach. There are many violations in Britain as she walked with BushCo., the chief malefactor.

If America can't get past the rightwing and if the law-mucking that Bush planted guming up the works make prosecution here impossible, Sands and other forces of accountability, I believe, will bring the prosecution abroad, after Britain's "complicity" is established.

So, WHAT DID SANDS SAY in the Q & A on Sunday night in New Haven?"

The UN's new special rapporteur on torture handily lives and works in the belly of the beast -- Washington, DC. Just days in office, he slammed Bush in an interview for claims and admissions Bush made on his book-hawking tour.

Thoughts? Share them in the "Comments" section of this blog. And be the first to know by following me on Twitter at http://www.Twitter.com/ShowRiz