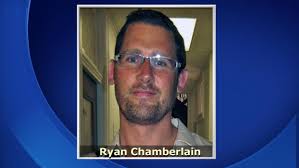 “… By San Francisco standards, Chamberlain was a far right ‘Marina moderate.’ He was far from a lefty liberal. …”

“He’s a classic political operative — crafty, cynical, but also really nice,” Adriel Hampton, a former SF Examiner political reporter, told the Guardian. “I always liked him, even when I was busting him in a story.”

Some San Francisco political insiders were up in arms about the FBI’s manhunt for Chamberlain, despite the law enforcement agency’s assertions that Chamberlain was “armed and dangerous” and possessed explosives.

“I’ve known the guy for a decade,” he wrote in a Facebook post. “I hired him as a contractor for a month or two in ’09 to handle some social media efforts for a client in North Carolina. And that for the second time in a few months, I am head-spinning surprised to learn of these allegations against another SF political operative. What. The. Hell?”

As a city hall insider and San Francisco political moderate (and former member of the Republican Central County Committee), Chamberlain helped run former Mayor Gavin Newsom’s succesful mayoral campaign in the Richmond District as a field organizer. In a letter released on Chamberlain’s iCloud today, he cited his experience with Newsom as one of the life losses that hurt him.

“Getting left out of the Newsom win was hard,” Chamberlain wrote. “But I was always able to override it by forcing some common sense onto my brain… but every time it would somehow come back… i’d hit bottom again.”

But what did he mean by “getting left out” of the Newsom win? Apparently he thought he’d be getting a job in exchange for his efforts, but that never happened. Political consultant Johnny K. Wang, who worked on the Newsom campaign with Chamberlain, filled us in on the details of working alongside Chamberlain during Newsom’s first mayoral bid.

“We started off working for free,” Wang said. “Then we worked seven days a week, day and night, with extremely low pay. We gave it our all. The people in the campaign became like brothers and sisters, because they practically lived together. The understanding was, in return, you’ll take care of us because we are good workers and we have proven our loyalty.” Instead, Wang said, “We were burned by the campaign,” an outcome that he said Chamberlain was particularly upset about at the time.

Yet Wang insisted that in more recent history, Chamberlain had been acting normal and exhibited “zero signs” that he was capable of domestic terrorism.

Perhaps Chamberlain ran afoul of Newsom due to an incident from 2003. In a post on local news site Fog City Journal, progressive H. Brown wrote of an incident during Newsom’s run for reelection against green party candidate Matt Gonzalez, in which Chamberlain allegedly “worked the Internet” to falsely claim green party activists were being bussed in from out-of-state, arriving in the middle of the night, to bolster the ranks against Newsom.

Brown claimed there were no such activists being bussed in, and that the politically embarrassing incident got Chamberlain “fired,” but the Guardian has not independently confirmed that account.

In fact, many details of the FBI’s targeting and pursuit of Chamberlain are still sketchy.

The FBI alleged that he possessed explosives, but would not elaborate on what type of explosives agents claimed to have found in his home. Another unanswered question: How did the FBI come to the conclusion Chamberlain was a suspect in the first place? Was Chamberlain digitally surveilled, as he hinted in his online post?

“The whole thing is weird,” Wang said. “None of the FBI’s stories make sense. First he’s a domestic terrorist, then he’s made no threats to anyone. What do they know for sure? I’m assuming they know something, because you don’t start a raid and a national manhunt without some facts.”

A Twitter update sent by Chamberlain after the news broke of the manhunt.

There are many unknowns, but we do know from Chamberlain’s note that his political losses weighed heavily on him. One such loss was in 2006, when he helped run the group SFSOS, which politically battled San Francisco progressives. The group aided Rob Black, then a candidate for District 6, in a campaign against progressive Chris Daly, who prevailed in that race.

“As Chamberlain speaks, he gets more inflamed about Chris Daly,” FCJ wrote. “Clearly, he believes in the work he’s doing.”

In fact, Chamberlain was so impassioned against Daly that as part of his consulting work, he wrote a free e-book called The Case Against Chris Daly.

Daly, it should be noted, holds no grudges.

“In terms of whats been going on,” he told us, “I’ve felt a bizarre mix of vindication and pity.”

But by San Francisco standards, Chamberlain was a far right “Marina moderate.” He was far from a lefty liberal.

“There are some folks on the internet trying to malign the guy as a San Francisco leftist,” Daly told us. “I mean, the guy isn’t.”

In Chamberlain’s letter, he wrote of making progress with what he described as feeling “dark.”

“I was still fighting,” he wrote in the apology note to friends. “One day at a time, I was pushing through…Today was going to be a good day. I got great friends…. But so much was broken from this past year-and-a-half, and from moments way back before that, I guess it was just insurmountable, and the time’s up.

Below we’ve embedded “The Case Against Chris Daly,” written by Ryan Chamberlain, to give a hint at his political history.

The Case Against Daly by FitztheReporter