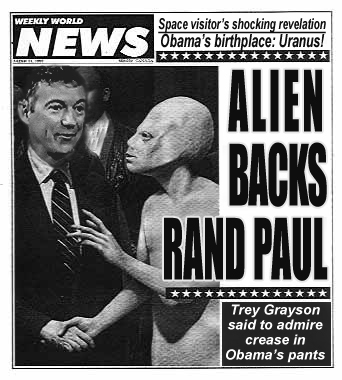 Controversy is swirling over Rand Paul’s doctrinaire libertarian take on the civil rights legislation of the 1960s. But this is not the first time the Kentucky Republican’s campaign has hit a bump in racially sensitive territory.

In December, Chris Hightower, the spokesman for Paul’s senate campaign, was forced to resign after a liberal Kentucky blog discovered that his MySpace page had a comment posted around Martin Luther King Day that read: “HAPPY N***ER DAY!!!” above what appears to be a historical photo of the lynching of a black man.

The photo and comment appeared to have been posted to Hightower’s MySpace page by a friend, not by Hightower himself. The comment has since been removed but at the time it was discovered by the local blog it had been up for nearly two years.

According to the Barefoot and Progressive blog, Hightower, who was also the frontman of a local Megadeth-style metal band called Commander, wrote a MySpace post referring to “Afro-Americans” titled “Blacks don’t like my Napalm Death hoodie”:

So, I was in Rivergate Mall today in line to get some pizza and I noticed a group of Afro-Americans were looking at me with hate and whispering stuff. I was wondering WTF and procceeded to sit facing them and give them the “what the fuck are you looking at look”. Anyway after a few snarls they quit looking at me. I was like do these fuckers think I am someone else or what? Anyway I finished my food and went to find some new shoes. About 10 minutes later, another group of Afro-Americans are giving me the same looks, it then dawns on me, there has to be something on this hoodie that is pissing off the Afro-Americans. And sure enough when I get outside the mall I look and bingo. KKK …. LOL!”

In a statement at the time of Hightower’s resignation in December, the Paul campaign said:

“The images were not placed there by this employee but by someone posting on the site. These images in no way represent Dr. Paul or his campaign nor do they represent the beliefs of this staff member. These images are reprehensible and have no place in civil discourse.”

And Paul himself said:

“I have never heard a single utterance of racism from this staffer nor do I believe him to have any racist tendencies. However, it is impossible to present the ideas and reforms we need in this country with this controversy present. Therefore I have accepted his resignation.”