Civil Rights » Rand Paul is not a Board-Certified Eye Doctor

Rand Paul is not a Board-Certified Eye Doctor

Recall Paul's statement last week concerning private businesses and the country's discrimination laws - racial exclusion was okay by him because he's a fundamentalist "libertarian." But now Paul, grasping at straws to defend himself, throws his "libertarian principles" out the window:

" ... I don't think that some people should recertify and others shouldn't," he said. "And I don't choose to give my money to a private group that discriminates. ... "

Observation: Rand Paul is a "flip-flopper" whose far-right views on civil rights change with the weather (and political convenience). Clearly, the ABO does not practice age discrimination, and Paul is merely blowing smoke at the fact that he is not an ABO-certified opthamologist. 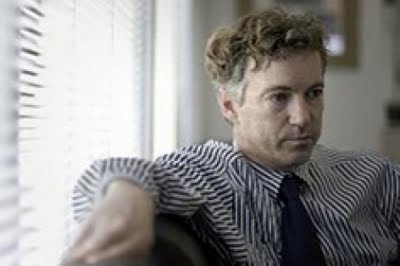 LOUISVILLE, Ky. — Rand Paul, who touts his career as a Kentucky eye doctor as part of his outsider credentials in his campaign for U.S. Senate, isn't certified by his profession's leading group. He tried Monday to bat away questions about it by calling it an attack on his livelihood, saying the scrutiny stems from his challenge of a powerful medical group over a certification policy he thought was unfair.

The libertarian-leaning Republican helped create a rival certification group more than a decade ago. He said the group has since recertified several hundred ophthalmologists, despite not being recognized the American Board of Medical Specialties – the governing group for two dozen medical specialty boards.

Questions about Paul's certification as an eye surgeon first arose in a story published Sunday in The Courier-Journal of Louisville.

Paul, who is continuing to practice in Bowling Green during the campaign, chafed Monday at questions about his certification.

"It's a personal assault on my ability to make a living," Paul told The Associated Press in a telephone interview.

Paul, whose father, Ron Paul, is a Texas congressman and former presidential candidate, said he is a good physician with thousands of patients. Paul casts himself as a political outsider spent years building his medical practice in Bowling Green before making his first run for elective office.

By focusing on an internal struggle within his profession, he said, "you vilify me and make it out to sound, 'Oh, ... there's something wrong with him as a physician because he chose not to register" with the American Board of Ophthalmology.

Paul said he helped formed the rival group because the established organization exempted older ophthalmologists from recertification. He likened it to members of Congress passing laws that don't apply to themselves.

The campaign for his Democratic rival, Kentucky Attorney General Jack Conway, said the episode raises serious questions about Paul's character. Conway's campaign said it shows Paul doesn't want to be held to the same standards as other doctors.

"It is clear that Rand Paul does not think the rules apply to him," Conway campaign manager Jonathan Drobis said in a statement Monday.

Paul, a graduate of Duke University's medical school, said he was board certified under the American Board of Ophthalmology for a decade. Paul has been licensed to practice in Kentucky since 1993.

In the late 1990s, Paul was a driving force behind forming the National Board of Ophthalmology to protest the ABO's exemption policy.

"I don't think that some people should recertify and others shouldn't," he said. "And I don't choose to give my money to a private group that discriminates."

Paul has been certified through the National Board of Ophthalmology since 2005. He is listed as the group's president; his wife, Kelley, is listed as vice president; and his father-in-law is listed as secretary. Paul and his relatives receive no salaries from the organization, his campaign said.

Beth Ann Slembarski, administrator for the American Board of Ophthalmology, said less than 5 percent of the nation's practicing ophthalmologists aren't certified through her organization.

Slembarski said that certification through the ABO reflects "an extra commitment by physicians to demonstrate their knowledge and skills in this specialty."

Before 1992, ABO certification had no expiration, she said. After that, it started issuing certifications that lasted 10 years, but ophthalmologists certified before 1992 were grandfathered in, meaning they didn't have to be recertified.

Neither group has anything to do with medical licensure, which is handled by state boards.

Paul shrugged off his group's lack of recognition by the American Board of Medical Specialties.

"Do you think that they're going to recognize a competitor?" he said.