” … It’s hard to overstate Phillips’ influence in the transformation of the more secular mid-century conservatism of Barry Goldwater and William F. Buckley into today’s religiously-inflected conservatism. In the 1980s Phillips played an important role in the Reagan Revolution as President of the Conservative Caucus, founding member of the Council for National Policy (CNP) and a as a Senior Editor at the Conservative Digest. … “

Howard Phillips, the founder of the Conservative Caucus and the Constitution Party, three-time presidential candidate and founding father of the religious right, has died. Following a diagnosis of Frontotemporal Dementia (FTD) and Alzheimers Disease his health had deteriorated rapidly over the past couple of years, his son explained via Facebook.

As the story goes, Phillips, Paul Weyrich, and Richard Viguerie got together in the late 1970s using Viguerie’s groundbreaking direct mail company to help Jerry Falwell build the Moral Majority, and Paul and Judy Brown build the American Life League. While Weyrich, Vigerie and the Browns were Catholic, Falwell was a Baptist, and Phillips was an evangelical convert from Judaism with great affection for RJ Rushdoony and Christian Reconstructionist leanings.

It’s hard to overstate Phillips’ influence in the transformation of the more secular mid-century conservatism of Barry Goldwater and William F. Buckley into today’s religiously-inflected conservatism. In the 1980s Phillips played an important role in the Reagan Revolution as President of the Conservative Caucus, founding member of the Council for National Policy (CNP) and a as a Senior Editor at the Conservative Digest.

By the 1990s, finding the Republican party’s shift to the right inadequate, Phillips turned his efforts toward building a viable third party, founding the U.S. Taxpayers Alliance, then the United States Taxpayers Party—now known as The Constitution Party.

I interviewed Phillips in 2009 for my current book project. He described meeting Rushdoony in the 1970s and hearing what he thought was the best critique of “socialized medicine… entirely based on the Bible.” He attributes his conversion in part to Rushdoony and spent much time with him in the subsequent years. In 1996 at Rushdoony’s 80th birthday party, Phillips predicted that the architect of dominion theology would be the most influential man of the 21st century.

In an interview in 2011 Phillips told Andrea Schwartz of the Chalcedon Foundation that Rushdoony had been his “spiritual father with extraordinary influence on him and his family.” Christian Reconstructionists’ plans for dominion are multigenerational; families are encouraged to build dynasties with 200-year plans and to see their families as central to God’s plan for history.

In that 2009 interview Phillips told me about how he had raised his children on Rushdoony’s taped lectures, playing them in his car. While Phillips’ legacy will be far-reaching, it will be built, in part, by one of the sons who listened to those tapes: Doug Phillips, Home School leader and Biblical Patriarch, about whom much has been written here at RD.

When news of Phillips’ passing came Sunday morning, there was an announcement on Rushdoony’s Chalcedon blog and a small flurry on Twitter. R.C. Sproul Jr., who tweeted about Phillip’s passing, calling him a “hero, statesman, patriarch,” told RD about a conference held at his Highlands Study Center in 2006—“Generations: Giving Honor to Whom Honor is Due”— which brought together the elder and younger Sprouls and Phillips clan. It was moving “to see the bond between them,” he said, explaining how very much alike the two men were.

Texas Representative Steve Stockman (R-TX), recently known for his recent campaign bumper sticker “if babies had guns they wouldn’t be aborted,” tweeted Friday asking for prayers for Phillips and his family.

Julie Ingersoll is Associate Professor of Religious Studies at the University of North Florida. She is the author of Evangelical Christian Women: War Stories in the Gender Battles and is currently writing a book on the influence of Christian Reconstructionism. 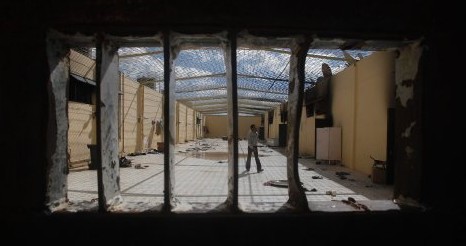