"... Most of the CIA’s recruitment of foreign spies now takes place in the United States. Hundreds of CIA officers working out of cover offices and companies in areas where foreign students and scientists abound -- such as Boston, Los Angeles, Silicon Valley and the like -- try to make contact with their marks and send them back home as spies. ..." 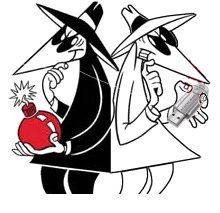 People upset about the CIA’s involvement in domestic interrogations might be surprised to learn that the spy agency’s most explosive growth in recent years has been right here in the USA -- not in the back alleys of Karachi or in the mountains of Afghanistan.

According to some insider estimates, most of the CIA’s recruitment of foreign spies now takes place in the United States. Hundreds of CIA officers working out of cover offices and companies in areas where foreign students and scientists abound -- such as Boston, Los Angeles, Silicon Valley and the like -- try to make contact with their marks and send them back home as spies.

Advocates say it’s a lot easier, and safer, than trying to recruit agents in places like China, under the scrutiny of Beijing’s secret police and counterspy service, not to mention in places like the Middle East and Pakistan.

But the strategy has its critics, too, especially former CIA operations officers who say the spy agency is playing it too safe -- and not delivering the goods to U.S. commanders who need strong intelligence in places like Afghanistan and Pakistan.

"In response to criticism that more than 90 percent of its officers live and work entirely within the United States, and that the remainder work within American embassies, the CIA periodically promises to get more officers under cover, on the street, in foreign countries," a former CIA officer who uses the pseudonym Ishmael Jones told me in April.

But it doesn’t, he maintains.

“Get the CIA's clandestine officers out of the United States and move them to assignments in foreign countries, as required by the CIA's charter,” he argued last year in The Atlantic online.

“Move more CIA officers outside the diplomatic/embassy system,” he added. “Congress has directed this and has been providing massive funding for years, but the CIA has not complied. Establish strict accounting and audit procedures for federal funds, as is already required by law.”

We were moved to bring this up by an apparent kerfuffle set off by an AP report that noted the CIA’s participation in the new High Value Interrogation Group, kind of a multiagency flying squad for domestic terrorism cases.

“The senior administration officials insist the group can legally be used to question U.S. citizens or foreigners — and that includes the participation of CIA agents,” wrote the AP’s Kimberly Dozier. “But one added that an effort would be made to keep the CIA agents out of the interrogation process inside the U.S. to avoid having defense attorneys call them into court.”

That, in turn, generated a headline on Josh Gerstein’s Politico blog, “CIA sees no legal bar to joining U.S. interrogations,” based on a conference call with an official who spoke only on the basis of anonymity.

The official “seemed eager to rebut the conventional wisdom that the CIA cannot legally engage in any operational activities in the U.S.,” Gerstein wrote.

That would be the "conventional wisdom," yes, and how wrong it is.

In the telling, you’d think the CIA’s domestic operations were pretty limited to listening outside the interrogation room as FBI agents questioned suspects like Faisal Shahzad, scrupulously observing the legal prohibitions against CIA operations here.

Which is not to point a finger at Gerstein or Dozier, of course.

Indeed, a former CIA official hinted at reality by telling Gerstein that "the more meaningful distinction [in what the CIA can do at home] involved not U.S. soil but whether the suspect is a U.S. person [a U.S. citizen or permanent resident]."

Any more than that, however, the CIA is very, very reluctant to own up to.

As for the statement by Jones, a deep-cover operative for 18 years, about the large bulk of CIA assignments being made at home, agency spokesman George Little says, “That’s not true.”

How do you trust trained liars? Corroborate before acting on information. What if we had waited on results of full competent investigation of 9/11 before charging into the middle east for all the wrong reasons? We now know that Bush and friends did it and blamed their enemies the way nazis have always done.