" ... The newsletter published by Paul's secret society had an anti-Christian tone ... " 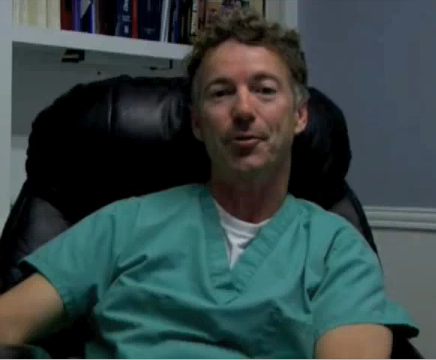 I've obtained several letters and Op eds that Rand Paul wrote to his school newspaper in the early 1980s, and they provide a glimpse into Paul's budding libertarian mind as he grappled with his early hostility towards government.

In the letters, Paul questioned whether government should have any role in combatting discrimination and bigotry -- something that will surely resonate with his latter-day questioning of the Civil Rights Act -- and wrote worshipfully about Ayn Rand. He also cast doubt on whether government should, or can, define or try to achieve gender equality in the workplace, even as he suggested such equality is a worthy goal. And he showed hostility to government efforts to force companies to be consumer-friendly.

The letters, which are all right here, don't contain anything terribly damaging, but they do suggest Paul's antipathy towards government has been something he's nursed since college years. However, they also show that he wrestled with questions about politics and government at an early age, and opposed discrimination in any form, even if he was ambivalent about whether goverment should do anything to stop it.

In a 1983 letter about the Equal Rights Amendment to The Lariat, the paper at Baylor University, Paul wondered whether government should pass any laws to combat discrimination:

Should we enact laws that say "Thou shall not be prejudiced in business transactions," and then hope that the courts interpret such laws in a rational manner? Or should moral questions such as discrimination remain with the individual? Should we preach in order to bring about change, or should we compel?

In that same letter, Paul also offered a rebuttal to a professor who had argued for equality of wages regardless of gender:

Equality? Since when have any two people ever been equal?...

Have you some magical equation to determine equality in work? The answer must of necessity be a resounding "no!" Equality is a thing of the mind, originated, conceived and promulgated on a subjective basis.

However, Paul made it clear that he opposes discrimination in any form, arguing that "all must agree that bigoted discrimination is detrimental to the peaceful interaction of different sexes and races in the marketplace." And he held out hope for the advancement of women, but through "voluntary cooperation."

"Women inhabit virtually every sphere of our economic lives without the ERA," Paul wrote. "Change comes slowly, but it does come."

Paul spokesman Jesse Benton chalked up the letters to Dem desperation. "It is sad that Democrats are so desperate to prop up Jack Conway's failing campaign that they are digging up 30 year old College Op-Eds," he said. "This race is about repealing Obamacare, preventing tax hikes and fighting out of control debt and spending by Conway's liberal allies in Washington."

In a 1982 Op ed Paul published in the same paper, he wrote worshipfully about the "immortal words" of Howard Roark, the hero of Ayn Rand's novel "The Fountainhead." Displaying a taste for ambitious prose that betrayed his tender years, he lamented that "man" had lost touch with the Roark-ian ideal, and decried rank and file human beings as a "mindless mob of mediocrity" that hates and tries to stymie the achievements of great men:

The new world man crawls on all fours, submits, acquiesces and seeks the security of the mindless mob of mediocrity.

Such are the masses that cower before knowledge, that condemn science, and seek to become one with the inanimate earth. This subspecie of man rises from among us, consolidated in their hatred of achievement, and their fear of the unknown...Their defeat, however, is still possible if the few who still possess originality, those men who still dare to think, speak out and show the mob the reflection of their premises, the impotence of the conclusions, and the lifelessness of their entire ideology.

In a 1983 letter to the paper, Paul showed hostility to the idea that government should try to compel private companies to be more consumer-friendly. He claimed companies should not be compelled to disclose to consumers ways of saving money with their products.

"The implied conclusion" of that idea, Paul wrote, "is that the consumer does not possess the means nor the intelligence for securing his own savings; therefore, the ever-benevolent government should provide for the incompetency of the consumer."

Paul's letters are coming to light as Politico reports that the newsletter published by Paul's secret society had an anti-Christian tone and made fun of the faith orientation of Baylor, a Baptist college. Taken all together, the revelations provide an interesting glimpse into the non-comformist and intellectually restless milieu of his college years, suggesting his current libertarianism and hostility towards government and convention go back a long way.

Salon: Rand Paul Cozies Up to the Neocons