UnderpantsGate Why is there a Media Blackout of the Flight 253 Congressional Hearings?

Related: "UNDERPANTSGATE - Covert Op & Cover-Up: Big Oil, the CIA and the Attempted Bombing of Flight 253 as Justification for Military Operations in Yemen & Nigeria" 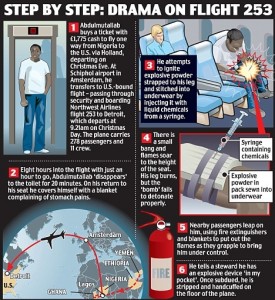 " ... The hearing was reported in a brief January 27 article in the Detroit News, headlined, 'Terror Suspect Kept Visa to Avoid Tipping Off Larger Investigation.' The News wrote: 'The State Department didn’t revoke the visa of foiled terrorism suspect Umar Farouk Abdulmutallab because federal counterterrorism officials had begged off revocation, a top State Department official revealed Wednesday.' This article, published by one of the leading newspapers covering the aftermath of Flight 253, has not been challenged or retracted. Instead, it has been ignored. ... ”

Why the media silence on the Flight 253 bombing hearings?

The media’s failure to report the January 27 Congressional hearings on last Christmas’s Flight 253 bomb plot is both extraordinary and ominous. The hearings made the explosive revelation that US intelligence agencies acted to help the bomber, Umar Farouk Abdulmutallab, gain access to the plane. ...

President Obama, congressmen and the media absurdly claimed that US intelligence had not stopped the attack because it failed to “connect the dots” between such pieces of information and realize that Abdulmutallab in fact could pose a threat.

The January 27 hearing went even further in exploding the official explanation given by the government and media. (See “Congressional hearing reveals US intelligence agencies shielded Flight 253 bomber” ).

Under questioning about US visa policy, State Department Under-Secretary Patrick Kennedy said: “We will revoke the visa of any individual who is a threat to the United States, but we do take one preliminary step. We ask our law enforcement and intelligence community partners, ‘Do you have eyes on this person and do you want us to let this person proceed under your surveillance so that you may potentially break a larger plot?’ ... And one of the members [of the intelligence community]—and we’d be glad to give you that out of—in private—said, ‘Please, do not revoke this visa. We have eyes on this person.’”

This unnamed US agency endangered the lives of hundreds of passengers, and more potential victims of flying debris on the ground. All three officials testifying—Kennedy, National Counter-Terrorism Center Director Michael Leiter, and Department of Homeland Security Deputy Director Jane Lute—said their agencies would take no disciplinary action over the Flight 253 events.

This article, published by one of the leading newspapers covering the aftermath of Flight 253, has not been challenged or retracted. Instead, it has been ignored. While there have been Congressional hearings involving leading figures in the US intelligence apparatus since January 27, Kennedy’s statements have not been raised in questioning. 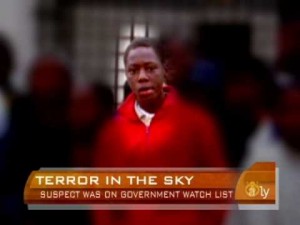 Why is the media still saying nothing about the hearings?

Major press covered Congressional hearings on the Flight 253 attack extensively as they began. The New York Times ran a sympathetic January 16 article on Leiter—“For Antiterror Chief, a Rough Week Ahead as Hearings Begin”—praising him as “extremely bright.” It suggested Leiter’s agency struggled to keep track of different watch list systems.

On January 20, Washington news web site Talking Points Memo wrote: “As three separate Senate committees today hold hearings on the failed Christmas attack over Detroit, watch for Republicans to take the opportunity to ramp up their criticism of the Obama Administration.”

In fact, the Republican Party has been conspicuously silent since. Immediately after the bombing, former Vice President Dick Cheney attacked the Obama administration and nearly accused it of treason: “We are at war, and when President Obama pretends we aren’t, it makes us less safe.” However, after it became clear that US intelligence agencies were involved, Cheney has made no public criticisms of the White House’s handling of the issue.

The blackout is a devastating exposure of the state of US politics. If events do not fit the concocted “connect-the-dots” script, the political establishment treats them, in Orwellian style, as if they had never happened. This, in turn, further strengthens the power of the national-security apparatus inside the state, as it learns that it can plan operations risking mass deaths with impunity.

Washington proceeds in this manner to advance fundamental state interests: in protecting the “connect-the-dots” lie, it is trying to shield the credibility of the entire so-called “war on terror.”

This “war” relied on the claim that the only defense against a new September 11-type attack was giving the US national security apparatus carte blanche for an unpopular policy of preemptive wars, domestic spying, and other attacks on democratic rights. In earlier times, intelligence agencies had been known as the “department of dirty tricks.” However, US media treated their stunning lapses before September 11 as simply the product of honest mistakes or technical problems.

The Flight 253 hearings threatened to suggest the truth to masses of people: giving intelligence agencies free rein is extremely dangerous, both on the levels of personal security and of politics. This truth was, moreover, implicit in the US government’s unclear role in the September 11 events themselves.

In 2005, the New York Times published material on the Able Danger military intelligence unit. These revelations included confirmation of overseas reports that, as in Abdulmutallab’s case, the US had identified 9/11 operational leader Mohammed Atta before he entered the US on a visa in 2000. The World Socialist Web Site noted at the time: “How Atta was able to enter and re-enter the country on multiple occasions over the next year, enroll in flight school, and use credit cards and bank accounts in his real name, despite being a known Al Qaeda operative, has never been explained.”

Amid the toxic political atmosphere that swept the ruling class after September 11, 2001 and the invasion of Iraq, General Tommy Franks described in a November 2003 interview how he saw the security establishment’s response to another attack leading to military rule.

Franks said: “[It is] a terrorist, massive, casualty-producing event somewhere in the Western world—it may be in the United States of America—that causes our population to question our own Constitution and to begin to militarize our country in order to avoid a repeat of another mass, casualty-producing event. Which in fact, then begins to unravel the fabric of our Constitution. ... [T]he Western world, the free world, loses what it cherishes most, and that is freedom and liberty we’ve seen for a couple of hundred years in this grand experiment that we call democracy.”

Just the year before, the Bush administration had set up the Northern Command, to supervise military operations inside the US. In 2005, the Washington Post revealed that the US military was running so-called Vital Archer exercises involving US troops to “take charge” after a large-scale terrorist attack in the US.

In the days after the Flight 253 bombing, the World Socialist Web Site commented: “If this episode is to be examined seriously, the question must be asked: What would have happened had Northwest Flight 253 been destroyed? There is no question but that such a catastrophe would have had immense repercussions both internationally and within the United States. It would have seriously destabilized the Obama administration, politically strengthened the most extreme right-wing sections of the ruling class, and cleared the way for an even more massive expansion of military-intelligence operations overseas and a drastic curtailing of democratic rights at home.”

In keeping silent under such conditions, the mass media are helping to facilitate more anti-democratic plots.