By Tyler Whitley
Richmond Times-Dispatch | May 7, 2010 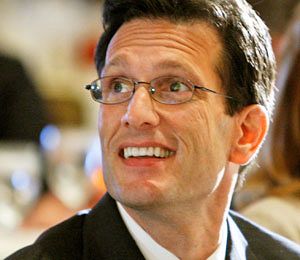 Rep. Eric Cantor, R-7th, has suspended his National Council for a New America in favor of a project to craft a legislative agenda for GOP candidates for Congress this fall.

Rep. Eric Cantor, R-7th, has pulled the plug on a national organization that was launched with much fanfare a year ago.

John Murray, a spokesman for Cantor, confirmed a report from the Washington newspaper Roll Call that Cantor’s National Council for a New America is “in a suspended state.”

Cantor plans to concentrate his efforts on another project designed to craft a legislative agenda for Republican candidates for Congress this fall, Murray said.

He blamed the demise of the council on “relentless” attacks from Democrats. The organization also was the target of an ethics complaint, filed by Citizens for Responsibility and Ethics in Washington, claiming Cantor’s office had violated House rules regarding funding for political organizations.

Murray said the complaint has been dismissed.

When the council was set up, Cantor said the plan was to hold town halls around the country to allow average Americans to state their views. Sen. John McCain, RAriz., said the council would be bipartisan. The council held just one townhall meeting. Cantor and two Republican former governors, Jeb Bush of Florida and Mitt Romney of Massachusetts, attended that session, May 2, 2009, at an Arlington County pizza parlor.

Cantor is the Republican whip, the No. 2 Republican in the House of Representatives. Murray said Cantor would concentrate his whip efforts on a “Commitment to America” project set up by the chief deputy minority whip, Rep. Kevin McCarthy, R-Calif. That project is soliciting opinions outside the Beltway to help form a legislative agenda, he said.

(Cantor’s wife, Diana F. Cantor, is a member of the board of directors of Media General Inc., parent company of the Richmond Times-Dispatch.)