"... Virginia's Attorney General Ken Cuccinelli has not issued an arrest warrant for the criminal Bobby Thompson---who also operates in Virginia and whose 'national headquarters' is a UPS mailbox in Washington D.C. I guess Attorney General Cuccinelli is too busy concocting fabricated fraud charges against the famous climate scientist Dr. Michael Mann to worry about apprehending real criminals who are defrauding Virginians. ..." 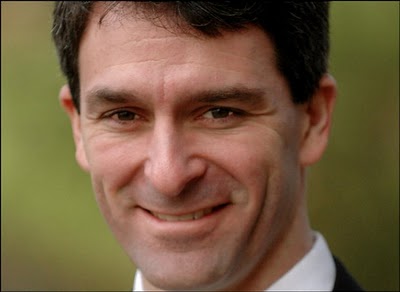 The Washington Post reported Cuccinelli's subpoena, issued to the University of Virginia and concerning the work of former university professor Michael Mann, was quashed by Judge Paul Peatross.

It was Mann who produced the widely publicized "hockey stick" graph showing a sharp increase in global average temperatures in the industrial age.

The prominent climate scientist worked at UVA from 1999-2005 and has since taught at Penn State University. His work was called into question in the investigations into the so-called Climategate scandal following the unauthorized release of hundreds of e-mails from a British climate center last fall.

However, several investigations, including an extensive review of his research by PSU, have cleared him of academic misconduct.

Peatross ruled this week that the attorney general can investigate whether fraud has occurred in university grants, but ruled that Cuccinelli's subpoena failed to state a "reason to believe" that Mann had committed fraud, according to the Post.

The Post calls the ruling "a major blow" for the attorney general, a known global warming skeptic who maintained he was investigating whether Mann committed fraud in seeking government money for research that showed the earth has experienced a rapid, recent warming.

Cuccinelli, a Republican, has already sued the federal Environmental Protection Agency to try to prevent it from imposing regulations on carbon dioxide and other climate-altering gases.

Cuccinelli suspects Mann may have violated the state's Fraud Against Taxpayers Act by manipulating data in applications for more than $450,000 in research grants.

Additionally, the judge said Cuccinelli could only ask about one of five grants issued to Mann that the attorney general has been seeking to investigate, the Post said. That's because the other four involved the use of federal, not state, funds.

In a statement, Cuccinelli said he will take the judge's ruling into account and rewrite the civil investigative demand, the Post reported.

From Legal Newsline: Reach Jessica Karmasek by e-mail at jessica@legalnewsline.com.

UPDATE: See the Ohio Attorney General's legal documents in the case of Bobby Thompson. Ohio's Attorney General Richard Cordray has issued a "John Doe" arrest warrant for identity theft. The founder of a Tampa-based charity known as the U.S. Navy Veterans Association, who called himself "Bobby Thompson" (above), stole another man's identity.

Virginia's Attorney General Ken Cuccinelli has not issued an arrest warrant for the criminal Bobby Thompson---who also operates in Virginia and whose "national headquarters" is a UPS mailbox in Washington D.C. I guess Attorney General Cuccinelli is too busy concocting fabricated fraud charges against the famous climate scientist Dr. Michael Mann to worry about apprehending real criminals who are defrauding Virginians.  And anyway, Virginia's Attorney General Ken Cuccinelli (above) took $55,000 dollars from "John Doe." I wonder why "John Doe" gave Cuccinelli all that money. [See all the articles about this bogus charity in the St. Petersburg Times' constantly updated investigative report, U.S. Navy Veterans Association: Under the radar.] Attorney General Cuccinelli persecutes the climate scientist Michael Mann with concocted fraud allegations, but why did a criminal give Cuccinelli $55,000 dollars?

Lt. Cmdr. Bobby Thompson, who founded the U.S. Navy Veterans Association in Tampa in 2002, isn't named Bobby Thompson after all, and now stands accused of stealing that name from an unsuspecting resident of Washington state.

What is the real name of the man who masqueraded as the director of a nationwide charity for a decade, and where is he now?

That's what Ohio Attorney General Richard Cordray was asking Thursday, as he announced that a nationwide arrest warrant for identity theft had been issued for the man who called himself Thompson but is listed now as a fugitive named "John Doe."

"Our investigators have determined that this individual stole the identity of someone else and used that as a centerpiece of an apparent scam that has continued for seven years and involved tens of millions of dollars,'' said Cordray. "We don't know who this individual is yet, but we do know that he is not Bobby Thompson."

Cordray said his office found evidence of the identity theft when investigators reviewed the registration record signed by Bobby Thompson to rent a UPS mailbox in Cincinnati for the Navy Veterans group in 2003.

The date of birth and the Social Security number on the rental agreement belonged to a Bobby Thompson in Bellingham, Wash., a man Cordray said "has absolutely no connection to the U.S. Navy Veterans Association."

The Attorney General's Office said it is circulating two pictures taken in Florida of the man who called himself "Commander Thompson" in hopes that someone will recognize him and turn him in. One photo is taken from a Florida ID card applied for in 2006. The other was snapped at a check presentation by the Navy Veterans to the Florida Sheriff's Youth Ranch in 2008.

"We don't know where this guy is,'' said Ted Hart, a spokesman for Cordray. "But if he's stopped, this warrant for his arrest will pop up."

The man who called himself Commander Thompson disappeared in late June, according to his attorneys, amid several state and federal investigations into the Navy Veterans and its claim that it gave millions to veterans, active-duty personnel and their families.

In Ohio, Cordray ordered fundraising by the Navy Veterans stopped, obtained restraining orders to halt use of its mailboxes and got court orders freezing the charity's bank accounts. Similar investigations are underway in Florida, New Mexico, Virginia, Oregon, Missouri, Hawaii and New Hampshire.Last week, federal investigators from the IRS and the Department of Veterans Affairs armed with a search warrant seized a computer and records from the Tampa home of two associates of the man who called himself Commander Thompson. The associates, Blanca Contreras and her daughter, Nancy Contreras, signed as officers of the Navy Veterans in the last four months.The state and federal investigations were sparked by a investigative series, Under the Radar, the St. Petersburg Times published in March. The newspaper tried to find the 85 officers listed on Navy Veterans' tax returns, as well as some evidence of a claimed membership of 66,000 and beneficial gifts in the tens of millions of dollars.The Times found just a single officer — the man who called himself Thompson. Forty-one Navy Veterans offices across the United States turned out to be mail drops. The membership consisted of a few helpers and some stand-ins recruited to pose for pictures on the Navy Veterans website.The Times has calculated that since the IRS granted the group tax-exempt status in 2002, the Navy Veterans national and state chapters have reported income to the IRS totaling $99.6 million.And the money, much of it collected from the public by telemarketers? It's unclear what happened to all the cash, but Cordray says some went to politicians.The Times found more than $200,000 in contributions listed in Bobby Thompson's name to local and national politicians, ranging from $500 to Hillsborough County Commissioner Kevin White to $10,000 to Minnesota congresswoman Michele Bachmann to $55,500 to Virginia Attorney General Ken Cuccinelli.

After one interview with "Commander Thompson" last August, the Times tried to verify his Navy service but could find no record that he had been in the military.

The explanation the commander offered: he said he'd "taken the identity of another" so he could enlist at age 15.

McCain Must do More to Distance Himself from Extremists