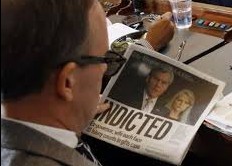 McDonnell is in “the fight of his life,” The Restoration Fund states in an email sent Thursday morning.

“The trial alone will cost approximately $500K for legal fees, housing, experts, transcripts etc.,” the e-mail states. “We need to insure that the legal team has the resources to prepare and defend Bob at trial.”

McDonnell and his wife, Maureen, were indicted Jan. 21 on charges that they violated federal corruption laws by using their positions to benefit Jonnie R. Williams Sr., then-CEO of Star Scientific, who showered them with more than $160,000 in gifts and loans.

The McDonnells have both pleaded not guilty, and the former governor has maintained that he did nothing illegal for Williams.

The night that he was indicted, the former governor said he will use “every available resource and advocate that I have for as long as it takes to fight and prevail against these false allegations and the unjust overreach of the federal government.”

That fight could get expensive.

Supporters are trying to raise money through the legal defense fund, which reported raising $11,554 between July 1 and Dec. 31, according to the Virginia Public Access Project, a nonpartisan tracker of money in state politics.

The greatest contribution to the Restoration Fund — $5,000 — came from Stanley Baldwin, a Virginia Beach lawyer who chairs the fund, according to VPAP.

“Our friend, Bob McDonnell, is in the fight of his life and he needs your help,” the e-mail sent Thursday says. “He has been strengthened and encouraged by many, many friends who have reached out to express support. Many of you have said you’d like to help however you can, and have asked for the best way to do that.”

It includes a link to contribute. According to the online contributions page, the fund has received more than $33,400 in donations in the last two weeks.

That includes, according to the site, $10,000 from Fred Malek, the Republican power broker who chaired McDonnell’s government reform panel, and $5,000 from Bobbie Kilberg, president and CEO of the Northern Virginia Technology Council and a co-chair of McDonnell’s 2009 transition team.

“Bob McDonnell is a close friend, was an outstanding, pro-business governor and deserves a robust defense,” Kilberg said.

The contributions page also shows a $15,000 donation from James Cheng, who served as Secretary of Commerce and Trade in the governor’s administration. Cheng on Thursday called McDonnell “a great leader and a great boss.”

“He deserves our support,” he said.