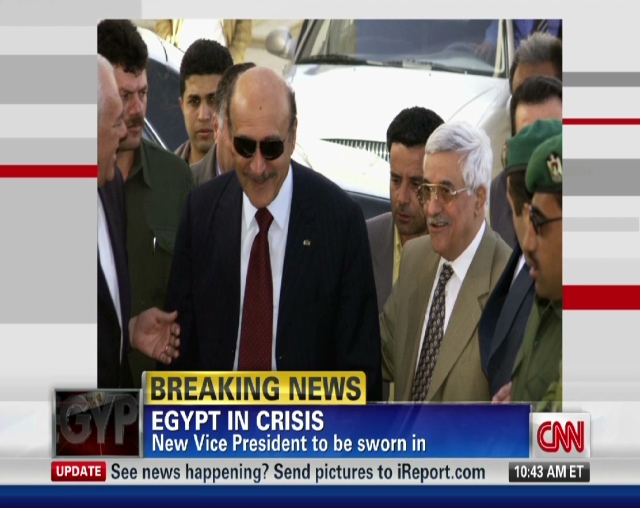 THE man named by President Hosni Mubarak as his first ever deputy, spy chief Omar Suleiman, reportedly orchestrated the brutal interrogation of terror suspects abducted by the CIA in its secret "extraordinary rendition" program.

Mr Suleiman has carried out sensitive truce negotiations with Israel and the Palestinians as well as talks among rival Palestinian factions, winning the praise of American diplomats. For US intelligence officials, he has been a trusted partner willing to pursue Islamist militants without hesitation, targeting homegrown radical groups Gamaa Islamiya and Jihad after they carried out a string of attacks on foreigners.

He was also "the CIA's point man in Egypt for rendition - the covert program in which the CIA snatched terror suspects from around the world and returned them to Egypt and elsewhere for interrogation, often under brutal circumstances", according to Jane Mayer in a profile for The New Yorker. "Technically, US law required the CIA to seek 'assurances' from Egypt that rendered suspects wouldn't face torture," Mayer writes. "But under Suleiman's reign at the intelligence service, such assurances were considered close to worthless."

Mayer is the author of The Dark Side: The Inside Story of How the War on Terror Turned Into a War on American Ideals.

A product of the US-Egyptian relationship, Mr Suleiman underwent training in the 1980s at the John F. Kennedy Special Warfare School and Centre at Fort Bragg in North Carolina.

After taking over as spy director, Mr Suleiman oversaw an agreement with the US in 1995 that allowed for suspected militants to be secretly transferred to Egypt for questioning, according to the book Ghost Plane by journalist Stephen Grey. In the run-up to the US invasion of Iraq in 2003, the CIA relied on Mr Suleiman to accept the transfer of a detainee known as Ibn Sheikh al-Libi, who US officials hoped could prove a link between Iraq's Saddam Hussein and al-Qa'ida.

The suspect was bound and blindfolded and flown to Cairo, where he was locked in a cage for hours and beaten, according to The One Percent Doctrine by Ron Suskind, until he told his interrogators that the Iraqi regime was moving to provide terrorist group al-Qa'ida with biological and chemical weapons.

When then US secretary of state Colin Powell made the case for war before the UN, he referred to details of Libi's confession.

Omar Suleiman (Wikipedia) - Arabic: عمر سليمان‎; born July 2, 1936 - is an Egyptian politician and military figure who was appointed Vice President of Egypt on January 29, 2011. Previously, he was Minister without Portfolio and Director of the Egyptian General Intelligence Directorate (EGID), the national intelligence agency, from 1993 to 2011. In his role as Director of EGID, the British Daily Telegraph dubbed him as "one of the world's most powerful spy chiefs". Foreign Policy magazine ranked him the Middle East's most powerful intelligence chief, ahead of Mossad chief Meir Dagan.[3][4]

Suleiman was born in Qena in Southern Egypt. He left Qena for Cairo in 1954, at the age of nineteen, to enroll in Egypt's prestigious Military Academy. He received additional military training in the former Soviet Union at Moscow's Frunze Military Academy. He is known to have participated both the Six-Day and Yom Kippur Wars.[2] In the mid-1980's he later earned additional degrees: a bachelors and a master degree in Political Science from Ain Shams and Cairo Universities. Suleiman was transferred to military intelligence and, fluent in English,[5] he began what was to be a long relationship between Egypt and the United States.

Suleiman became the director of military intelligence in 1991. In 1993, he became the chief of the Egyptian General Intelligence Service (EGIS). In 1995, it is said that he insisted that President Mubarak ride in an armored car during a visit to Ethiopia. A would-be assassin fired on the vehicle, but Mubarak escaped without injury due to the added precautions.[6] His name has become known only in recent years, breaking the tradition of keeping the name of the Egyptian head of Intelligence a secret known only to top government officials. It was released in the media around 2000.

Suleiman has acquired a more public profile while trying to broker a deal between the different armed Palestinian groups vying for power in Gaza as the top presidential envoy from President Hosni Mubarak as well as brokering deals or truces between the Palestinians and Israel. His perceived role in negotiations between Palestinian groups gave him the image of an effective behind-the-scenes figure in the Egyptian government as well as identifying him as potentially useful to foreign governments such those of the Arab countries, Israel, the Palestinians and the United States.

Suleiman has been implicated as directly involved in the controversial CIA "rendition" program.[5][7] Journalist Stephen Grey in his work, "Ghost Plane", states that after taking over as intelligence director, Suleiman oversaw an agreement with the US in 1995 that allowed for suspected militants to be secretly transferred to Egypt for questioning.[8] Although Suleiman's Egyptian Intelligence was required to provide "assurances" that prisoners handed over through this program would not be subjected to torture, at least one CIA officer has testified that such assurances from them were unofficially regarded as worthless as "a bucket of warm spit".[5]

He has been accused of complicity in torture of Al-Qaeda suspects in Egypt.[9] Particularly, the case of Ibn al-Shaykh al-Libi who was captured and handed over to Suleiman. The information al-Libi gave under torture was cited by US officials in the run-up to the 2003 invasion of Iraq as evidence of a connection between Saddam Hussein and al-Qaeda. Al-Libi later recanted his confession.[8]

Political role and accession to the vice presidency

Suleiman is seen as a very close and trusted ally of President Mubarak, sharing many of his views on key issues such as Iran, Egyptian relations with Israel and the United States, and treatment of the Muslim Brotherhood.[6] Although he was a military man who by law is not a member of Mubarak's National Democratic Party, he preferred suits to military uniforms and is seen as a major link between Egyptian political and military elites.[6] Due to his role in the regional political scene and the lack of an alternative candidate acceptable to Hosni Mubarak, some have speculated that Suleiman will succeed Mubarak as President. In particular, he is seen as the choice of the Egyptian military establishment.[6] On January 29, 2011, he was named Vice President of Egypt during the civil unrest,[10] ending a vacancy in the position that lasted almost 30 years.