J.D. Salinger's Daughter Saw Him Cry Only Once – The Day John Kennedy was Murdered 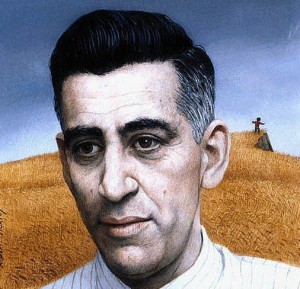 … When in the Amherst speech Kennedy refers to the artist as a “solitary figure,” who has, quoting Frost, “a lover’s quarrel with the world,” and who, “in pursuing his perceptions of reality … must often sail against the currents of his time,” I thought of Hawes again, but, even more, the words conjured up the artist whose biography I wrote about last week. In November 1963 J.D. Salinger was just beginning the “lover’s quarrel with the world” that would lead to his long, silent, self-imposed exile. The spring before the assassination, he had been invited to the White House for a party to honor American writers and artists. According to his daughter Margaret’s memoir Dream Catcher, he “almost went, such were my father’s feelings for President Kennedy.” When Salinger hesitated, Jackie Kennedy called him up to ask him personally, but to no avail. He stayed home, and on November 24, 1963, like most of his fellow countrymen, he was in front of the television, described by his daughter “with tears rolling silently down his cheeks as he sat and stared. The only time I have ever seen my father cry in my whole life was the day he watched JFK’s funeral procession on television.”