Q: Is Ray Davis actually a “diplomat,” as the  Obama administration claims? See: Daily Mail Post (India), 2-9-11:  ” … The equipment and weapons [Davis] was carrying leave no doubt that he was engaged in illegal and dubious undercover activities. … His arrest is a warning and a shot over the bow to other mercenaries. … “ 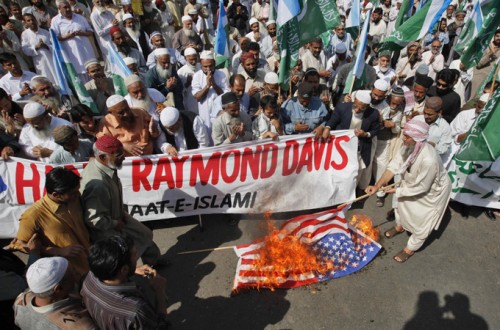 Double murder-accused US official Raymond Davis has been found in possession of top-secret CIA documents, which point to him or the feared American Task Force 373 (TF373) operating in the region, providing Al-Qaeda terrorists with “nuclear fissile material” and “biological agents,” according to a report.

Russia’s Foreign Intelligence Service (SVR) is warning that the situation on the sub-continent has turned “grave” as it appears that open warfare is about to break out between Pakistan and the United States, The European Union Times reports.

The SVR warned in its report that the apprehension of 36-year-old Davis, who shot dead two Pakistani men in Lahore last month, had fuelled this crisis.

According to the report, the combat skills exhibited by Davis, along with documentation taken from him after his arrest, prove that he is a member of US’ TF373 black operations unit currently operating in the Afghan War Theatre and Pakistan’s tribal areas, the paper said.

While the US insists that Davis is one of their diplomats, and the two men he killed were robbers, Pakistan says that the duo were ISI agents sent to follow him after it was discovered that he had been making contact with al Qaeda, after his cell phone was tracked to the Waziristan tribal area bordering Afghanistan, the paper said.

The most ominous point in this SVR report is “Pakistan’s ISI stating that top-secret CIA documents found in Davis’s possession point to his, and/or TF373, providing to al Qaeda terrorists “nuclear fissile material” and “biological agents”, which they claim are to be used against the United States itself in order to ignite an all-out war in order to re-establish the West’s hegemony over a global economy that it warned is just months away from collapse,” the paper added. (ANI)