Manufacturing ‘Terrorists’ / Terrors of the ‘War on Terror’ (Books Reviewed)

" ... What combines both the books essentially—the role of informers in the entrapment. How security agencies uses networks of informers to entrap the innocents and manufacture ‘terrorists’ ... " 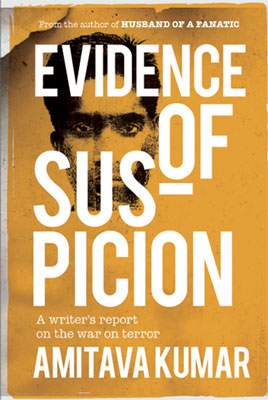 In 1958, while passing a judgment in the case of Sherman v. United States, the United States’ Supreme Court famously said, “the function of law enforcement is the prevention of crime and the apprehension of criminals. Manifestly, that function does not include the manufacturing of crime”. But it seems, even after more than half a century down the line, the law enforcement agencies—the FBI & Company not only consider manufacturing crime (read terrorists) as its most important ‘function’ but practice it with same zeal and passion especially in the name of ‘war on terror’.

The two books—Rounded Up: Artificial Terrorists and Muslim Entrapment After 9/11 by Shamshad Ahmad and Evidence of Suspicion: A writer’s report on the war on terror by Amitava Kumar; under the review are illustrative examples of the same. The books profiles and documents two different case each, of entrapment, racial profiling, communal witch-hunt and creating artificial terrorists in the name fighting terror primary by United States of America especially in the wake of triadic events of September 11, 2001 and by its allies including our country India. Amitava Kumar is an author of global fame and various books including the famous one Husband of a Fanatic.

He is currently teaching literature of 9/11 at Vassar College of New Work State, USA. Shamshad Ahmad is founder and President of the As-Salam mosque, Albany. He is teaching Physics at the University at Albany/ State University of New Work. His book is about entrapment of two of his mosque members (including Imam).

Both the books details about two interesting but ridiculous cases—one in India, in the city of Mumbai another in USA, in the city of Albany of ‘terrorists’ are made. It might come to you as surprise but reality is that- the modus operandi is almost same. Let’s take India first, Amitava Kumar in his book talks about Iqbal Haspatel, who had been falsely arrested on the charges on terrorism a month after the Bombay bombings in 1993. The charges against him were that, twenty five projectiles and seventeen pipe bombs and ammunition were recovered from his room. About which four days later recovered, the ‘projectiles’ found were actually parts of textile machinery and were called bobbins or twists-blockers. (p.2) Like Amitava, Shamshad too have a story—the story of ‘Commander’, Yassin Aref. Aref Hussain was arrested 5th August 2004 on the charges of having terror connections. Shamshad details about an incident of ‘mistranslation’ by FBI in Aref case, to prove that, the person they have caught is the ‘Commander’ of a terror outfit in Iraq and is serious threat to the country. The ‘proof’ they had, his name and original Albany address and telephone number were found in notebook discovered in a terrorist camp in Rawah, northern Iraq. And in that note book he was referred to as Commander. (p.55) But later it was found that, the translation was wrong. The details written in Kurdish but ‘mistaken’ as Arabic by FBI translators and ‘mistranslation’! It’s important note that, in both the cases due—both Iqbal and Aref was victimised.

While Iqbal was brutally tortured, Aref was denied bail. 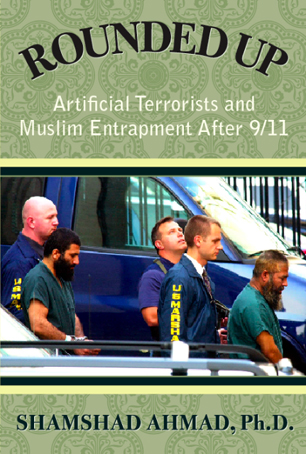 One of the important aspects of the so-called war against terror these books discusses is the creating bogus familiarity between terrorists and common man. Amitava gives example of a common poster—Have you seen this Man?, which call out to us from the walls of our cities. If you have seen this man, please contact the police. He might be armed and is dangerous. The writer is surprised by the description of the Man— Wears pant and T-shirts. Hence, “As a writer, I wonder whether in a novel, the poster would have said something like, ‘Likes Hindi films and perfume’,” he notes. (P.14)

He further notes, “Given that familiarity with terrorists is really only based on his (and, on rare occasion, her) appearance on the screen, it makes sense to ask what we can learn from the way in which that representation works. For the past two decade and a half, Hindi films like Roja, Mission Kashmir, Sarfarosh, Jaal, Maachis, Dil Se, Maa Tujhe Salaam, The Hero…have been trying to save the Indian nation-state from terrorists. Over and over again. Hidden in the stories proffered by the films is the claim that they are giving the terrorists a human face. So that we understand. In the more tolerable of these productions, empathy is doled out in equal, democratic measure by film-makers in a situation that is essentially undemocratic and brutal.” (p. 15)

Shamshad Ahmad in his book recollects his memories about the role of media just after the arrest of Yassin Aref and Mohammed Hossain on 5th August 2004 and notes, “I jumped from one channel to the other and from one radio station to the other. The news flashes were short, sharp and tense bur frequent and frightening.” (p.33)

He further recalls, “In the morning, I heard a radio talk show host blustering very loudly. ‘The FBI should be given credit,’ he said. ‘They’ve busted a case where these two guys were selling illegal licensees and running around with missiles shooting airplanes.’ A caller to the station, a very provoked elderly lady. demanded, ‘We should find out how many mosque members are state workers. They must be fired.’ I shivered. I was a state worker, teaching at a state university!” (p. 40)

Amitava in his book quotes a very interesting, sensible statement of a person called Abul Jalal, a poultry farmer from Walavati, suburb of Mumbai, which the author visited in 2006 to meet Iqbal. “When I was listening to Mubeen, a man leaned closer to me and, speaking in a confidential tone, said, What the Americans were doing in Abu Ghraib, they learned from our policemen here’. The man’s name was Abul Jalal.” (p. 4) “In a way, Jalal, a poultry farmer plus harmless fabricator of history, turn out to be right. Preempting later celebrated testimonies about the war on terror—for example, the Academy Award-winning documentary Taxi to the Dark Side, about an Afghani taxi driver Dilawar who was murdered in custody by American soldiers at the Bagram Air Base—Jalal had spoken to me about the global migration of torture. His judgment has come to the pass,” he concludes. (p.8)

What combines both the books essentially—the role of informers in the entrapment. How security agencies uses networks of informers to entrap the innocents and manufacture ‘terrorists’. While Amitava profiles two cases namely, of Henat Lakhani and Shawar Matin Siraj, Shamshad Ahmad profiles cases of Yassin Aref and Mohammad Hossain. All the four people are immigrants and come from either lower middle class or middle-middle class. Interestingly, informers are also immigrants, probably to gain confidence and entrap easily. What is very freighting such networks are also very in India, in fact as prevalent as in USA or elsewhere. And that I can assure you from my personal experiences and observation of different cases.

Though most of the incident, narration and stories are really unfortunate and heart rending in reading but both the books are extremely important. It invites not only think but question. It provides the bases for to be reluctant. It is a must read for all those who are interested to understand the politics of terror and establish a just and equitable world.

(Reviewer is a Delhi based Civil Rights’ Activist and Journalist. He can be reached at mdmahtabalam@gmail.com)