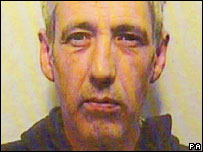 THE wife of a BNP council candidate accused of stockpiling chemicals for a civil war reported him after he stopped her watching the television, a court heard.

Kerena Cottage, 29, reported Robert, her husband of three-years, after he became "radical" in his religious and political views and removed the TV aerial to shield her from "government propaganda".

Louise Blackwell, prosecuting, said: "He became more religious and controlling of her.

"He removed the aerial from the television so she couldn't watch what he described as the brainwashing material being put out by the government."

School bus driver Cottage, 49, is jointly accused with former dentist David Jackson, 62, of conspiring to cause an explosion between 1 January 2006 and 30 September 2006.

Cottage admitted possessing explosives between the same dates during a previous trial.

But Jackson, of Trent Street, Nelson, denies the charge.

Yesterday, Manchester Crown Court, heard that Cottage took delivery of 11 boxes of chemicals and ingredients after Jackson wrote him a letter setting out what to buy.

Miss Blackwell said the investigation began after Mrs Cottage, who suffers from schizophrenia, reported her husband to her social worker who called the police.

She said: "At the start of the relationship all was well but it degenerated.

"Robert Cottage met a member of the BNP and both he and Kerena joined the organisation.

"Kerena says some times they would go to meetings very regularly, at which times she described his attitude as radical.

"He stood on two occasions for the local elections and wasn't selected.

"Through his membership he met his co-defendant, who wasn't a member but attended meetings.

"Kerena Cottage describes her husband beginning to discuss Asian and white cultures and began listening to what she considered radical radio broadcasts over the internet."

Some time after the chemicals were delivered on 27 September to Cottage's home in Talbot Street, Colne, police arrested him.

The Crown say Cottage also had BB guns, a cross bow, gas masks, two 56 kilogram bags of sugar, a box of mini flares, half a ton of rice, 34 gas canisters, a selection of pellets and an air pistol.

Also, officers found a series of printed bomb recipes from "The Anarchist's Handbook", downloaded from the internet.

"The prosecution say these recipes, particularly though not exclusively,show what the intention was of these defendants," said Miss Blackwell.

"Namely, they intended to make an explosion from what they had.

"These two men agreed to order chemicals that put together would cause an explosion and had the ability to endanger life or cause damage to property. They didn't have them for any lawful purpose."