NY Times: Blackwater Founder Is Said to Back African Mercenaries 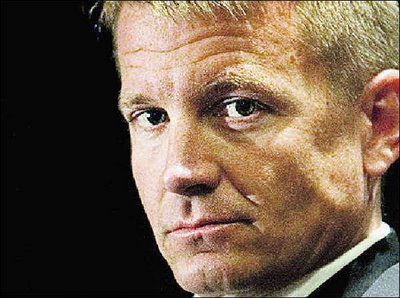 WASHINGTON — Erik Prince, the founder of international security giant Blackwater Worldwide, is secretly backing an effort by a controversial South African mercenary firm to insert itself into Somalia’s bloody civil war by protecting government leaders, training Somali troops, and battling Islamic militants there, according to Western and African officials.

The disclosure comes as Mr. Prince sells off his interest in the company he built into a behemoth with billions of dollars in American government contracts in Iraq and Afghanistan, work that mired him in controversy and lawsuits amid reports of reckless behavior by his operatives, including the deaths of civilians in Iraq. His efforts to wade into the chaos of Somalia appears to be Mr. Prince’s latest endeavor to remain at the center of a campaign against Islamic radicalism in some of the world’s most war ravaged corners. Mr. Prince moved to the United Arab Emirates late last year.

According to a report by the African Union, an organization of African states, Mr. Prince provided initial funding for a project by Saracen International to win contracts with Somalia’s embattled government. The Somali government has been cornered into a small patch of Mogadishu by the Shabab, a Somali militant group with ties to Al Qaeda.

Saracen International is a private security company based in South Africa, with corporate offshoots in Uganda and other countries. The company was formed with the remnants of Executive Outcomes, a private mercenary firm composed largely of former South African special operations troops that operated throughout Africa in the 1990s.

The company makes little public about its operations and personnel, but it appears to be run by Lafras Luitingh, a former officer in South Africa’s Civil Cooperation Bureau, an apartheid-era internal security force notorious for killings of opponents of the government.

With its barely functional government and a fierce hostility to foreign armies since the hasty American withdrawal from Mogadishu in the early 1990s, Somalia is a country where Western militaries have long feared to tread. This has created an opportunity for private security companies like Saracen to fill the security vacuum created by years of civil war.

Saracen International has yet to formally announce its plans in Somalia, and there appear to be bitter disagreements within Somalia’s fractious government about whether to hire the South African firm. Somali officials have said that Saracen’s operations — which would also include training a anti-piracy army in the semi-autonomous region of Puntland — are being financed by an anonymous Middle Eastern country.

Several people with knowledge of Saracen’s operations confirmed that the country is the United Arab Emirates.

According to a Jan. 12 confidential report by the African Union, Mr. Prince “is at the top of the management chain of Saracen and provided seed money for the Saracen contract.” A Western official working in Somalia says he believes that it was Mr. Prince who first raised the idea of the Saracen contract with members of the Emirates’ ruling families, with whom he has a close relationship.

American officials have said little about Saracen since news reports about the company’s planned operations in Somalia emerged last month. Philip J. Crowley, a State Department spokesman, said in December that the American government is “concerned about the lack of transparency” of Saracen’s funding and plans.

Mr. Prince for years has tried to spot new business opportunities in the security world. In 2008, he sought to capitalize on the growing piracy endemic off the Horn of Africa to win Blackwater contracts from companies that that frequent the shipping lanes there. He even reconfigured a 183-foot oceanographic research vessel into a pirate hunting ship for hire, complete with drone aircraft and .50-caliber machine guns.

In an interview in the November Men’s Journal, Mr. Prince expressed frustration with the wave of lawsuits filed against Blackwater, which developed a reputation in Iraq and Afghanistan for reckless behavior.

Mr. Prince, who said that moving to Abu Dhabi would “make it harder for the jackals to get my money,” said he intended to find business opportunities in “the energy field.”

Despite all of Blackwater’s legal troubles, Mr. Prince has never been directly accused of criminal activity.