They found the first grave in a thicket of spiny huisache trees clinging to the hillside outside the town of Iguala. Under a pounding midday sun, about a dozen men and women watched as an older man plunged a pickaxe into the heavy soil. Some offered advice on where and how to dig; mostly they looked on in silence

When he turned up a human femur, Mayra Vergara turned her back and broke into silent tears. She had hoped that today she might find some clue to the fate of her brother Tomás, a taxi driver who was kidnapped in July 2012, never to be seen again. But whoever lay in the shallow grave, she said, they deserved more than this.

“Even if it isn’t my brother in there, it is still a person. A person who deserved a proper burial,” she said, her face contorted in anger and grief. “And the question is when? When are they going to do something for us?”

The disappearance and probable massacre of 43 student teachers after they were attacked and arrested by Iguala’s municipal police two months ago has focused world attention on the horror of Mexico’s drug violence – and the official corruption that allows much of it to happen.

But the incident has also lifted the lid on the open secret of Mexico’s many other disappeared: amid the drug-fuelled violence of recent years, some 20,000 people have simply vanished.

‘In these hills there are probably hundreds of graves’ 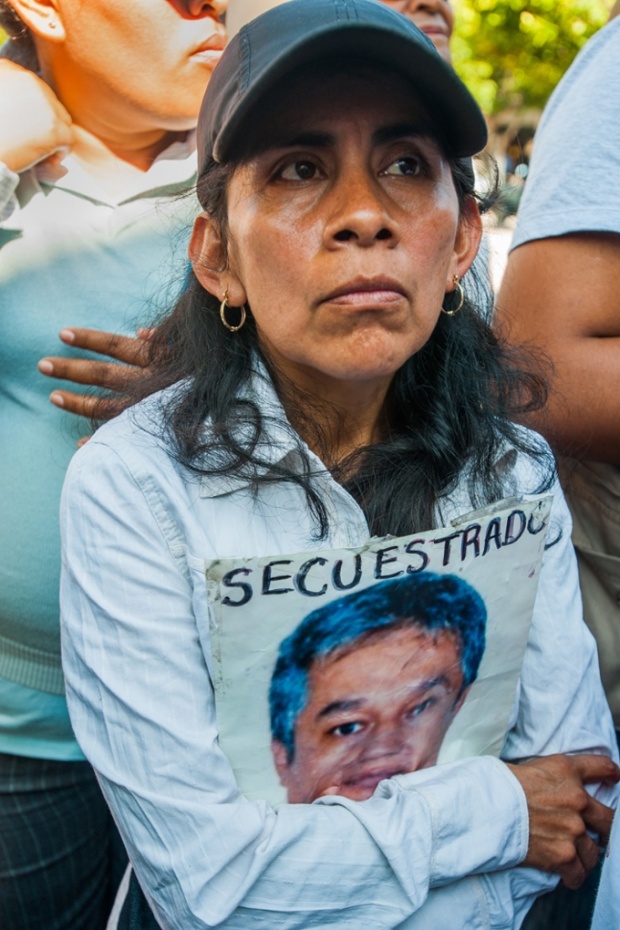 An unidentified woman carries a picture of a family member with the word ‘Kidnapped’ in Spanish. Photograph: Keith Dannemiller/for the Guardian

Relatives of the missing have largely remained silent for fear of retribution. Now, however, many have found new strength to denounce the terror imposed by criminal gangs – often in blatant collusion with state authorities.

“It is time to lose our fear and take advantage of the moment to say what we need to say so that everybody knows that this is not just about the 43,” said Claro Raúl Canaán, who was looking for some clue to the fate of two of his sons who went missing in 2008.

“In these hills there are probably hundreds of graves. In Mexico there are thousands.”

In the days and weeks after the students went missing, investigators found a series of mass graves just a few miles from the poverty-stricken outskirts of Iguala. Residents later told reporters how they had often seen convoys of gunmen– and municipal vehicles – heading up dirt tracks that lead to nowhere. They remembered the screams that sometimes pierced through the night.

Thirty-eight bodies have been removed from the mass graves, but DNA tests have shown that none is that of a missing student. So far, four have been identified, including a Ugandan priest who was reportedly killed after refusing to baptise a drug lord’s child.

The search for the students has since moved elsewhere, but over the past couple of weeks, relatives of “the other disappeared” began to get organised.

Already, data has been gathered on 200 cases. More are expected to come forward.

“It is so hard to go on like this without some kind of sign that will let us rest from all the pain, and all the waiting,” said Reina Marcelo, whose husband and son were abducted from the family’s used car lot in May 2011. “I am still frightened, but less so now there are a lot of us.”

The government wants everybody to forget what went on

It was this sense of common purpose which helped take a caravan of about 50 relatives into the hills on a recent morning, guided by information from a local farmer who said the area had “smelled very bad” about a year ago. Once there, they dispersed among the thorny trees looking for patches of sunken ground which suggested something lay buried beneath. Calls for shovels and pickaxes followed. Little plastic flags on sticks were ready to mark those that yielded bones or teeth.

“We are breaking the law, but we have to find a way of forcing the government to move,” said Miguel Ángel Jiménez, a member of a vigilante group which argues that Mexico’s security crisis can be solved by local militias and regional self-government. Now the group is also galvanising the search for older remains. “What the government seems to want is for everybody to just forget about what went on here.”

Distrust of the authorities also underlies a plan to develop a DNA database of the relatives, with a newly created NGO called Citizen Forensic Science, designed to guard against the authorities prematurely closing cases by handing over the wrong bodies to the wrong relatives.

While some searched among the trees or hacked away at the ground, other relatives in the group described years of fruitless visits to government and judicial offices that left them feeling officials were mocking their pain.

“Even if it isn’t my brother in there, it is still a person. A person who deserved a proper burial”

Others said they never even bothered to make an official report. After all, the fact that local authorities colluded with local criminal groups was common knowledge long before the students were attacked by municipal police and allegedly handed over to the Guerreros Unidos drug gang.

Francisca Soñanez’s father went missing in August last year while delivering newspapers. Two of her sons were dragged from the family home by armed men a month later. She assumed this was retaliation for having reported the first crime. She didn’t report the second.

In some cases the collusion appears just as blatant as in the case of the students: Canaán’s two boys were last seen within sight of a municipal police checkpoint; María Luisa Bastián’s grandson went missing from the city prison.

Laura García knew soldiers had bundled her brother Francis Alejandro and five others into a vehicle outside the family-owned disco in 2010 because of CCTV images on a disk pushed under her door. The soldiers came from the Mexican Army’s 27th battalion, based in Iguala – the same unit that did nothing to stop police attacking and disappearing the students on 26 September.

García’s case was taken up by several international human rights groups, but still no progress was made. “If they had paid attention to us before this wouldn’t have happened,” she said. “This whole thing with the students is like watching the same movie again. The faces of their parents are just like my mother’s.”

García has given up hope that her brother could still be alive, but many relatives still find some tainted solace in the idea that their loved ones could have been forcibly recruited into the gangs, an idea also nurtured among parents of the disappeared students.

This has meant many days hanging around the morgue after reading news of shoot-outs, as well as dangerous trips into poppy-growing areas, following rumours of slave labour.

For now, however, the search for the other disappeared is concentrated on efforts to pressure the authorities into meticulous examination of the graves the relatives are partially uncovering in those Iguala hills.

Sunday’s caravan returned to the city having identified six sites containing bones and one with clothes. They left as the leaden sun started to dip; federal police stretched yellow crime scene tape around the sites.

“At least we want to be able to bury them properly,” Vergara had said after seeing that first femur. “At the moment we don’t even have a place we can go to cry.”

Related: “Drug War Mexico: Politics, Neoliberalism and Violence in the New Narcoeconomy” — Book Review: “By the time of the presidency of Luis Echeverría (1970-1976), write Watt and Zepeda, the government of Mexico was already associating ‘all types of political activism with criminality and frequently with drug trafficking.’ Watt and Zepeda set up the national and international context at the time, painting in broad strokes the Mexico where the CIA and the DEA began to set up a ‘permanent drug war.’ …”