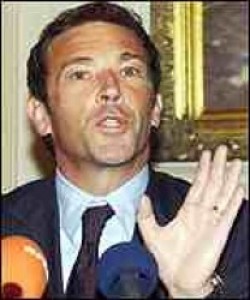 “VIENNA (AFP) — Austrian far-right leader Joerg Haider was driving at more than twice the speed limit after going to a nightclub when he crashed and died this weekend, court officials said Sunday.

“Haider was doing 142 kilometres (88 miles) per hour in a 70kph zone when he crashed in the early hours of Saturday, the prosecutors’ office said.
Prosecutor Gottfried Kranza did not say whether Haider had tested positive for alcohol. … “
http://afp.google.com/article/ALeqM5jBinL6eeuEGBxW1WIoo0h3lmNkpw

Haider, 58, who led the right into a coalition government from 2000 to 2006, polarised his nation and drew condemnation across Europe and beyond with his blunt anti-foreigner statements and for seeming to flirt with Nazi sympathies.

Last month, after years of retreat into provincial politics, he co-engineered a surge of Austria’s far right to 30 percent of the vote in a parliamentary election, mining discontent over feuding mainstream governing parties, inflation and immigration.

The governor of Austria’s Carinthia province suffered head and chest injuries when the government car he was driving went out of control and rolled over several times, police said. He was alone in the car. Police said they were investigating the cause of the 1:15 a.m. (2315 GMT) crash outside Klagenfurt, Carinthia’s capital.

”This is for us like the end of the world. He was also my best friend,” said Haider’s spokesman Stefan Petzner, who broke down in sobs on national television.

He said Haider had been heading to his home near Klagenfurt in the mountainous southern province for a family gathering to mark his mother’s 90th birthday. 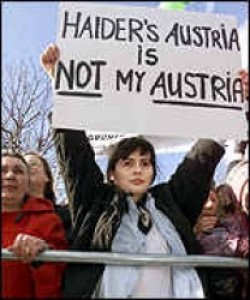 Unusual in Austria’s staid political world, Haider was a gregarious character who struck a popular chord among many ordinary people and had friendly personal relations even with his political adversaries. He was politically active from his teenage years in the affluent Central European country, becoming a full-time politician in 1977 for the far-right Freedom Party.

He drew international headlines with outbursts that looked like apologia for Nazism and by making foreign trips to see leaders like Iraq’s Saddam Hussein and Libya’s Muammar Gaddafi.

Haider reproached Austria’s government by citing the ”proper labour policies” of Adolf Hitler’s Third Reich. On another occasion he referred to Nazi concentration camps in a parliamentary debate as ”penal camps”.

His father was once a member of Hitler’s Storm Troopers. His mother was a teacher who had been a Hitler Youth leader.

Haider led the Freedom Party with a shock 27 percent of the vote into a governing coalition with the mainstream conservative People’s Party in 2000, stirring widespread condemnation and temporary European Union sanctions against Austria.

It was an awkward alliance that unravelled, causing an early election in 2002 in which the Freedom Party lost heavily, followed by a remake of the coalition.

After internecine power struggles within Freedom, Haider formed the breakaway Alliance for the Future of Austria in 2005. His new party became junior partner in the governing coalition while the Freedom Party defected into opposition.

In a national election in 2006, the Alliance — whose reins Haider had given to a protege while he turned full-time to Carinthian affairs — only just scraped past the 4 percent threshold to enter parliament.

Haider returned as party chief this year and, adopting a strikingly milder tone and declaring his openness to a coalition with any party, led the Alliance to 11 percent of the vote in the Sept. 28 election, behind Freedom’s 17.5 percent.

The result could reconfigure Austrian politics with the Social Democrats, which re-emerged as the largest party, likely to struggle to form a stable coalition if it ignores the right.

Austrian President Heinz Fischer, a Social Democrat, said Haider was ”a politician of great talent” who both enchanted and repelled his contemporaries.

Heinz Christian Strache, who took over the Freedom Party in 2005 and had publicly feuded with his former mentor, said: ”With his passing, Austria has lost a great political figure.”

There had been signs of reconciliation between Haider and Strache this week when the two met to discuss joint strategy to strengthen the right’s claim to a role in government after their successes in the Sept. 28 election.

Haider, a passionate skier and marathon runner, was married with two grown daughters.