Audi has looked into its predeccesors' Nazi affiliations, and the results are fairly damning

German businesses have a problem. For those active during the ’30s and ’40s lucky enough to have remained in business today, there inevitably comes a time when one important question must be asked: what did we do while the Nazis were in power?

For many, it’s an uncomfortable history lesson on the actions of their founders during Hitler’s regime. Deutsche Bank, one of the largest financial institutions in the world, dismissed its Jewish members and loaned the money that paid for the construction of Auschwitz. Hugo Boss, founder of the designer brand that carries his name, was a member of the Nazi party who designed the uniforms worn by Nazi soldiers and Hitler Youth members. The Quandt family, a majority shareholder in BMW, revealed that their factories employed an estimated 50,000 slave laborers from concentration camps, while the family profited from the takeover of Jewish-owned businesses. Ferdinand Porsche, whose car company now produces some of the world’s most revered sports cars, helped create the “people’s car” – or Volkswagen – which later became the Beetle. He reached the rank of SS-Oberführer (senior leader) and used the Volkswagen production facilities to manufacture military vehicles for the Nazis.

Several of the above companies commissioned their own investigations to examine the extent of their involvement in the Nazi regime, and in 1999 a landmark $5.2 billion settlement fund was established by the German government and German companies including BMW, Daimler (which owns Mercedes Benz), Deutsche Bank, Siemens and Volkswagen to compensate those who were subjected to forced labor under Nazi rule. 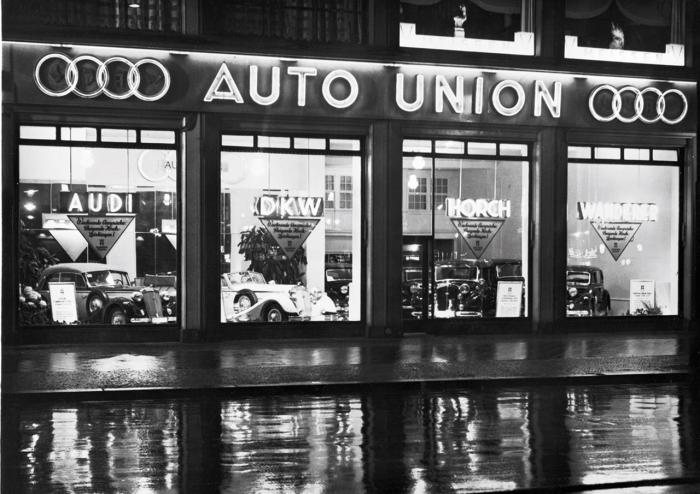 Now, it’s Audi’s turn to delve into its past. It has released the findings of a study into the Nazi affiliations of Auto Union, the automotive conglomeration which was incorporated into the Volkswagen family and merged with NSU to form the Audi NSU Auto Union – later shortened to just Audi. Audi also examined Dr. Richard Bruhn, installed as chairman of the Auto Union, a merger of four separate manufacturers, in 1932. Unfortunately, the results of Audi’s findings, documented by the manufacturer’s lead historian Martin Kukowski and historian Rudolf Boch from the University of Chemnitz, are pretty damning. “There can be no discussion about the closeness of Auto Union to [the Nazis],” the findings authors state. They continued, adding that the Auto Union and Richard Bruhn had been “firmly ensnared in the National Socialist regime.”

At Flossenbürg concentration camp, a sub-camp was established for Auto Union to use those imprisoned in the camps as forced labor to help construct tank engines. Unlike Oskar Schindler, the inspiration for Schindler’s List, who used his factory to shield Jewish workers from concentration camps, Bruhn and the Auto Union were shown to have “moral responsibility” for 4,500 workers killed at Flossenbürg. By comparison, Opel, another German automaker, operated throughout the duration of the Third Reich with negligible amounts of forced labor.

Bruhn himself was found to have close ties to the Nazi party. He was appointed a Wehrwirtschaftsführer, a title given to executives of companies considered important for the production of war materials. It also granted permission to circumvent employment laws with regards workers and employees so as to ensure production. The Auto Union was considered to be firmly embedded in the Nazi regime, while Bruhn, who became a member of the Nazi Party in 1933, met with Hitler and Albert Speer during his time as Chairman.

At the end of the war, Auto Union was liquidated and Bruhn was interned by British forces. He was subjected to denazification, where he accepted the responsibility for employing prisoners of war, but was released and allowed to move to Ingolstadt – the current home of Audi. Bruhn revived the Auto Union group in 1949, and was later awarded the West Germany Grand Cross of Merit in 1953 for his work at the company and his service to the nation. He successfully hid the extent of his collaboration with the Nazi party until his death in 1964.

The revelations surrounding Bruhn and the Auto Union’s use of forced labor forced Audi and the city of Ingolstadt to rethink the man branded on various parts of the company’s various global websites as someone who “guided the company with great competence” and enjoyed a high reputation post-war. “I’m very shocked by the scale of the involvement of the former Auto Union leadership in the system of forced and slave labor,” said Audi Works Council Leader Peter Mosch. “I was not aware of the extent.” Furthermore, the company was examining all products that bore his name – such as the Dr. Richard Bruhn pension fund. Ingolstadt’s mayor, Christian Lösel, told Wirtschafts Woche that the city is considering renaming Bruhnstraße, named for Bruhn.

For Audi, though, any fears that descendants of those harmed by Auto Union’s policy of using forced labor could sue the company for restitution will be allayed by its parent company Volkswagen Group. As one of the companies that helped establish the $5.2 billion compensation fund – and given Audi was (and is) a subsidiary of the brand – any claims against Audi can be directed there. In terms of brand reputation, though, it will be of little compensation to Audi, which hailed Bruhn as the “Father of the Auto Union.” As it transpires, our parents can keep even the darkest of secrets from us.