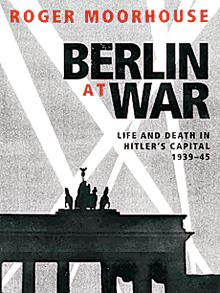 We know more all the time about the sufferings inflicted by Nazi Germany. Much of the horror seems imponderable, but there is no lack of sympathy with the victims. The greater mystery is why German society would abandon the tenets of civilization.

"Berlin at War" does a fairly good job of asking and, sometimes, answering questions about this mystery. Berliners knew that their Jewish, gay, Gypsy and handicapped neighbors were being deported to a dark fate. What did they do? Very little. What did they think? The Berlin imagination seems to have failed. A modern accounting lists 55,696 Berliners among the 6 million Jews killed in the Holocaust.

Roger Moorhouse, a British specialist in modern German history, helps to explain this by turning to the United States. Polish resistance fighter Jan Karski went to Washington in 1943 and met with Jewish leaders. He described what was happening in the concentration camps. Supreme Court Justice Felix Frankfurter responded, "Mr. Karski, I am unable to believe you." Frankfurter elaborated by adding, "I did not say this young man is lying. I said I am unable to believe him. There is a difference."

Moorhouse writes: "One has to assume that the vast majority of both Aryan and Jewish Berliners either knew nothing of the Holocaust or else were unable to believe and accept what little they might have heard."

Fear, prejudice and a beaten-down apathy played their parts as well. Before the war, Berlin was a city of 4.3 million where 200,000 had protested against Adolf Hitler's rise to the chancellorship. In April 1939, 2 million watched the long military parade through the city that celebrated Hitler's 50th birthday.

Over the next six years, Berlin's population fell by nearly half. Children were evacuated to the countryside, many under the tutelage of Nazi ideologues. Most households sent at least one male off to war, where 5 million German soldiers died. Air raids left Berliners exhausted and twisted with anxiety.

Unlike Dresden, Hamburg and other German cities swept by bombing-induced firestorms, Berlin was not hammered from the skies into a charnel house. Stone, brick and concrete, and wide streets, seem to have kept conflagrations at bay and limited the casualties to about 50,000. In 1943, Britain's Royal Air Force hoped a massive bombing effort aimed at Berlin would break the regime. After one of these raids, a foe of the Nazis asked in her diary: "Why does no one stand on the street and shout 'Enough! Enough!'? Why is no one going crazy? Why is there no revolution?"

There were revolutions that swept several German cities in the imperial collapse that ended World War I. But even Operation Valkyrie, the assassination and coup attempt directed by German officers against Hitler in 1944, caused barely a stir among Berliners.

Moorhouse uses many diaries, journalist accounts and SS "mood reports" to piece together his book. The experience seems to have left him wavering, uncertain of how to account for the Nazi regime's endurance.

At one point, he writes:

"Even the rising death toll on the Eastern Front failed to spark any widespread civilian opposition and resistance to the Nazis; on the contrary it engendered a sense of apathy and depression. Nevertheless, as the war ground on to its conclusion, the patience and stoicism of the Berlin public would be tested to destruction."

Yet even as the Soviet Red Army neared Berlin, members of the Hitler Youth handed out cyanide capsules at a performance of the Berlin Philharmonic. This was fear and resignation, not defiance.