By ALAN HALL IN BERLIN

THE colossal extent of slave labour used by modern-day German blue-chip companies to get rich during the Third Reich has been laid bare by the nation's top business magazine.

WirtschaftsWoche has published a league table of show illustrating the Nazi past of top German firms like Bosch, Mercedes, Deutsche Bank, VW and many others, which involved the use of almost 300,000 slaves.

The league table follows revelations earlier that Audi, which was known as Auto Union during the Nazi period, was a big exploiter of concentration camp supplied slave labor, using 20,000 concentration camp inmates in its factories.

Many of the companies listed by WirtschaftsWoche have already had internal reckonings with their Nazi past.

Daimler admitted as far back as 1986 that it had employed 40,000 forced labourers under appalling conditions during the war to allow it to reap enabling it to reap massive profits. 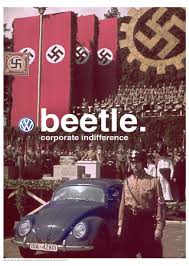 VW, builder of the 'People's Car' that morphed postwar in the VW Beetle, employed 12,000 slaves in the most terrible of conditions at its plant in Wolfsburg. The chemical and pharmaceutical behemoths BASF, Bayer and Hoechst employed 80,000 slaves.

Bayer celebrated its 150th anniversary last year with no mention in the official blurb about the Nazi years from 1933 to 1945.

There were also companies which enriched themselves through Nazi rule with Publishing giant Bertelsmann grew rich publishing gung-ho pro war books for Hitler Youth members and, according to Handelsblatt, 'profited massively' from contracts with the German armed forced at the Nazi Party central headquarters in Munich.

Germany's largest bank, Deutsche, did not employ slaves but became hugely wealthy under Nazism. The bank sacked all Jewish directors when the Nazis came to power and from 1938 onwards became the richest in Germany by taking part in the 'Aryanising' - or taking over - of Jewish-owned businesses.

The research director of the German Museum in Berlin said that what it has admitted so far about its past is merely a 'house history'. Companies such as the sporting goods supplier Adidas and the high street retailer C&A are still working on company histories about their time under Nazism.